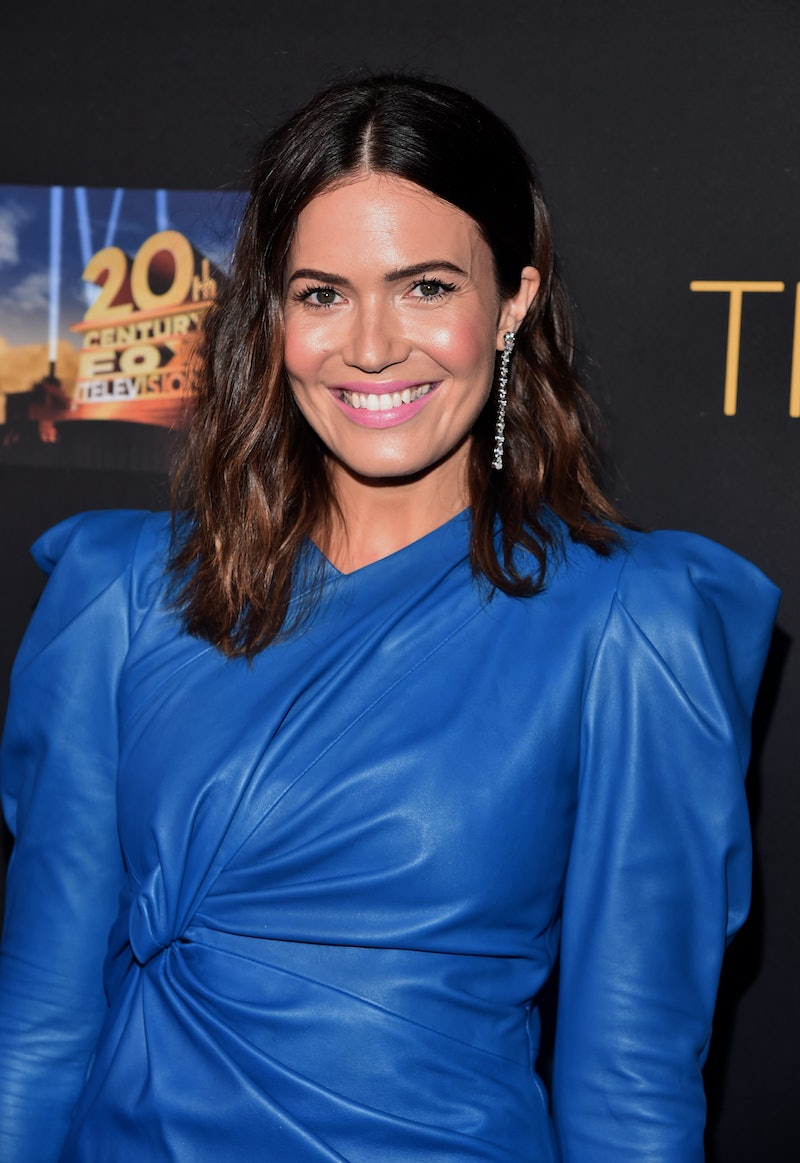 She might be part of one of the most heartbreaking love stories on TV, but now it sounds like she's living her own happily ever after. According to E! News, This is Us star Mandy Moore and Taylor Goldsmith got married on Sunday in Los Angeles after more than three years together. Moore's rep has confirmed that Moore and Goldsmith are married to Bustle.

As sources close to the reported wedding told E!, the event was "an intimate backyard wedding at Mandy's home that started just after sundown on Sunday evening." Reportedly, it was a very quiet and private event, with just around 50 people attending, which makes sense if she wanted to keep everything on the down low. The witness added that the wedding had a "boho" theme, with "rugs on the floor surrounding the altar. The flower arrangements were beautiful with lots of large feathers."

So far, the actor hasn't confirmed or denied the news herself, and she's been quiet on social media since November 16. Maybe when she returns to Instagram, it will be to share wedding photos? Fans can only hope — especially since Moore has shared glimpses of her relationship with Goldsmith, who is in the band Dawes, for awhile now.

The source also said that following the ceremony, their guests — who reportedly included Moore's costars Sterling K. Brown, Chrissy Metz, and Milo Ventimiglia — headed over to The Fig, an event space in Highland Park, where they were treated what sounds like quite a food spread, including a whiskey station and wine.

Not only did wedding insiders say that there were reportedly 12 different cakes for guests to try, which is obviously a dream for anybody with a sweet tooth, but that there was also a pretty extensive food spread for dinner, including a "number of food stations around the venue, including meat, chicken, vegetarian, raw food, flat bread, cheese and charcuterie and more."

The insider also told E! that Goldsmith performed at the wedding, along with a few of his friends.

But even though Moore has remained silent on her own social media, that hasn't stopped her friends from sharing a few details of her big day. In fact, makeup artist Jenn Streicher shared a few photos in an Instagram post, including a close up of Moore's makeup, which included plenty of sparkles.

"Yesterday was pretty magical. I laughed, I cried and I danced real hard," Streicher wrote in her caption.

From the photos, it looks like Moore selected a vintage-inspired pink dress for the occasion, along with a veil that was embellished with pearls.

Moore and Goldsmith got engaged in September 2017, after celebrating two years together. They've kept most of the details of their relationship pretty private in that time, so it makes sense that they'd have a low key wedding, too.

Hopefully, Moore will update fans on this big event in her life soon, and for now, we will all just have to settle for drooling over the photos Streicher has shared so far. Congratulations to the happy couple!