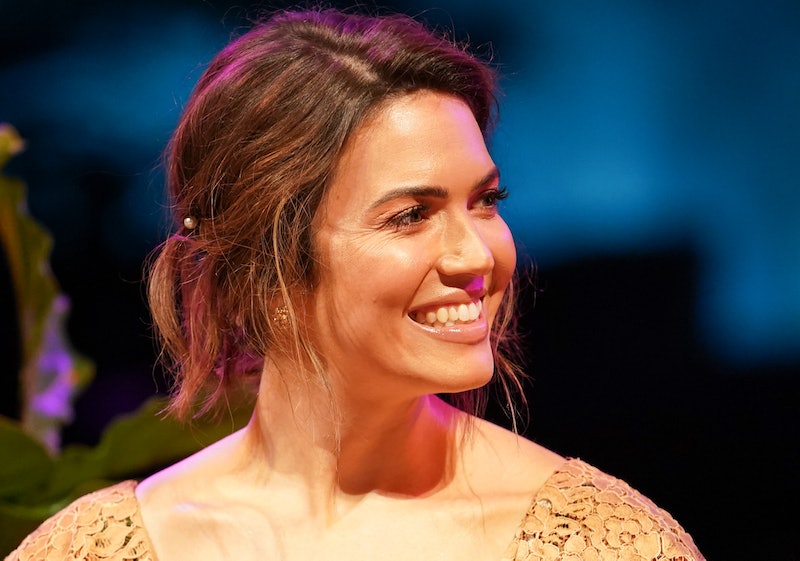 Everyone's been watching Mandy Moore on This Is Us for the past few years, but fans that remember her music heyday in the early 2000s have been waiting patiently for new music for over a decade, and their moment has finally arrived. Mandy Moore's her first song in 10 years, "When I Wasn't Watching," marks a huge, well-deserved comeback after a long journey to find herself once again.

"When I Wasn't Watching" is a sonic departure from the sugary pop hits of the early 2000s, when Moore released her first single "Candy," and her folk-laden singer-songwriter tracks that filled her later albums. Instead, with this new song, Moore creates a melancholy pop mid-tempo, with elements of '70s rock grooves and '80s hazy synths that soundtrack her self-reflective lyrics. The song might be different from her bubblegum staples like "In My Pocket" and "Crush" that the world jammed to almost daily, but that's the whole point.

Aside from a cover of Little Feat's "Willin'," recorded for the soundtrack of This Is Us, Moore has been largely absent from the music scene since her last album Amanda Leigh was released in 2009, and not for a great reason. Moore told The New York Times in February of 2019 that her "unhealthy" relationship with her ex-husband Ryan Adams allegedly played a large role in interrupting her music career. (He denied all allegations detailed in the piece at the time.) After speaking out, Moore posted on Instagram in July 2018 that she was getting back to music, saying that it was "time" for her to return. "I’m not scared anymore. No more excuses. No more allowing someone’s else insecurities to dictate my relationship to music and singing. Boom."

"The idea of diving back into music after so much time and personal change was really intimidating to me for a while," Moore said about "When I Wasn't Watching" in a statement, as reported by Billboard. "But then I finally realized: I'm the only person who can make this move. It all has to start with me." Moore's statement continued, shedding some light on the main themes of the song. "I think everyone's had the experience of feeling lost and not quite understanding how you've found yourself at a certain point in your life. And I think the key is not to judge yourself for that," she said. "I'm a big believer in the idea that what you've journeyed through is ultimately going to factor into the person you become, and how you'll greet whatever big challenge you face next."

"When I Wasn't Watching" is the first taste of her upcoming, as-yet-untitled album, which is due to be released sometime next year according to Billboard, and Moore made it clear in her statement that it's a "purposeful departure" from her past music, with a focus on live instrumentation in the studio. "No one's playing to a click track — it's all happening live on the floor, which gives everything a magic and spontaneity that's so different from what I've done on any other record," she said. "And on top of that we're recording to tape, so there's no reworking or editing: a take is a take. At first that was scary, but now it's become a fun sort of pressure that really fuels me."

Moore also revealed that another single was due before the end of the year, and she's never felt better about the music that she's releasing. "I very much feel like I'm at the helm of the ship now, where I'm stepping back into music completely on my own terms," she said. "Everything that's happened up until this point has gotten me to where I am today, and I'm so excited to just keep moving forward."

With a new song and an upcoming season of This Is Us on the horizon, Moore is certainly moving forward. In a tweet celebrating the release of her new song, the performer promised, "More to come!" Fans will be waiting.

More like this
Shakira Joked About An Early 2000s Video Of Her First Camera Phone Encounter
By Stephanie Topacio Long
Netflix Reveals First Look At Wednesday In The 'Addams Family' Spinoff Series
By Bustle Editors
17 Years Ago, 'Hannah Montana' Reportedly Almost Cast This 'Gossip Girl' Star
By Grace Wehniainen
Taylor Swift Wanted To Be In 'Twilight: New Moon,' According To Its Director
By Grace Wehniainen
Get Even More From Bustle — Sign Up For The Newsletter