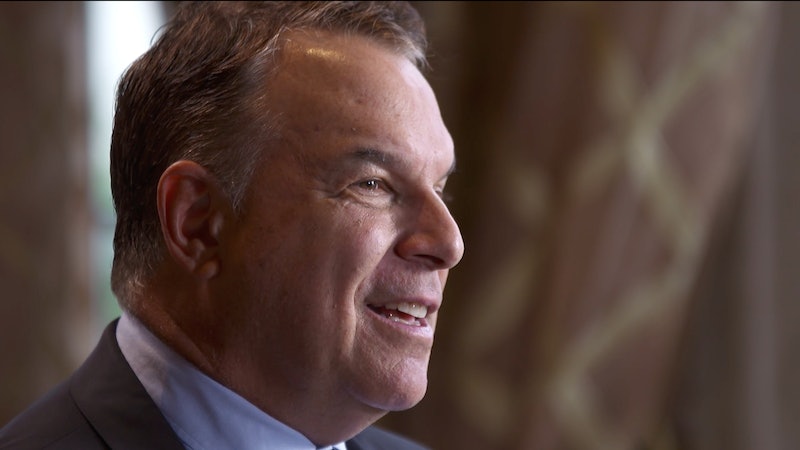 Mar-a-Lago member and billionaire Jeff Greene is running for Florida governor — and despite his membership at the president's "Winter White House," Greene is campaigning on an anti-Trump platform. With less than three months to go before the primary, Greene entered the crowded race last week, and released his first set of TV ads Tuesday.

Though formerly a Republican, Greene is running as a Democrat, on a platform that emphasizes his willingness to go to toe-to-toe with President Trump on a number of controversial issues, including gun rights and affordable health care. One of the ads — called "Stand Up to Trump" — is a message referencing both Greene's policy ideas, and a specific altercation he had with the president at Mar-a-Lago last December.

The ad features six seconds of cellphone video in which Trump and Greene appear to be arguing in an upscale dining room. The camera pans from Trump, who is standing at a table where Melania Trump, Hope Hicks, Stephen Miller, and Kellyanne Conway appear to be seated, gesturing emphatically, to Greene, standing across looking equally incensed.

Greene told Politico that the incident occurred at Trump International Golf Club in West Palm Beach, Florida. Trump apparently confronted him over his support of Hillary Clinton and over a 2016 interview Greene had done with Palm Beach Daily News in which he said believed the accusations of sexual assault against the then president-elect. Trump has denied all of the allegations against him.

"I walked by and he screamed, he pointed at me: 'Jeff Greene!' Really loud. And, of course, everybody looks up,” Greene told Politico. "And he starts ranting and raving: 'You went against me in the media during the campaign!' Over and over again. 'You support Hillary Clinton!'" Green said Trump became "unhinged, turning red, flailing his arms," during the argument, and as a result his wife began filming it on her phone.

"Jeff is the only candidate in America who is willing to stand up to Trump in his own dining room," the ad voiceover says. "Sure, that took some backbone. But that's exactly what it's gonna take to stand up to him as governor of Florida."

Despite a failed Senate bid in 2010, Greene lacks name-recognition among Democratic voters in Florida. However with an initial ad campaign worth a whopping $2.9 million, he is likely signaling willingness to exercise his financial might in getting out his anti-Trump message.

Greene's second ad is a 60-second introductory bio that talks about his blue-collar roots and growing up with a single mother after his father died at age 51. He says, "In Florida today, people are barely live week-to-week, paycheck-to-paycheck, and I know exactly what it’s doing to them because it happened to my family."

Estimated at a net worth of $3.8 billion, Greene is far from working class now — in fact, he made it big betting on subprime mortgages before the housing crash. Other candidates, including Tallahassee Mayor Andrew Gillum, have signaled they might use Greene's financial status and the fact that he is a real estate tycoon who profited off the 2007 recession to paint him as out of touch with working class values.

However, Greene told the Associated Press last week that he and his wife intend to donate half their money to philanthropic causes, and that the governor's race is another way of improving the lives of Floridians.

"We’re going to give all this money away anyway, what we really want to do is make a big impact and a difference in the world and make people’s lives better," he said. "Whether we spend $100 million, $50 million, $200 million — whatever it is, we will spend whatever it takes to make sure that our message is heard at least equally to what the Republican message has been."