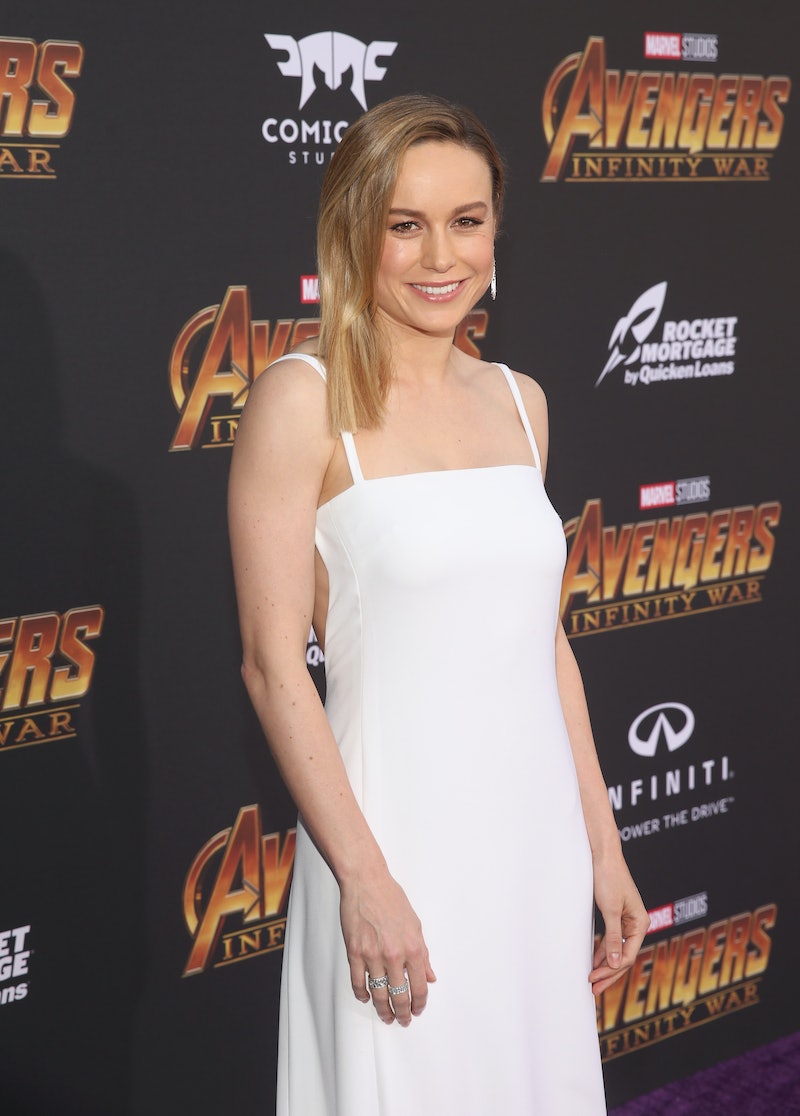 Captain Marvel is set to come out in March 2019, and while that's still a long time away, it's never too early to start getting excited. That's because the plot of Captain Marvel — at least what we know so far — already sounds too amazing to be true. The movie takes place in the '90s, as Screen Rant reports, meaning that the era of Walkmen, mood rings, and roller blades will come back to life in order to tell Carol Danvers' (Brie Larson) origin story. As if that's not enough to prove that the MCU's next superhero will become a fast fave, Captain Marvel will also most likely provide lots of new insights into Nick Fury's history.

Spoilers ahead for Infinity War. As fans know, Nick was the one who called Captain Marvel at the end of Infinity War, right before he disappeared. He sent the message using a '90s-esque beeper, so that should give you a sense of the timeline of Captain Marvel. While the gadgets of yore will be great to see in the upcoming film — one of the last from the MCU's Phase 3 before Avengers 4 finishes it out — Captain Marvel will mostly be so exciting because of the titular hero's powers. As Marvel Studios' president Kevin Feige told Variety, "You're gonna get the most powerful superhero that we've ever introduced, with I think one of the most unique and inspiring origin stories."

It's true that Carol Danvers' origin story is inspiring — especially because she's the first female MCU superhero to get a standalone movie. Once you know a little bit about her, you'll realize that she's the perfect person to break that glass ceiling, because, well, she kicks ass in basically every way possible.

After starting off in the comics as Ms. Marvel, Carol Danvers took over the title as Captain Marvel in 2012 in the comic Captain Marvel #1. The hero has a wide range of superpowers, including the ability to fly, to sense future danger, and to absorb and redistribute energy. Oh yeah, she can also shoot fire light energy from her bare hands. Feige wasn't joking about the whole "most powerful superhero" thing, and Brie Larson has taken to Instagram to show how she's preparing for the role. Hint: it includes a lot of gym time.

Carol Danvers' story in the comics started out with her joining the Air Force, which eventually led to her joining the Intelligence unit — where she met Fury — and then NASA. With NASA, Danvers came into contact with aliens, specifically the Kree, which viewers saw in Guardians of the Galaxy Vol. 1. The other aliens include a new species, the Skrulls, and according to ScreenRant, Danvers becomes embroiled in a battle between the Kree and Skrull armies.

In the comics, Danvers gets her powers after getting mixed up in an explosion along with a Kree alien, Mar-Vell, who Variety reports will be potentially played by Jude Law in the movie. As a result of the explosion, some of Mar-Vell's alien abilities get transferred to Danvers, and so begins the superhero transformation. According to Vulture, the plot of Captain Marvel will involve the superhero facing off with the Skrulls, the alien race which can shape-shift. Not only can Skrulls adopt the appearance of other beings, but according to Cnet, they can also assume one's memories and powers.

As Screen Rant reported, Larson has taken flight training at the Nellis Air Force Base in Nevada. So it seems like Captain Marvel will tell the full origin story of Danvers' journey to becoming the most powerful superhero of the MCU. It will be the perfect lead up to May 2019's Avengers 4, when Captain Marvel will presumably help the remaining Avengers defeat Thanos.