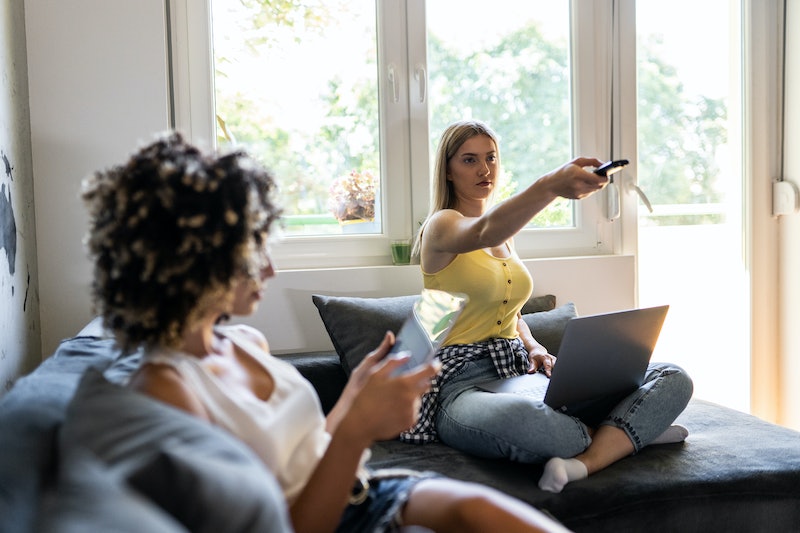 You know how it is: you get home from a long day of work, rid yourself of pants, turn on Netflix, and it’s off to the proverbial races. Six hours of Agents of S.H.I.E.L.D. later and you’ll call it a night. You aren’t alone in your preferred relaxation method — according to a new report, over 80% of Americans flip on the TV after a hard workday. But the same result also says marathon-watching your favorite show is tied to an 81% increased likelihood that you’re also depressed and anxious.

The report, conducted and published by the online recruitment advertising network Simply Hired, concluded that if you want to be less depressed and anxious, you might want to try turning off the TV and… playing cards instead. Because yes, the report found that people who play cards after work tend to be less stressed out than people who play video games, watch TV, or vent to a roommate. Let’s not hate on playing cards — give me a rousing game of Uno with my kid sister-in-law and I’m down. But what the study concluded was that boomers (the ones who are more likely to play cards than video games) are therefore better at truly relaxing than millennials.

Here’s the thing, though: the survey of 1,000 employees found that it was more relaxing (AKA, associated with less depression and anxiety) to "talk" to your roommate after work than to "vent" to your roommate after work. Here, talking meant casual conversation rather than the deep, vulnerable work of venting. And that’s emotional labor that millennials have to do, because oftentimes, there’s no other choice: this world is quite literally a trashfire, inherited from the exact folks who are more likely to play a stress-free game of cards and talk, rather than vent, to their roomies or friends.

And maybe it’s just me, but I appreciate the emotional honesty of being able to be open enough with your roommates to vent about your day — and then settle down together and sob to a few solid hours of Jane the Virgin. Because it might not be that marathon-watching and venting aren't causing our depression and anxiety. It may well be, instead, that our depression and anxiety are making venting and marathon-watching the most emotionally viable options after dealing with a structurally oppressive and burnout-inducing workplace all day. So you do you, marathon-watchers of the world — because your coping choices are just as valid as you are.

More like this
Kourtney Kardashian’s Wellness Guru Shares Her #1 Tip For Better Health
By Taylor Jean Stephan
Here’s Where The NHS Nurses’ Strike Currently Stands
By Sophie McEvoy
10 Primal Movement Exercises That'll Improve Your Mobility
By Carolyn Steber
Here’s What Health Means To People In 2023
By Isabella Biedenharn
Get Even More From Bustle — Sign Up For The Newsletter
From hair trends to relationship advice, our daily newsletter has everything you need to sound like a person who’s on TikTok, even if you aren’t.