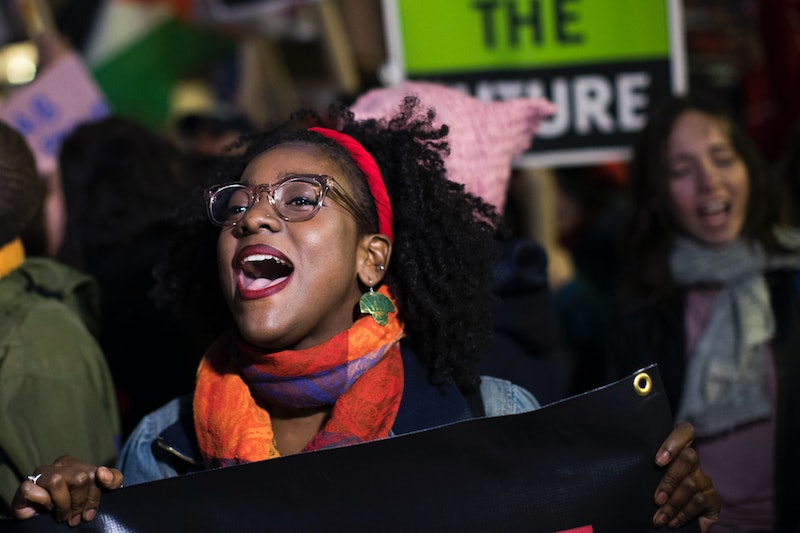 Thousands gathered on the National Mall in Washington, D.C. on Sept. 30 to highlight the racial injustices that black women still face. As part of the March For Black Women, protestors came up with signs to show solidarity with the cause, signs that were as powerful as they were creative.

The March For Black Women coincided with the March For Racial Justice in the capita on Saturday, but these two protests aren't in competition with each other. Instead, the March For Black Women is meant to show the unique challenges faced by black women, Farah Tanis, co-founder of the Black Women's Blueprint and one of the organizer of the event, told The Root. The two protests will eventually meet at Lincoln Park in Capitol Hill before marching together to the Justice Department and the National Mall.

Protestors are marching against “the propagation of state-violence and the widespread incarceration of Black women and girls, rape and all sexualized violence, the murders and brutalization of trans women and the disappearances of our girls from our streets, our schools and our homes," according to the March For Black Women website.

“It’s difficult getting the issues specific to black women and girls centered within the racial-justice movement of this nation,” Tanis told The Root. “When we say maternal mortality, I don’t think people get that it disproportionately affects black women.

The March For Black Women will also commemorate the 20th anniversary of the 1997 Million Woman March, in which 500,000 black women united on Benjamin Franklin Parkway.

I'm Rooting For Everybody Black

One sign was a direct reference to HBO's Insecure creator and actress Issa Rae from an interview on the Emmys red carpet. When Rae, whose own show didn't garner any Emmy nominations despite critical acclaim, was asked who she was rooting for at the award ceremony, she said, "I'm rooting for everybody black!"

Other signs read: "Black women are being credited with being foot soldiers, but we're strategist too," "March against white supremacy," and "My sisters are black and trans, you mess with them, you catch these hands."

Some wielded their creative chops in creating their signs.

I Will Change What I Cannot Accept

Beyoncé Wouldn't Put Up With This

As activist-writer Preston Mitchum said on Twitter, "always remember to incorporate Beyoncé" when it comes to the topic of intersectional feminism.

Women carried signs bearing "Say Her Name," the social movement to bring awareness to black female victims of police brutality after Sandra Bland's fatal encounter with the police in 2015.

Another sign read, "Leave no one behind enemy lines," which is the slogan for the military.

We Have Nothing To Lose But Our Chains

One sign featured a quote by Assata Shakur, a political activist. She said, "We have nothing to lose but our chains" in her autobiography.

A Black Feminist Could Be Governor

One sign took the opportunity to tout the political campaign of Stacey Abrams, the current Democratic House Minority Leader for the Georgia Assembly. Abrams is running for governor of Georgia in 2018 and if elected, she will be America's first black female governor.

63 Cents Is An Outrage

One woman carried a sign that called out colorism within the black community. "Recognize your light skin and/or mixed skin privilege" it read.

Trust Me and I'll Trust You

Young girls held up signs that read "Trust me and I'll trust you" and "All women have rights."

Marchers showed up in droves in make powerful statements with these signs and to support black women.

More like this
Amanda Gorman Shared A Powerful Message On Meghan Markle’s Penultimate Podcast
By Darshita Goyal
MOBO Awards Found Kanya King On The Woman Whose Grit & Determination Spur Her On
By Kanya King
Prince William Condemns “Unacceptable” Comments Made To A Black Guest At Buckingham Palace
By Shahed Ezaydi
The David Beckham Qatar Controversy, Explained
By Sophie McEvoy
Get Even More From Bustle — Sign Up For The Newsletter