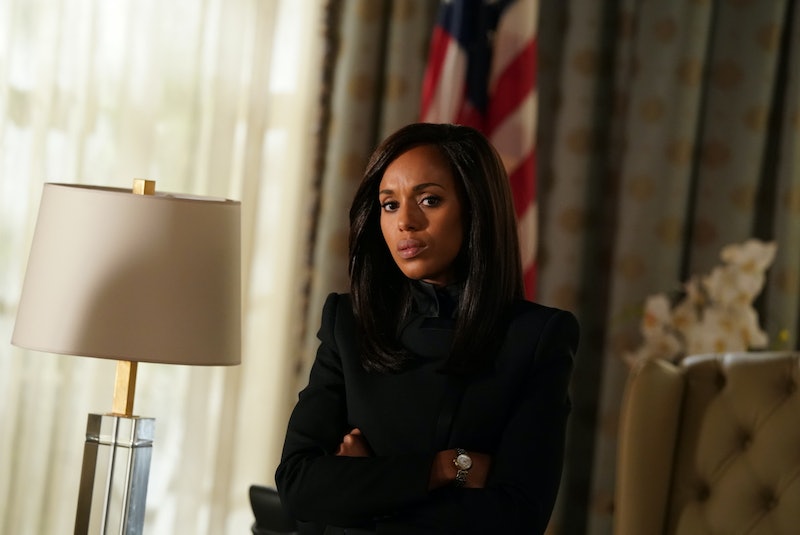 For just a little over six seasons on Scandal, Olivia Pope has been strutting down the halls of the White House and through the streets of Washington, D.C. handling literally everything. From getting others new identities, to rigging a Presidential election, and even helping a woman become the first Commander-in-Chief, Olivia has done it all over the years. But while she's undoubtably strong and capable of fixing almost any crisis that comes her way, Olivia has also been underestimated, disrespected, and painted as a villain on more than one occasion. Her hard work and badass leadership skills have continually been reduced to the affair she once had with former President Fitz. But in Oct. 19's episode Olivia Pope, finally she gets the praise she's always deserved, thanks to Marcus.

The episode begins with Fitz arriving at his Vermont home for the first time since Mellie was elected President, with the media speculating about his next move and whether or not he’s actually done with Olivia. Clearly this is the question swirling around in everyone's mind. With Marcus by his side, Fitz decides to rough it and becomes the first former President to drive himself around and cook his own food.

While brainstorming with Marcus about his upcoming book, Fitz takes offense to the suggestion that Olivia Pope played a huge role in his political success over the last eight years. Freeze and rewind. Anyone who watches Scandal knows just how much Olivia Pope has not only done, but has sacrificed — family, friends, a reputation — for Fitz, so what the heck is he offended about?

"Olivia is Hillary Clinton, Beyonce and Sista Souljah all in one," Marcus declares to Fitz, who just shrugs, confused about the last part of that comparison. And after one too many drinks the men have it out. Marcus calls out Fitz for downplaying just how much Olivia has done for him. To say that Marcus goes off would be an understatement.

"You're the worst kind of entitled, because you don't even know if you're entitled," he spews. "A black woman held you up and now you're telling the whole world how well you fly." He finishes his much-needed tirade by making it crystal clear to Fitz, since he's seemed to have forgotten, that after all Olivia Pope has done for him he allowed her to be reduced to nothing more than another home-wrecking, angry Black woman in the eyes of the public. Fitz just stands there sulking. Checkmate.

While this particular incident might have taken place in a fictional universe, the treatment of Olivia Pope mirrors exactly how Black women are treated every day. Whenever their skills or expertise are needed Black women are treated in a way that says they're good enough to get the job done, but not good enough to get the credit when it's all said and done.

In fact, a report from the nonprofit Institute for Women’s Policy Research, showed that Black women work more often and yet make even less in all areas. Black women also voted more than any other demographic group in 2008 and 2012. In 2014, they voted more than other groups with the exception of white men and women — but black women are not represented at the same rates in local and national politics.

With the exception of a Black Lives Matter episode in Season 4, Rowan’s complex about being controlled by white people, and Mama Pope's gem-dropping speech about men making it to the top on the backs of Black women, race is rarely addressed in Scandal. That's sad because race does in fact matter, especially in today's climate. There are a unique set of challenges that Black women face from within and outside of their communities, and to act like they don't or to gloss over their achievements, like Fitz did in this episode, is disheartening.

Olivia Pope may be a tad crass, occasionally reckless, possibly an alcoholic, and maybe even a "home wrecker," but despite all of these labels no one can deny that she's pretty badass. She's one of the many women characters on the show who have always been just as capable and hard-working as the men, if not more so. And it's about damn time Black women like Olivia get the recognition they deserve.

More like this
UK Viewers Will Have To Wait To Watch The Handmaid’s Tale S5
By Maxine Harrison
Two UK Cities Are Now In The Running To Host Eurovision 2023
By Sam Ramsden and Rachel Mantock
Where Is Lionel Dahmer Today? Jeffrey Dahmer’s Father Reflected On The Serial Killer’s Death In 2020
By Brad Witter
Here's What Jeffrey Dahmer's Dad Has Said About His Other Son, David
By Grace Wehniainen
Get Even More From Bustle — Sign Up For The Newsletter