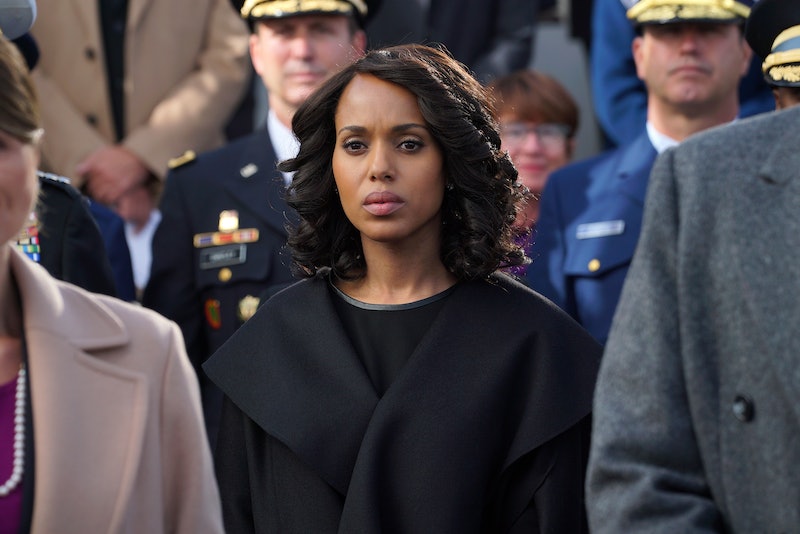 The most recent season of Scandal was a pretty wild ride, but if you thought things for Olivia Pope and the gang couldn't possibly get any more bleak in the show's final season, then wow, are you wrong. ABC just released Scandal's Season 7 poster, and it's already hitting fans right in the feels.

The Season 7 poster shows Olivia from behind, sitting alone on a park bench on a dark night in Washington with her white hat right next to her. Looming in the distance is the Capital Building and the Washington Monument. The poster was shared on the official Scandal Twitter account on Sunday afternoon along with the caption, "The monumental Final Season begins October 5. #Scandal."

It obviously doesn't reveal much about what viewers have to look forward to during the final season, but if there's anything to be learned from a Shondaland series, it's that there's never any shortage of drama. And considering the fact that last time we saw Olivia is when she re-upped B-613 and found out that Cyrus was behind the assassination of Frankie Vargas, it might be safe to say that some dark things are in store for this last season.

ABC made the official announcement that the Shonda Rhimes-created political drama is set to come to an end back in May, citing Rhimes' desire to wrap up the storylines on the show rather than having them die out. That's definitely understandable, but that doesn't mean fans won't miss having Scandal make up part of their TGIT lineup. Once the Season 7 artwork was released, Twitter reacted accordingly.

Yeah, this pretty much sums things up. One could only hope that there are at least a few hopeful moments to look forward to in this last season.

At the very least, this is one thing that doesn't necessarily have to come to an end.

Spin-offs can be pretty tricky, especially when they don't meet the bar set by the shows that come before them. But there's no denying that, whether it centers around Olivia and Fitz or not, the thought of a Scandal spin-off actually sounds pretty awesome.

Just As Things Were Heating Up...

There really isn't a word to describe how wild things got on the show during Season 6, but there's probably a rare chance that each episode didn't leave you on the edge of your seat from the beginning to the very end. It seems like things are really about to pick up again, and hopefully the writers will be able to tie up all the loose ends in every storyline by the time the series comes to a close.

There were way too many insane revelations made in last season's finale. And thanks to all of that, it might be safe to assume that the upcoming episodes won't be holding back any punches.

So yeah, Scandal is coming to an end, and if you're one of the many people who's currently in a really emotional state about it, pour yourself a glass of wine à la Olivia Pope and drink to the fact that you're in store for one last ride with Olivia and the Gladiators.

More like this
Everything To Know About 'Monarch' Season 2
By Gretchen Smail
Is Blake Lively Or Penn Badgley The Richest 'Gossip Girl' Star From The OG Series?
By Hugh McIntyre
Theo James Revealed The Truth About His 'White Lotus' Nude Scene & Fans Can't Cope
By Stephanie Topacio Long
The 'Kenan & Kel' Reunion On 'SNL' Took A Dramatic Turn, Thanks To Keke Palmer
By Brad Witter
Get Even More From Bustle — Sign Up For The Newsletter