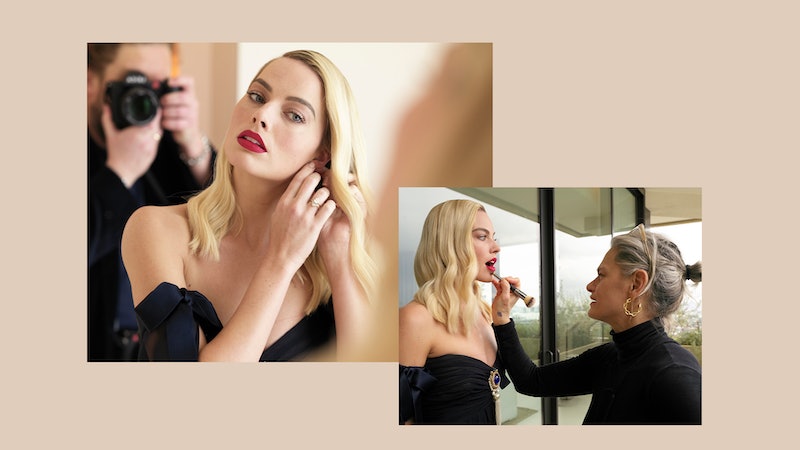 Margot Robbie isn't French, nor is she a '90s supermodel — but the Australian-born actor could have passed for both at the 2020 Oscars on Sunday night, and it wasn't just because she was wearing a vintage Chanel dress from the mid-'90s. From her strong brows to her classic red lip, Robbie delivered Claudia Schiffer-meets-Vanessa Paradis vibes, and Pati Dubroff, Robbie's makeup artist, says those not-so-subtle beauty nods were 100 percent intentional.

Dubroff knew exactly what she wanted to do as soon as she saw the Oscar nominee's gown. "I was like, red lip — it has to be a blue red lip," she says. Dubroff says a blue red hue complemented the midnight blue tones of Robbie's dress, and it also lifted and brightened the overall look.

"There was this vibe that I had in the back of my mind — this is a cool '90s supermodel who's going to the Oscars," Dubroff adds. "It was like Claudia [Schiffer] or Christy [Turlington] going to a really fancy event — that cool girl thing where it's like, throwing on the red lip and keeping everything else pretty chill."

The first step in achieving a strong red lip like Robbie's is to hydrate your pout, so Dubroff applied a balm and let it set before doing anything else. "You don't want to put intense matte velvety lipstick on a dry lip — you want it on a hydrated lip because it has better hold and a more beautiful finish," she says.

Next, Dubroff patted on CHANEL Rouge Allure Liquid Powder in Invincible until it created a stain (which created a base that will last longer on a lip) and then used a lip pencil to outline the shape of Robbie's lips, focusing on keeping the edges sharp. "It's not a soft red lip," Dubroff says. She then used a lip brush to blend the pencil and liquid powder stain to create a smooth finish before applying the final touch — the lipstick.

"CHANEL Rouge Allure Velvet Extreme in Idéal is the perfect true blue red lipstick," she says. "The finish is really beautiful because it has a lot of pigment and it's very matte without it being too dry."

Anyone who has ever attempted to create a classic red lip knows that, while simple-looking, the process can actually be quite messy. Dubroff's hack? Equip yourself with tons of tiny cotton buds, plus micellar water and concealer. She cleaned up Robbie's edges with the water after each step before using a small brush to apply concealer around the lip to create those sharp lines.

If this sounds like a lot of work for an otherwise simple look, it is — but it guaranteed that Robbie's "je ne sais quoi" lip, as Dubroff calls it, would last for both the three-hour-long red carpet and three-hour-long awards show. "The foundation is there — it's not going to wear out in the middle. She can just apply the lipstick throughout the night," Dubroff says. Simple enough for a now iconic Oscars red carpet look.

More like this
The Best Beauty Looks Spotted At Paris Couture Week 2023
By Audrey Noble
15 Modernized '60s Makeup Looks & Hairstyles That Feel Wonderfully Retro
By Olivia Rose Rushing
J.Lo's Micro-French Manicure Has A Fun, Sparkly Twist
By Olivia Rose Rushing
11 Stunning Critics' Choice Awards Beauty Moments
By Audrey Noble
Get Even More From Bustle — Sign Up For The Newsletter
From hair trends to relationship advice, our daily newsletter has everything you need to sound like a person who’s on TikTok, even if you aren’t.