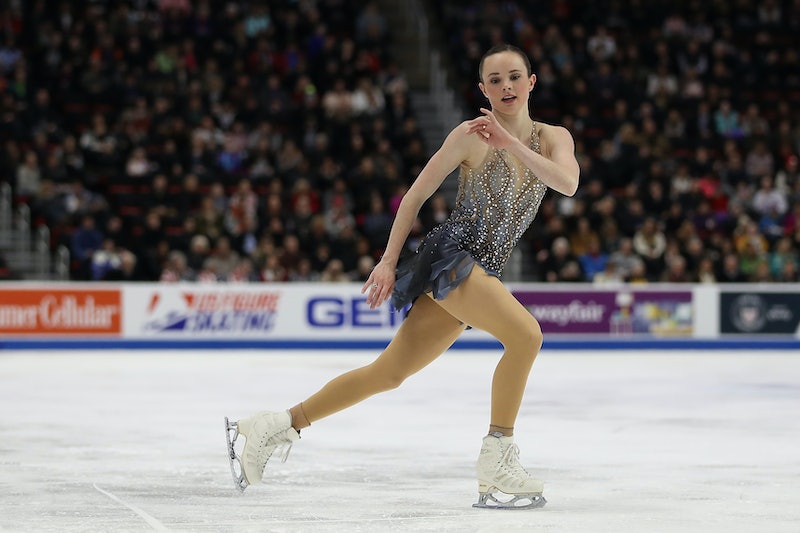 Roughly a week after being accused of intentionally slashing another competitor with her skate, U.S. figure skater Mariah Bell spoke out about the alleged incident, saying she meant "absolutely no harm." Bell was accused of purposefully kicking South Korea's Lim Eun-soo while at the World Figure Skating Championships.

"As I told Eunsoo (sic) in Japan, the incident at practice was very unfortunate and I meant absolutely no harm," E! News reported Bell wrote of the incident in a post on her Instagram account, which has since been made private. "Our training environment is professional and supportive, and I've never changed locker rooms or training times or anything like that."

The skater went on to say that she and her family and friends had been subjected to "hateful and disturbing" comments since the incident. Bell said she hoped the incident would cause people to think about how they communicate on social media. "The comments that my friends, family and I received on social media were hateful and disturbing and hopefully this situation raises awareness and causes people to think twice before hitting 'tweet' or 'post,'" E! News reported she wrote.

According to NBC News, the International Skating Union had previously said that although it had been notified of an incident between Bell and Lim, there was no evidence to suggest Bell had intended to intentionally cause Lim harm. "Based on the evidence at hand at this point in time, which includes a video, there is no evidence that Ms. Bell intended any harm to Ms. Lim," NBC News reported the union had said in a statement.

In a statement picked up from Yonhap News Agency by The Washington Post, a spokesperson from Lim's management agency, All That Sports, appeared to suggest that Bell had failed to apologize for making contact with Lim and injuring her leg. "Lim was slowly skating on the edge of the rink after completing her turn," The Washington Post reported an All That Sports official had told Yonhap News Agency. "Mariah Bell, who was scheduled to rehearse after Lim, suddenly kicked and stabbed Lim's calf with her skate blades. Mariah Bell didn't apologize to Lim Eun-Soo after the incident and instead continued to rehearse for her routine."

The management agency had also — without providing any evidence — told Yonhap News Agency that Bell had been "bullying" Lim "for months" and had even verbally attacked her prior to the world championships. According to People magazine, both skaters train under Rafael Arutunian in Lakewood, California. On Thursday, however, Bell denied allegations of bullying, calling her and Lim's training environment "professional and supportive."

The incident appears not to have deterred Bell from pursuing the 2022 Winter Olympics. "I learned a lot about my inner strength last week," E! News reported she shared on Instagram. "I'm excited to continue to train in the lead up to Beijing in 2022."