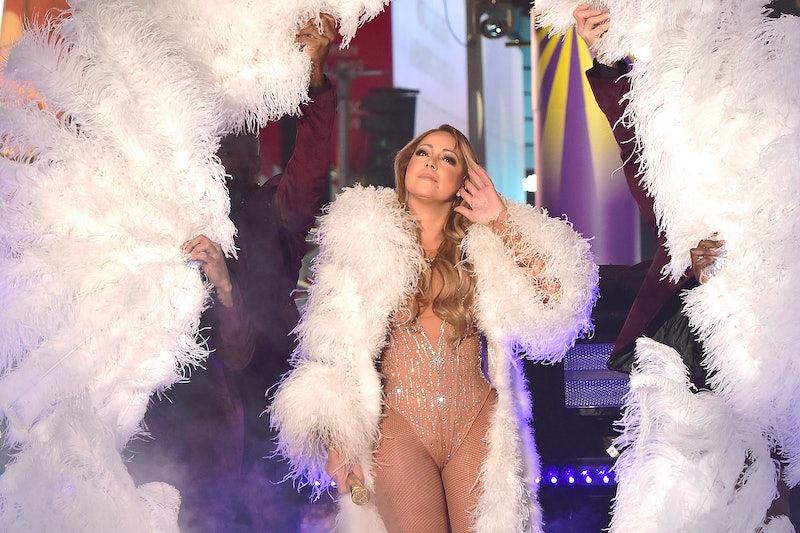 Over the weekend, Dick Clark’s New Year’s Rockin’ Eve with Ryan Seacrest heroine Mariah Carey hosted a release party in honor of "I Don't," her new smoke show of a breakup tune featuring YG. Sadly, the wedding gown from the music video (aka the music video's breakout star) couldn't be there to celebrate. In the final scene of the music video, a wedding gown — which reportedly was the actual dress Mimi planned to wear when she married ex-fiancé James Packer — is literally tossed onto an open flame and reduced to soot, never to be heard from again. Well, thanks to Entertainment Tonight, the dress was at the party in spirit. During the "I Don't" event, ET asked Carey about the flambéed wedding dress, and the response took my breath away.

So, what exactly prompted Queen Mimi set fire to the one-of-a-kind garment in the "I Don't" music video? What was the inspiration? Why'd she do it?

I mean, who can challenge that? Answer: No one. Literally no one. Sorry, Aristotle, but that line of reasoning is impenetrable. Mimi has presented us with an irrefutable justification for torching a wedding gown, and — Wait, what’s that? Mimi wants to add something? Well, by all means:

“There was a fire pit. There was a dress. Just throw it on the fire and burn it. What's the big deal?”

I... I love Mimi so much. Here I thought her original argument could not be better, but then she went and took it to a height I didn’t know existed. Why don’t we put it all together and drink the whole explanation:

"It was a moment. How could you not? There was a fire pit. There was a dress. Just throw it on the fire and burn it. What's the big deal?"