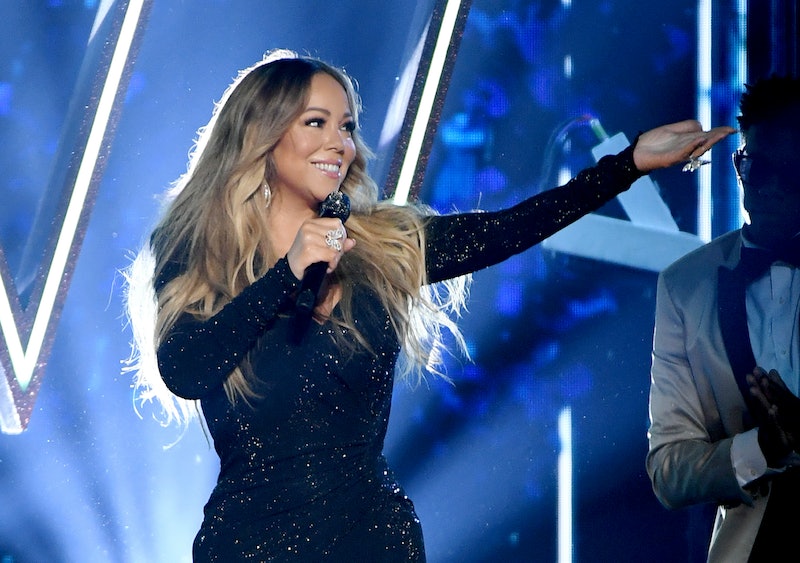 In an interview with Variety, a bit of unexpected news was revealed: Mariah Carey's memoir is coming in 2020. The singer told Variety that the as-yet-untitled book is something she is "obsessed with writing right now." Although it doesn't have an official release date — or, it seems, a publisher — as yet, the beloved diva says the book will be out in "2020 for sure, but not early 2020."

This year marks the 30th of Carey's music career, which has had its highs and lows. By lows, I mean Glitter, the 2001 film and accompanying soundtrack, both of which were panned by critics after their release and were delayed several times over the course of years. As reported by MTV at the time, Carey's publicist told media outlets that the singer had had a mental breakdown, for which she was receiving psychiatric care. Carey hints in her Variety interview that that may not have been the case, however.

"They’ve been worried — 'they' in quotes — about my image since 1901," Carey says, discussing the impact of her 2005 album, The Emancipation of Mimi, on her image. "That’s my way of saying a long time without stating an actual year. But no, since the beginning. And, like, I had to keep my hair a specific way, and I had to be very, very down the middle. I had a whole supposed breakdown, alleged. All of this to be revealed in the book, by the way, which I’m obsessed with writing right now. It’s so cathartic."

Carey elects to keep mum in the interview about the details of her career, saying she wants to leave a few surprises for readers. "[T]hey made billions of dollars off my incessant work," she tells Variety. "I did nothing but make albums. And I don’t want to give you more than you need because I want to save some for my book. I don’t know if you know what I’m talking about."