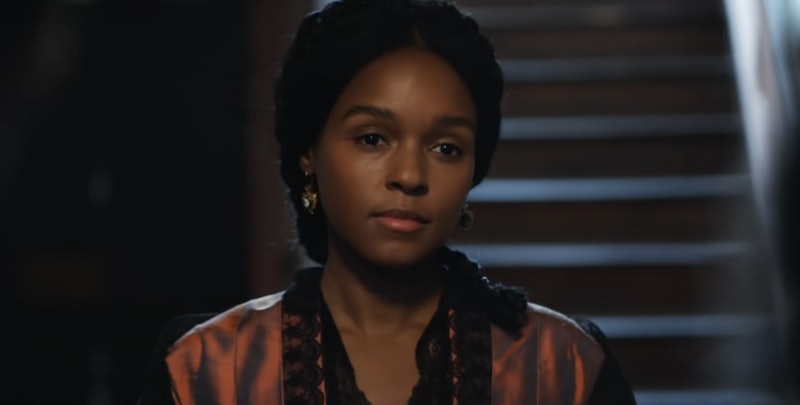 The average American probably knows the basics of Harriet Tubman's biography — at least, they'd better — but the new biopic, Harriet (out Nov. 1), gives audiences as a closer look at her life after she frees herself from slavery, including the people she meets after her escape. One of those characters is a woman named Marie Buchanon (Janelle Monáe), who Harriet gets to know when she arrives in Philadelphia after running away from her owners in Maryland. Marie owns the boarding house where Harriet lives at the start of her new life and is a living, breathing example of the possibilities now open to her. Monáe's character is also totally fictional.

Marie is a black woman who was born free. She's confident about her place in the world, wears elaborate ensembles with hoop skirts, and has a painting of herself hanging in in her own boarding house. There's a little tension between Harriet (Cynthia Erivo) and Marie at first, because Marie can't possibly understand Harriet's perspective on the world. But soon, they grow close. Marie helps Harriet adapt to freedom by getting her a job and helps her in her mission to go back and free other slaves by providing her with clothing, fake identification, and a gun. (Those who have seen the movie already know the full extent of Marie's support of Harriet.)

But while the boarding house owner plays an essential role in the movie, Marie Buchanon was not a real person. It seems that she was added to the Kasi Lemmons film to keep the story of Tubman's life in Philadelphia succinct. Of course, Tubman would have needed to stay somewhere and get clothing and food somehow. And, since she certainly met many people who assisted her, a character like Marie is a way to sum up Tubman's Philadelphia connections. (One of the places Tubman actually is said to have stayed in Philadelphia was a Quaker home called the Johnson House.)

By having Marie be a free woman, the film serves up a contrast to Harriet and shows just how divided the country was at that time. Crossing a state line is the difference between a black person being enslaved or owning their own business, which they can use to help others. In Philadelphia in particular, there was a large free black population, and due to its proximity to the slave states of Maryland and Delaware, it was common for black abolitionists to help escaped slaves.

Marie might not have been real, but the man who introduces the two women was. William Still (Leslie Odom Jr.), a free black man born to former slave parents, was a real abolitionist who was part of the Underground Railroad. As shown in the film, he took and kept extensive records of free slaves, and in 1872 he published a book titled The Underground Railroad Records. Still was only one of many abolitionists Tubman knew in her lifetime, but, like Marie, his presence helps frame her time in Philadelphia.

Harriet is a film that will leave viewers wanting to find out more about Tubman's long, heroic life, and while they won't find a Marie Buchanon in that history, there is still so much more to learn about her and the people who supported her cause.