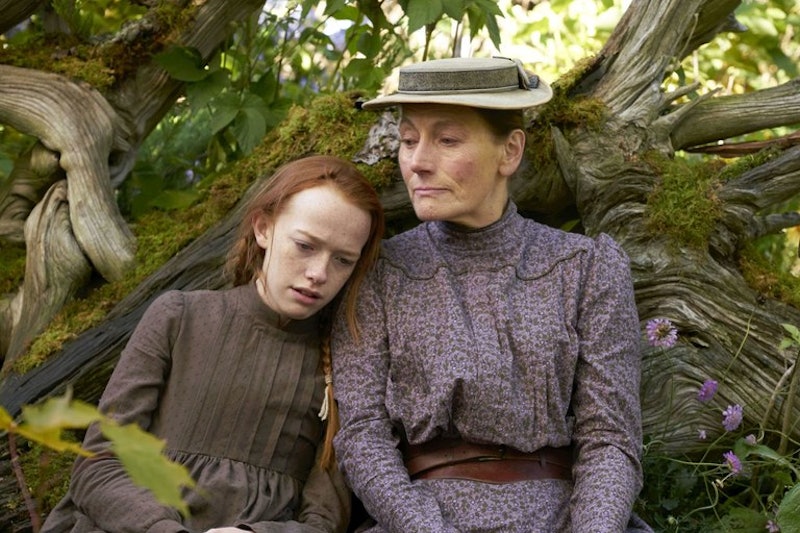 If you happened to be a book lover during the last century, or so, you know Anne of Green Gables. You’ve walked the great White Way of Delight with her, rowed across the Lake of Shining Waters, traipsed the Haunted Wood, considered the name ‘Cordelia’ for yourself. You’ve fallen in love with Matthew Cuthbert, found Mrs. Rachel Lynde a challenging personality, and developed a particular disdain for the Pye girls. And, if you’re anything like author Sarah McCoy, you’ve wondered about the mysteries of Marilla Cuthbert’s life as well — mysteries that McCoy’s brand new novel, Marilla Of Green Gables, seeks to answer.

"I wrote this novel with no grand ambition,” writes McCoy of her latest novel, out now. “Instead, I started with a cryptic un-telling — a mystery woven into Anne of Green Gables.” That mystery, arising just as Anne’s romance with the young Gilbert Blythe is still barely a twinkle in her teasing schoolmate’s eye, is what exactly happened between Marilla and Gilbert’s father, John Blythe, when they were just schoolmates themselves.

All that readers of L.M. Montgomery's classic work are offered is the inkling of unrequited love, the hint of a romance gone wrong. “John Blythe was a nice boy. We used to be real good friends, he and I. People called him my beau,” wrote Montgomery of Marilla, speaking to Anne in church. “Oh, Marilla,” Anne replies. “—and what happened?”

“Anne’s question echoed in my heart my whole life,” writes McCoy. “Oh, Marilla, what happened? This novel is my answer to that.”

What happened, of course, is a whole life — entire lives — in the history of Green Gables, long before Anne with an 'e' colored it with her carrots-red hair, insatiable imagination, and chatterbox ways. Anne might be the star of Green Gables — and she is — but that doesn’t mean Marilla is without a story of her own as well.

Marilla of Green Gables by Sarah McCoy, $27, Amazon or Indiebound

That story begins, in McCoy’s telling, in 1837, when Marilla is just 13-years-old. Green Gables is just a sea of fields, a barn, and a one-room cabin shared by the young Marilla, 21-year-old Matthew Cuthbert, and their parents Hugh and Clara. The Green Gables that readers know and love is still under construction, gable-less and yet unnamed. Marilla is a soft-spoken and thoughtful teen, in love with books and filled with Anne-like imaginings of her own — causing readers to wonder what transformed Marilla’s character, to consider how the whimsical and dreamy Anne might have grown up to be someone else entirely, had her own story taken a different turn.

“Sometimes, as sinful as she knew it was, Marilla wanted to idle the day away however she pleased,” McCoy writes, at the start of Marilla of Green Gables. “When she could steal time, she’d take to the balsam woods with her Godey’s magazine leaflets and follow the brook until it cascaded to a little pool split in half by a maple growing right up through the center. She’d sit there on her island with the water bubbling around and read until the sun slanted thinly through the trees.”

It’s a scene that L.M. Montgomery could have written herself — one that seems far more in line with the character of Anne Shirley than of Marilla Cuthbert. Readers will have no trouble picturing Anne holding such space — romancing nature, stealing away precious minutes of reading. But the Marilla that McCoy gives readers once had far more in common with Anne then anyone might have expected.

While the mystery McCoy seeks to resolve in Marilla of Green Gables is that of the unfulfilled romance between Marilla and John Blythe — and she does — the novel answers many of the other questions of Marilla’s life as well: the origins of her lifelong friendship with Rachel Lynde; her dedication to the Ladies' Aid Society; the true significance of her prized amethyst brooch; and all the small, seemingly insignificant moments that would become formative in later allowing a woman as life-hardened as Marilla to open her heart to an orphan like Anne Shirley. Because while the Marilla readers first meet in McCoy’s novel is a much softer, gentler, dreamier Marilla, she ultimately becomes that older character who had to muscle through her life, making peace with her fate.

In this way, perhaps, McCoy has written Marilla as the photographic negative of Anne — we see what might have become of that wild spirit, had she not ultimately found the love and security she so deeply craved. “They simply went on,” McCoy writes, of both Matthew and Marilla, “bringing in the cows from pasture, bedding down Jericho, feeding the chickens, sweeping the yard, putting supper on the table, reading the Bible before bed, praying in the darkness, sleeping and dreaming of things forgotten by sunrise.”

More like this
Jessica Simpson On The Time She Was Pursued By A Backstreet Boy & An *NSYNC Member
By The Editors
Netflix Shut Down 'Bridgerton' S3 Rumours About A “Very Dark” Storyline
By Bustle
We’ve Entered The Hot Boy Reader Era
By Samantha Leach
'That '90s Show' Star Callie Haverda Got Advice From Mila Kunis & Ashton Kutcher
By Brad Witter
Get Even More From Bustle — Sign Up For The Newsletter
From hair trends to relationship advice, our daily newsletter has everything you need to sound like a person who’s on TikTok, even if you aren’t.