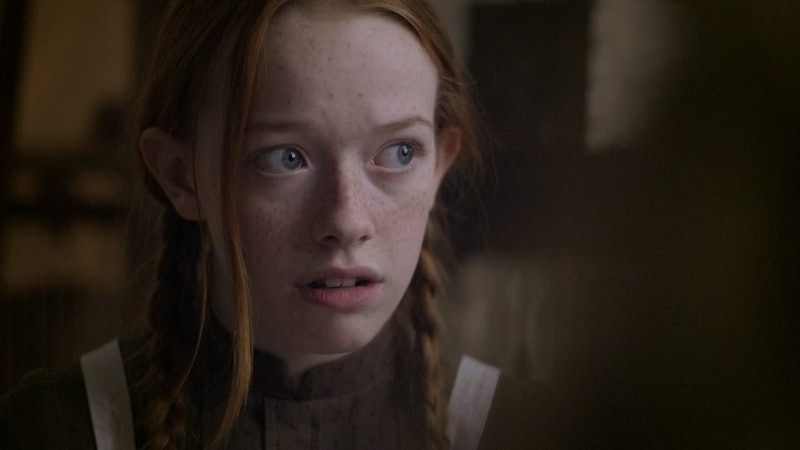 The second, modern adaptation of Canada's most famous novel hits Netflix on May 12, which means it's time to take a look at the similarities and differences between Netflix's Anne with an E and the Anne of Green Gables book series. The new series maximizes the gritty elements that were largely obscured by manners and prejudice in Lucy Maud Montgomery's 1908 novel, so fans looking for Anne Shirley's familiar whimsy may find that the new TV series isn't what they expected.

Anne with an E showrunner Moira Walley-Beckett's plans for the series recall the 1970s adaptation of Little House on the Prairie, which relied on characters and story arcs not present in Laura Ingalls Wilder's books. The first episode of Anne with an E covers the first quarter of Montgomery's novel, and Walley-Beckett wants a total of 35 episodes to finish exploring the first Anne of Green Gables book. Contrasted with Sullivan Entertainment's beloved 1985 miniseries, the preeminent Anne of Green Gables adaptation, which ran for just over three hours, Walley-Beckett's plan seems ambitious, at best.

To make Netflix's Anne of Green Gables TV series, showrunners have fleshed out asides in the novel, filmed previously untold backstories, and promoted background characters to major players. Walley-Beckett wants her show to be historically accurate — unlike the anachronistic Anne of Green Gables TV movie, which made its PBS debut on Thanksgiving Day 2016 — but whether or not it will be worth 35 hours of viewers' time remains to be seen.

Here are the biggest differences between Anne with an E and Anne of Green Gables.

1. Anne and Her Experience Are Quite Changed

Like the miniseries, Anne with an E ages the pre-teen book heroine into a 13-year-old. (Fifteen-year-old Amybeth McNulty is two years younger than Megan Follows was when she portrayed Anne Shirley in 1985.) However, Netflix's Anne, who goes by Anne Shirley Cuthbert, faces a lot more turmoil in her adolescence, and starting her period — something not touched upon in the Anne novels or other adaptations — is the least of her problems.

Fans know that, before she came to live with Matthew and Marilla Cuthbert, Anne stayed with the Hammonds, who took her in to help care for their eight children. Mr. and Mrs. Hammond are only mentioned in passing in the Montgomery novel, but the 1985 Anne of Green Gables miniseries spends a few fleeting minutes fleshing out the harsh Mrs. Hammond and her husband, who dies of a heart attack after Anne is late with his lunch. Anne with an E changes the circumstances of Mr. Hammond's heart attack, delivering his untimely death in the middle of a savage beating he unleashes on poor Anne.

Anne with an E's heroine relives this moment and others in flashbacks. Her experiences with the Hammonds have given her PTSD. The New York Times notes that "[c]rying babies cause her to recall Mrs. Hammond sneeringly describe [sic] her as a 'miserable piece of trash.'"

The cruelty directed at Anne does not end when she comes to Avonlea. Where her peers' bullying is tempered in the novel and miniseries by Anne's friendships with Diana Barry and Ruby Gillis, it rages full-force in Anne with an E. Josie Pye states emphatically, "I won't eat next to dirty trash," and a boy uses Anne's orphaned status as an excuse to call her a "talking dog."

By the time Gilbert Blythe makes his infamous "carrots" comment in Walley-Beckett's version, Anne has had enough. Her cheer-worthy slate-breaking episode isn't caused by her quick temper, but by the slow burn of abuse she has already suffered.

2. The Cuthberts' Hired Boy Has an Expanded Role

The only reason Anne winds up in Avonlea in the first place is due to a mixed-up orphan request. The Cuthberts want to adopt a young boy to help Matthew with the farm work, but their well-intended messenger picks them up a girl instead. Eventually, they adopt Anne and take on a French-Canadian hired boy instead.

Much like the Hammonds, Matthew's helper makes only the briefest appearance in the Anne of Green Gables novel: "Jerry Buote, the hired boy at Green Gables, said [Anne] talked all the time to herself or to the trees and flowers like a crazy girl." Anne with an E recasts him as the stoic Jerry Baynard, and elevates him to the position of Anne's partner in bickering. Their in-fighting stems largely from Anne's jealousy: Jerry is the boy the Cuthberts wanted, and she is a hanger-on.

3. We Might Find Out How Matthew and Marilla Ended Up Single

Readers know that Marilla Cuthbert once had a beau in Gilbert Blythe's father, John, but that a senseless quarrel ended their budding relationship for good. As for Matthew, he has always been too shy to speak to women, much less court them.

These familiar characterizations may very well change in Anne with an E, however. An early scene shows Matthew chasing down Anne's train on horseback, an act that's completely out of character for the mild-mannered man we meet in both Montgomery's novel and the 1985 miniseries. Walley-Beckett has "filmed new histories for Matthew and Marilla that explain how they wound up emotionally remote and unmarried," according to The New York Times, so it's possible that Marilla's relationship with John Blythe will be either eliminated or explored in more depth. Will Anne with an E uncover a secret childhood courtship between Matthew Cuthbert and Rachel Lynde? Only time will tell.

Anne with an E makes its U.S. premiere on Netflix May 12.

More like this
Idris Elba & Tom Hollander Lead This Year’s Must-Watch Christmas Flick
By Maxine Harrison
The 'Firefly Lane' Book Ending Teases Way More Tears To Come In 2023
By K.W. Colyard
'Bridgerton' S3 Teases Exciting Social Season For Penelope Featherington
By Bustle
Lib & Will’s Romance In 'The Wonder' Is Very Different From The Book
By Sam Ramsden
Get Even More From Bustle — Sign Up For The Newsletter