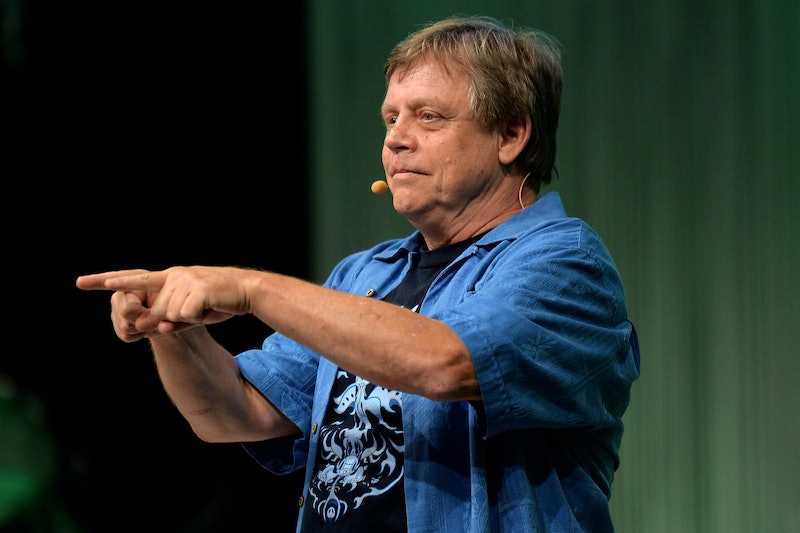 Prevent the spoilers, you must. In a new interview with Entertainment Weekly, beloved actor and proud Arianator Mark Hamill discussed Star Wars and spoilers and how the handling of scripts has changed since the 1970s. A long time ago, in a galaxy that is not far, far away, Star Wars script matters were quite chill. But in the year 2018, that could not be further from the case.

As Disney announced back in July, Hamill's Luke Skywalker will indeed be in Star Wars: Episode IX. Given what happened to the character at the end of Star Wars Episode VIII: The Last Jedi, there are many questions regarding Skywalker's involvement in the forthcoming movie. Is he going to be a Force Ghost or what?

Hamill cannot and will not say. As he explained to EW, Star Wars script security is on another level, especially compared to how things were when they made A New Hope. Just how lax was it back in the ‘70s, you ask? Well, for starters, Hamill recalled casually sharing the script for Episode IV with his buddies. He told EW that he gave it to his best friend, who then asked to let someone else see it, and not before long, “It went around to all my friends.” He wanted to hear their thoughts on the first movie in George Lucas’s space opera franchise, calling the screenplay the “goofiest thing” he’d ever read.

This is not the only time he's shared his initial reaction to the A New Hope screenplay. When talking to the Calgary Herald in 2017, Hamill recalled,

"I said, ‘[The A New Hope script] is the goofiest thing you’ve ever read. I can’t figure out how it’s going to turn out. Is it a parody? Is it straightforward? What?’ So I lent it to my best friend Jonathan and he read it and said, ‘Can I give it to so-and-so?’ and I said sure. She read it. Three or four people read it."

“Of course back then nobody cared,” he said in the aforementioned EW interview. “Nowadays it’s like working for some secret deep state government organization, like being in the CIA. They’re going to send rewrites over to Prague on this dark red paper that gives you a headache to read.”

That is not an exaggeration. Hamill told EW that while he films Knightfall in Prague, someone from the studio has to fly to Prague with the Episode IX rewrites, stick around while Hamill reads the rewrites, and then take the rewrites away. Like a Force Ghost, the Episode IX script will vanish into the ether. “You can’t even keep it overnight,” Hamill explained. “But that’s the way it is now.”

He did get to hold onto a script for The Last Jedi, but with great script power came great script responsibility. “I had to lock it up in a safe every night and then carry it with me and never let it out of my sight,” he recalled to the magazine. “And I can understand why — if [a script] gets out it ruins it for everyone.”