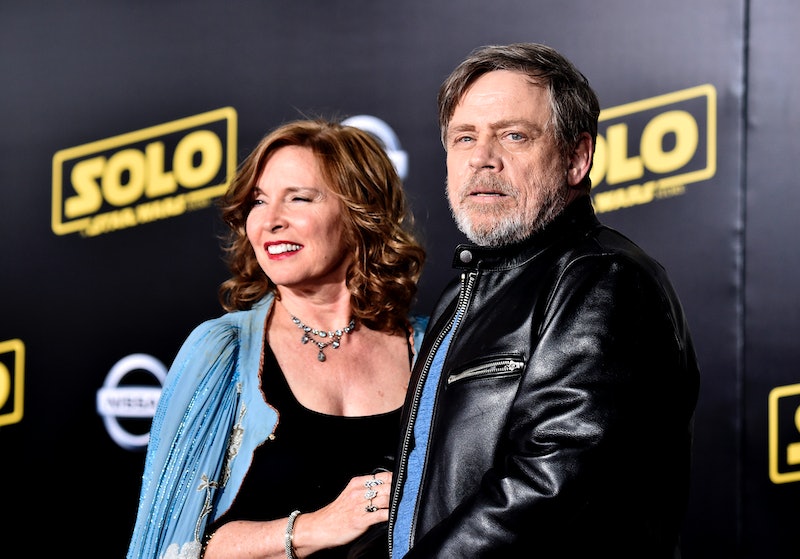 Star Wars fans know Mark Hamill for his iconic role as Luke Skywalker, but when it comes to his personal life, they might be a little fuzzy on the details. But as it turns out, the actor — who voices Chucky in the new movie Child's Play — is married. From everything he's shared, it seems like he couldn't be happier with his partner. In fact, Mark Hamill's wife, Marilou York, seems like his perfect match. And even though they have more than 40 years of marriage under their belt, it seems like they're just as in love as ever.

So, who is York? According to her LinkedIn page, she works as Chief Financial Officer of Amazing Invisible, which Heavy reported handles Hamill's business ventures. And although York doesn't live life quite as publicly as her husband has for most of his career, her Instagram account does give fans a few clues as to what she's all about.

When York isn't going on adventures with Hamill — like when they previewed Disneyland's Star Wars land, Galaxy's Edge, when it opened in May — she shares photos of her friends and her travels. And out of the just 33 posts on her account, many of them are photos of her dog, Millie. But since Millie is super adorable, it makes sense that York would want to show her off. Just look at this face:

And as for her relationship with Hamill, the way they met might not be something that would fly in 2019, being that it included a very inappropriate pick-up line, but it seemed to have worked for this couple. As Hamill told People in 1981, he and York met at a dentist's office where she was working as a dental hygienist, and he made a lewd comment that apparently piqued her interest.

"She came into the waiting room in jeans, white coat, breasts like melons, looking like a Vargas painting," Hamill said at the time. "I said, ‘They let you dress like that at work?’ She said, ‘Yeah. Next.’"

They went on a first date to see Annie Hall — Hamill told the magazine he was trying to figure out if she had a sense of humor early on — and they dated for awhile, but briefly broke up because he decided he wanted to explore his newfound fame as a single man. "I kept busy. I ran my own life," York told People. "But all the time I thought I was good for him, so I was hoping we’d get back together.”

They did get back together, and it's been love ever since. Together, York and Hamill have three children — Nathan, Griffin, and Chelsea, who are now 39, 36, and 30.

What will Hamill share when he and York hit 50 years? It's hard to say, but it seems like they'll definitely continue living happily ever after.