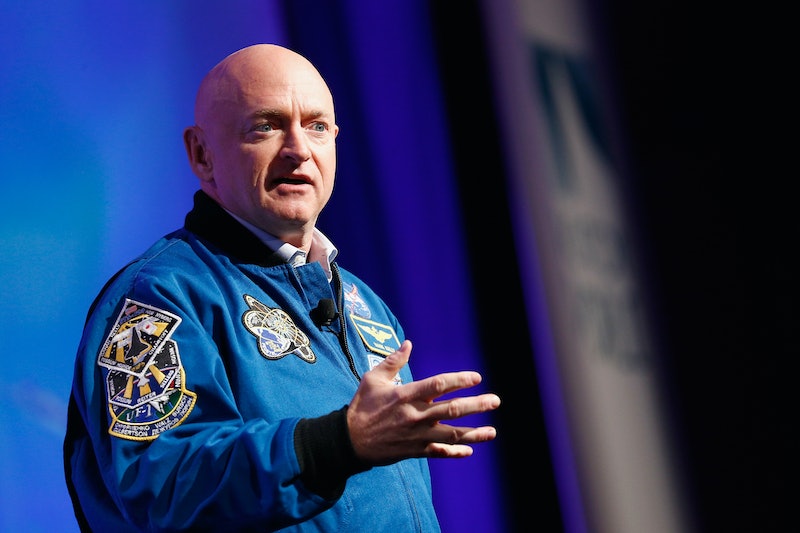 Along with being a Navy veteran, a retired astronaut, and a best-selling author, Mark Kelly is also known for his position as the husband of former Arizona Rep. Gabby Giffords, who survived a shooting in 2011. On Tuesday, Mark Kelly announced that he's running for Senate in Arizona, and his tearjerker of an announcement puts Giffords and her impact front and center.

The video tells the story of Kelly's life and talks about his experience in the military, in space, and as the son of a forward-thinking mother, who broke barriers to become a police officer in the 1970s. But the most moving part of the video shows Giffords and Kelly talking about Giffords' difficult rehabilitation process.

Kelly will be running for the seat currently held by Republican Sen. Martha McSally, who Arizona Gov. Doug Ducey appointed to serve in former Sen. John McCain's seat until 2020. McSally has long been known as a moderate Republican, as Vox wrote, and she lost her 2018 election to Democrat Kyrsten Sinema. While both Kelly and McSally were combat pilots, there's one issue they would certainly clash on if she runs in 2020: gun control.

Together, Giffords and Kelly founded the "GIFFORDS" organization for gun violence prevention in early 2013 after the tragic shooting in Sandy Hook, according to the bio on his campaign website. Since then, GIFFORDS has advocated for policies preventing gun violence at both the federal and state levels. McSally, on the other hand, has said she believes universal background checks to be unconstitutional, according to the grassroots PAC Represent Me AZ.

However, Kelly also expressed in his video that he would work to get beyond the current environment of partisanship and polarization in Washington.

"It becomes pretty obvious pretty early when you get into space that we're all in this together," Kelly said towards the beginning of his video, which opened with photographs from his time on the International Space Station.

Kelly's candidacy could potentially help Democrats take back the Senate in 2020, according to the BBC. Although he's running for office for the first time, he comes in with significant name recognition and connections — in addition to his inspiring personal story. Plus, McSally already lost to one Democratic Senate nominee.

Of course, Kelly will have to win the Democratic primary first, and so far it looks like he will likely have competition from Rep. Ruben Gallego, as NBC News wrote. This announcement video, however, shows that Kelly is serious about winning.