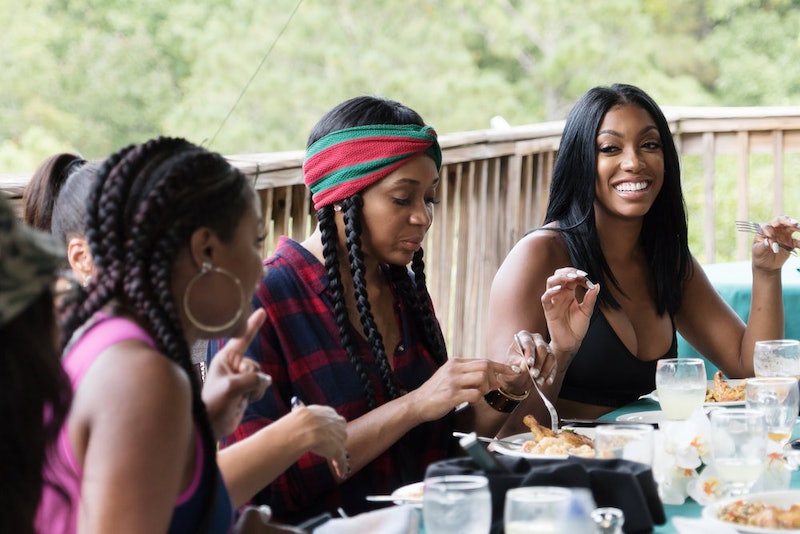 While Adele is saying "Hello" and Beyoncé gets everyone into "Formation" at the Grammys, meanwhile, the Real Housewives of Atlanta are having a dramatic night of their own. After taking a week off to watch their home city tragically lose the Super Bowl, it's time to check back in with the cast as the RHOA camping trip finally makes it out of the parking lot; however, the deja vu immediately kicks back in when the first few minutes are a direct rehash of everything that happened for the last several episodes. We alllll get it, Bravo: Marlo and Kenya's friendship is struggling, everyone wants to spread rumors about Kandi for some reason, and Porsha has been to anger management, OK?!

However, the trip finally starts cooking when a night around the campfire turns into an excuse to roast Kenya instead of marshmallows. At first, the shots are mostly fair, if a little extra — I mean, Kenya was rocking some wonky fake eyelashes that night, though they were probably knocked askew from having to put together the ladies' tents. But things go over the line when Marlo attacks Kenya for not having a relationship with her mom (something Shereeé already did, by the way). Most of the time, Kenya hasn't met a single part of her past that she's not willing to exploit for an episode, but her would-be reunion with her mom was the most vulnerable she's ever been on screen.

Somehow, this manages to work out in Marlo's favor, because Kenya winds up apologizing and asking Marlo to be her friend again! For maybe the first time ever, Kenya has a chance to really turn the screw with how much someone hurt her feelings, demand a complicated apology, and be cagey about granting it. She's pulled the same dozens of times before on Porsha, attempted to goad Phaedra into groveling in front of her, and even got play mad at Cynthia in the last episode in some weird roleplay about Matt. But Marlo gets forgiven, and the insults are forgotten. There's not much evidence so far that they're going to be best friends again, but for now, the Kenya and Marlo have declared a truce on RHOA.