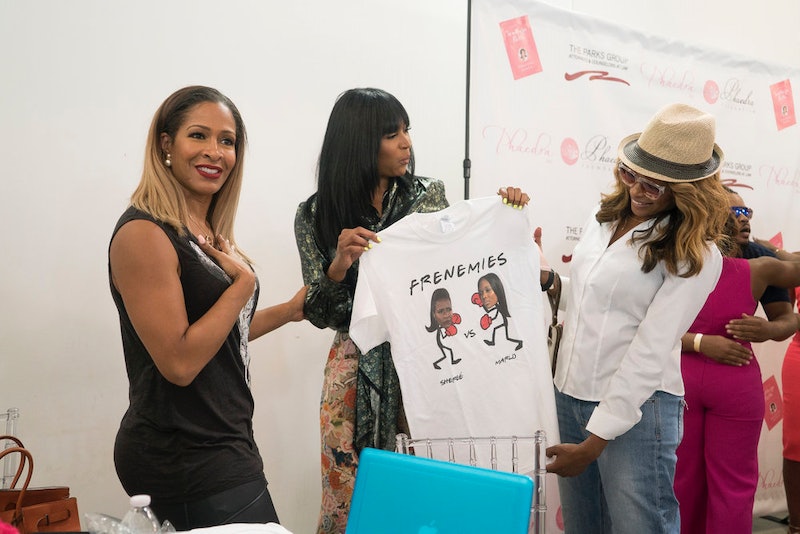 This season of Real Housewives of Atlanta is in desperate need of some guest appearances. And even though NeNe Leakes is still MIA, there's a guest spot just as good: Marlo returned to RHOA. She's a past cast member, a former pal of Kenya and current friend of Shereé. Last time Marlo appeared on the show, it was with Kenya at field day, as a way to get underneath NeNe's skin and sabatoge the event, whereas this time it was a way to start a little fight with Kenya. Shereé, meanwhile, was struggling in her ongoing feud a little bit, until her pulled the ultimate shady move by inviting her biggest enemy's biggest frenemy to Phaedra's charitable pop up shop.

Phaedra's charity event gets off to an adorable start when her son, Ayden, demonstrates his mom's instinct to make a dollar. And poor Cynthia gets the ol' "fade in and fade out" treatment when she calls to get some details. That's a passive-aggressive way to indicate that there's going to be some conflict between the ladies once the charity event starts. Marlo arrived spoiling for a fight over a missed invite to Kenya's birthday party, and while Kenya spotted the unexpected arrival and attempted to get in front of it, Marlo was able to get a little bit of hand-waving in, but Kenya quickly went back to her ostentatious booth and resumed her product hawking.

But the shadiest moment of all is, of course, credit to the Bravo producers. Marlo did her best, but the true punchline came in the final few seconds of the episode. After all of the backbiting and back-and-forth over how much each person would be donating, Kenya wound up contributing a paltry $450 (compared to even Shereeé's credited $595, the next lowest amount).

Of course, charity is charity. But considering Kenya went out of her way to show off with the biggest and best booth, a token donation would have seemed like a classy move (especially once Porsha contributed all one thousand of her earnings). Because at the end of the day, no one tops those caption writers when it comes to throwing down a thunderclap of drama.