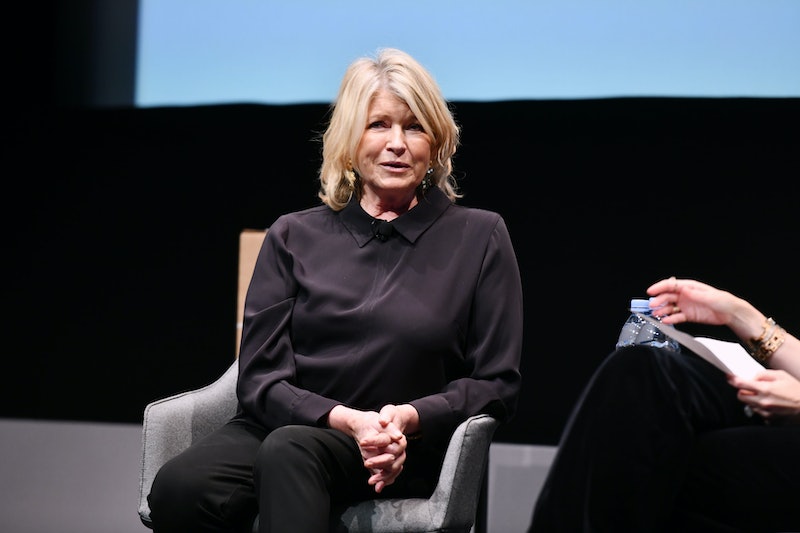 You might associate Martha Stewart with cookbooks and bedsheets than cannabis and CBD, but think again. CNBC reported that the latest person to cash in on the CBD craze is lifestyle maven Martha Stewart, who is launching a line of CBD pet products. She's reportedly partnering with Canadian cannabis grower Canopy Growth to assist in building the brand, which has not yet been named. In addition, according to a press release, the company will invest between $100 and $150 million in a hemp industrial park in New York State.

"I am delighted to establish this partnership with Canopy Growth and share with them the knowledge I have gained after years of experience in the subject of living. I’m especially looking forward to our first collaboration together, which will offer sensible products for people’s beloved pets," Stewart said in a press release about the launch.

Studies about the potential benefits of CBD are ongoing, but Harvard Medical School reported that it has been shown to help with some rare childhood epilepsy syndromes. Other studies have found CBD beneficial in reducing inflammation related to chronic pain. It's also been touted as a solution for anxiety and insomnia, with anecdotal evidence to back it up.

This is where CBD can be helpful for your four-legged friends. "CBD can be very safe to give to pets suffering from stress and anxiety, so long as the formulation and dosing is done by animal health professionals, and the products are tested for potency, pesticides, microbials, and solvents," Dr. Tim Shu, the founder and CEO of VETCBD, previously told Bustle. It's important to know that CBD oil is not a cure for any pet illnesses, and if your dog has pain or other symptoms of illness it's important to take them to the vet before starting a treatment plan.

It's worth noting that some criticisms of the "cannabis boom," as the explosion of CBD brands is being called, center around how the majority of people able to profit on this industry are white, while incarceration rates for nonviolent drug offenses disproportionately affect people of color. Stewart herself is formerly incarcerated after being found guilty of felony charges and serving five months in prison.

Stewart has previously spoken out about her stance on cannabis, saying in The Hollywood Reporter, "So someone smokes marijuana? Big deal! People smoke cigarettes and die from cancer. I haven't heard of anybody dying from cannabis. I'm quite egalitarian and liberal when it comes to stuff like that."

Since cannabis had been legalized in some states, and growing industrialized hemp is now legal, many people have wondered what will happen to those who have been incarcerated for cannabis-related offenses. In San Francisco, thousands of cases will be reviewed, which will hopefully set a precedent across the country.

"The San Francisco District Attorney’s Office will be reviewing, recalling and resentencing up to 4,940 felony marijuana convictions and dismissing and sealing 3,038 misdemeanors which were sentenced prior to the initiative’s passage," the office announced in a press release. "This will not require any action be taken by those who are eligible pursuant to Proposition 64."

You'll have to wait a little bit for Stewart's pet line to hit the market, but there are plenty of other CBD pet products already available. I use a CBD tincture from Medterra, CBD treats from FOMO Bones, and I've heard great things about Mary’s Whole Pets. You can also head over to the American Veterinarian website to see recommendations for CBD pet products.

More like this
The Real Reason Your Instagram Story Viewers Show Up In That Order
By Emma Carey
Why TikTok Is Obsessed With Caesar Salads Right Now
By Alexis Morillo
Behind The Hilarity Of The "POV: You Walk Into My Room" TikTok Trend
By Lexi Inks
TikTok's Butter Board Might Be The New Cheese Plate
By Emma Carey
Get Even More From Bustle — Sign Up For The Newsletter