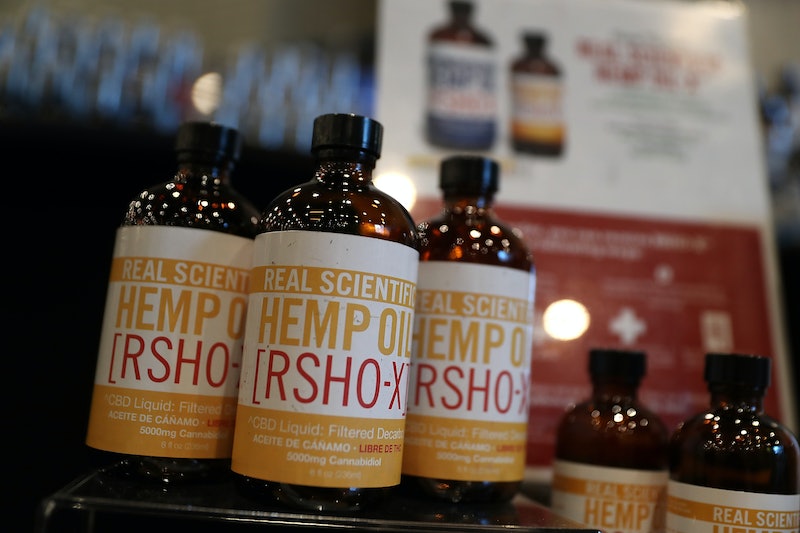 More and more, eco-conscious millennials are turning to all-natural options for everything from makeup, to cleaning products, to relief from aches and pains. The latest all-natural option to hit the scene is hemp, which has tons of health and wellness benefits, and is currently getting a lot of attention for its healing properties. I've become pretty careful about the products I use over the last few years because I'm sensitive to a lot of chemicals, so for me, hemp products are great alternative. Hemp is becoming more and more known for its health and wellness properties, moving away from its once hippie-ish reputation to mainstream markets like Whole Foods.

While not a cure-all, hemp-based products are known to offer relief for myriad medical conditions. As far as products I use on, or put in, my body, if I can't pronounce it, or if it's tested on animals, it's not my jam — so news that I can add another all-natural product to my regimen is pretty exciting. Reasons hemp is all the rage include its reported ability to reduce anxiety, sooth aches, manage chronic pain, relieve PMS symptoms, moisturize skin, and more — all without the worry of exposing yourself to toxic chemicals. Sounds like a dream, right?

"In combating anxiety and depression cannabinoids play a significant role. These substances act as signaling agents, causing improved communication between neurons," Dr. Cass Ingram, author of more than 20 books on natural healing, explains in an email to Bustle. "The anti-anxiety and antidepressant action of cannabinoids are related to enhanced neurotransmission as a result of their direct actions on neurotransmitter metabolism, including the induction of an increase in the synthesis of serotonin."

One such cannabinoid is CBD, a natural, non-psychoactive concentrate extracted from hemp that's been touted as a treatment for chronic paint to anxiety. But, does it actually work? And what are the actual health benefits of hemp?

First Thing's First: Hemp Does Not Get You High

When you hear the word "hemp," you might conjure up visions of squatting in a dark basement, or dorm room, smoking out of a homemade bong. While you're not alone, that association is actually pretty far off the mark, and this school of thought is one of the reasons hemp is so misunderstood. Hemp is actually marijuana's less psychoactive sister, and it's only 0.3 percent THC — the active ingredient that produces the "high" feeling.

Marijuana, on the other hand contains anywhere from 5-20 percent THC. Additionally, hemp has a higher concentration of CBD (named for its chief chemical compound, cannabidiol), which actually reduces feelings of being high. And, since the two plants are used for different things, they are grown and cultivated differently as well.

"Put simply, while marijuana and hemp are both plants of the same species, Cannabis Sativa L., hemp is different in that it contains only minute levels of the cannabinoid THC, which is the one that produces a psychoactive effect. Marijuana is high in THC, while hemp is high in non-psychoactive compounds like CBD," Heather Jackson, the CEO of cannabinoid research nonprofit Realm of Caring told Liz Moody, senior food editor for Mindy Body Green. "Hemp and CBD are also legal federally, while marijuana is legal only in certain states."

I will admit that when my brother suggested I try hemp oil for my anxiety, I was understandably reluctant because in my experience, marijuana induced anxiety, not reduced it, and I wasn't aware that it was actually two different plants. Despite my experience, studies have shown that CBD may be useful in reducing anxiety and paranoia, and may even be useful in treating seizures, though not enough studies on cannabidiol have been completed to say conclusively that this is true. However, enough people seem to anecdotally support the benefits of CBD oil to make it a break-out product in the health and wellness industry during the last two years.

The Quick & Dirty On The Hemp Boom

The hemp business is booming in Canada, in large part because of the demand for hemp seed oil in the U.S. Individual states are currently proposing and passing laws to grow hemp, which was banned in 1937 when U.S. drug laws made cultivating it illegal. A provision in the 2014 farm bill removed hemp grown for research purposes from the Controlled Substances Act, which allowed hemp to be grown in the U.S. for research purposes.

While it is legal to eat hemp seeds and use hemp-based products, in the U.S., the road to making the hemp crops local is ongoing. Most recently, Hemp Industries Association (HIA) filed a motion against the DEA on Feb. 6, 2017, holding the agency in contempt of court for disregarding the Feb. 6, 2004, ruling that hemp stalk, fiber, sterilized seed, and seed oil are not classified as Schedule I controlled substances. So, for now, the hemp you're using was probably grown somewhere else. That being said, plenty of hemp products are still available in the U.S. Hemp oil is widely available as a liquid, or a paste, and Dr. Ingram agreed that it's beneficial for pain relief.

"Through their direct action on immune cells cannabinoids, especially the cannabis terpenes, help reduce and/or modulate the inflammatory response," Dr. Ingram explains. "This is through influencing and modifying the production of pro-inflammation mediators. Essentially, cannabinoids put into balance immune function, causing a reduction in immune-mediated pain and inflammation."

Hemp can be eaten as food, applied as a pain salve, used to make clothing and other products, and taken orally as a liquid. And, there is little debate about whether or not eating hemp is beneficial to your health: The answer is overwhelmingly yes. Seeds can be eaten on a salad, or as part of a smoothie, and hemp oil can be used to make salad dressing.

"With a nutty taste, hemp seeds are rich in protein, omega-3 and omega-6 fatty acids, with magnesium, fiber, iron, zinc, and phosphorous," Monica Watrous wrote for Food Business News. "Hemp has all nine essential amino acids, twice as much protein and 70 percent more iron than a 30-gram serving of chia or flax seeds."

For those with a gluten intolerance, hemp can act as a substitute for breadcrumbs to coat fish or chicken. If you have a nut allergy, hemp has a nutty taste and can be added to dishes that call for that flavor. Hemp seeds, oils, and powders are available at Whole Foods, and other natural food stores. But eating it isn't the only way to get its benefits. Personally, I think hemp salves, often mixed with other essential oils, are a great way to get started. And while CBD oil didn't reduce my chronic pain or anxiety, the salves have worked better than anything else I have tried for chronic pain — and I have tried everything.

I use Humbled Extracts pain-relieving salves and CBD Medic for my chronic neck and back pain. It's perfectly legal, and it won't leave you smelling like a medicine cabinet (or a college dorm). You can also try Mary's Nutritionals Mary’s Muscle Freeze, which combines hemp and natural plant extracts for a soothing, cooling effect. There's also Elixinol CBD Hemp Balm, which can also be used as a total body skin moisturizer. Additionally, I use Hempz lotions because they're all natural, paraben-free, gluten-free, and vegan. While they don't have pain-relieving properties, they're socially conscious and they make your skin crazy soft and supple.

While the hemp industry in the U.S. is continually evolving, you can try out many hemp based products and foods right now. Because everyone is different, what works to relieve one person's pain or anxiety might not work for another person. According to news website My Twin Tiers, some are calling hemp the new kale for it's superfood properties, and not that long ago kale was nothing more than a garnish. So, if you're looking to add healthy nutrients to your diet, and commit to all-natural, cruelty free products, there is literally no downside to hemp.