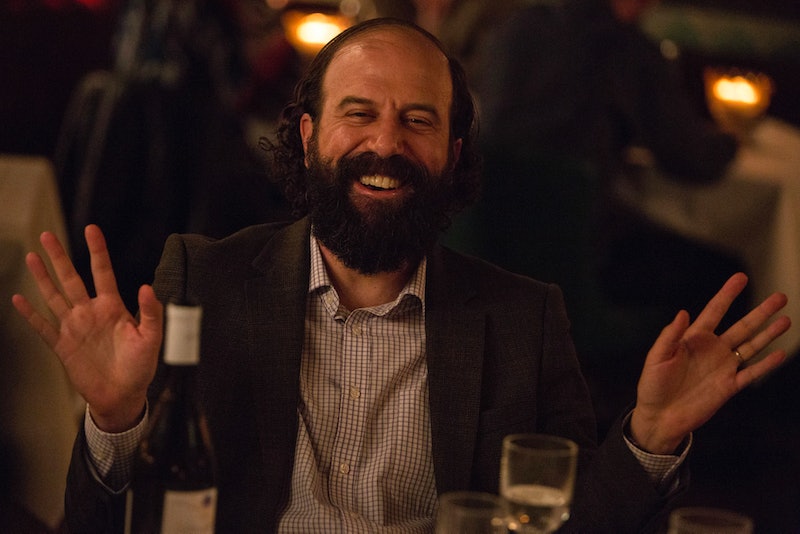 As someone who has managed to master watching multiple TV shows at once, it's such a surreal experience to be watching an actor in one show only to see them pop up in a random episode of another. While there are plenty of actors who manage to consistently traverse the TV-sphere, I seem to be experiencing this phenomenon most frequently at the moment with Brett Gelman. One minute I'm watching Fleabag, the next I see him in Stranger Things, and then suddently he appears in Fresh Off The Boat. So, who is Fleabag's Brett Gelman, and how has he managed get so many stellar shows on his CV?

Raised in a suburb called Highland Park in Chicago, 42-year-old Gelman knew he wanted to go down the comedy route at the age of six after watching A Night At The Opera by the Marx Brothers, as he told culture site Gothamist in 2007. The actor studied at the University of North Carolina School of Arts and went on to take classes at the Upright Citizens Brigade Theatre (UCB) in New York. Described by the New York Times as the "de facto clubhouse for the city's vibrant alternative comedy scene," the likes of Will Farrell, Tina Fay, and Amy Poehler also found their start at the prestigious UCB.

Gelman was also a pretty prominent face on Adult Swim for a few years, where he appeared in Eagleheart and Brett Gelman's Dinner in America. That all changed in 2016, however, when Gelman decided leave the network "citing the lack of action on the gender gap and the 'misogyny of their policies' as his two reasons," as entertainment site A.V. Club reported at the time.

The actor has been playing minor and supporting roles in a lot of shows that you've most probably come across over the past few years — think The Office, Mad Men, Love, Twin Peaks: The Return, Californication, and Curb Your Enthusiasm (to name a few).

And while Gelman has a knack for playing characters that are unlikeable and somewhat strange, he's played a whole range of roles, that's for sure. I mean, you've only got to look at his performance on Stranger Things as the eclectic conspiracy theorist Murray Bauman in comparison to his portrayal on Fleabag as the alcoholic brother-in-law Martin to see just how far this man can stretch his skills. And Gelman manages to somehow add a surreal comedic edge that gives his characters even more depth. "A lot of times, comedic actors are discriminated against," he told Indie Wire during the promotion of Twin Peaks in 2017. "People just assume they can't do something other than what they do, rather than thinking, oh wait — doing what they normally do is really hard."

While there haven't been any official announcements about what Gelman has in the pipeline, don't worry. If you can't get enough of this actor and his surreal humour, you're more than likely to see him pop up in whatever show is next on your watchlist.