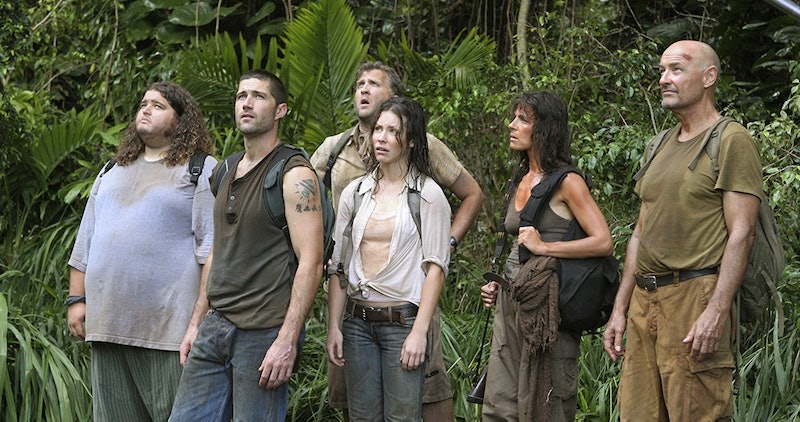 The Marvel Cinematic Universe is one of the most successful franchises of all time, and as a result, much has been written about its influence on the film industry. But what many people forget is that the MCU itself is heavily influenced by not only other movies, but the television shows that came before it. After all, the MCU functions much like a TV show, in that audiences have been paying to see the next episode for a decade straight. And the television show with the most evident influence on the franchise is ABC's Lost. That's right, the MCU and Lost have much more in common than just Evangeline Lilly — they're actually intricately connected.

Lost’s six seasons spanned 2004 through 2010, during which time it was deemed one of the most ambitious and expensive shows in the history of television. The two-part pilot episode cost somewhere between $10 - $14 million alone, E! reports, but it was worth such cost since over 18 million viewers tuned in to watch. And they kept watching, spending years following the lives of a group of strangers who found themselves stranded on a deserted island among the wreckage of a commercial airline. Over the course of its seasons, Lost went in many different directions, with smoke monsters, flash sideways, and those significant numbers, but while the show may seem divorced from the smoke monster-free MCU, there actually several ways in which this television series influenced one of the most successful film franchises of all time.

If one views each phase of the MCU as, say, a season of television, with the Avengers films acting as the season finales, the pattern and its relation to Lost becomes clear. In the MCU, there are standalone films, which introduce characters and their backstories. These movies develop singular characters while building towards ensemble films, à la a season finale of sorts. And, if you were to replace the word “film” with “episode” in the previous two sentences, they would describe the exact narrative structure of Lost, wherein characters are developed in their singular episodes, building towards ensemble-focused finales.

For example, Season 1’s sixth episode revealed details in the marriage between Sun and Jin, the seventh episode explained how Charlie got hooked on heroin, and the eighth episode introduced Sawyer’s con man backstory. By Lost's Season 1 finale, all the key players were so firmly established that the episode was able to operate like a more traditional ensemble rather than focus one singular characters.

The MCU's narrative structure executes this in a slightly different manner, as heroes generally get their standalone films (Thor, Captain America, Iron Man, etc) before being introduced to the ensemble movies; Lost manipulated each episode to operate like a standalone in the throes of the group. Still, both properties were aware that the inclusion of such large casts mandated singular development for the most important characters, which in turn raised the stakes for the survival of the group in the ensemble films and episodes.

Perhaps the most obvious television trope adapted by the MCU, to varying degrees of success, is the will-they-won’t-they relationship. This trope isn’t singular to Lost — though, the show did make great use of it — but it’s a popular tradition of TV not often seen in films, which largely end with the status of the romance resolved. However, the MCU’s awareness that certain characters will reappear in later films allows the studio to meander in building romances with much flirtation and little catharsis.

On Lost, the romantic relationships were often somewhat in the forefront, as the show wove elements of sci-fi and melodrama together in a surprising, but ultimately satisfying way. There was, of course, Jack and Kate, who had a “meet cute” in the pilot episode when Kate stitched up Jack’s back, only to flirt with the idea of committing to one another through the series. Charlie, who struggled with his heroin addiction, and pregnant Claire were another pair that flirted throughout the show while facing obstacles that kept them apart. Lost was a show that took much patience with building their will-they-won't-they relationships, which only made fans even more invested in these couples.

In terms of the MCU’s will-they-won’t-they couples, Peter Quill and Gamora flirt throughout their standalone films, only to finally have their big, romantic moment in Avengers: Infinity War. Peter even comments on their "unspoken thing," comparing it to Cheers’ Sam and Diane — a couple some credited with giving birth to the will-they-won’t-they TV trope. Meanwhile, Tony Stark and Pepper Potts enjoy a will-they-won’t-they romance, as while the status of their relationship may be confusing at any given moment, they are irrevocably attached to one another and clearly endgame.

However, the MCU’s use of establishing romances through flirtation that extends several films isn’t always successful. In particular, the relationship between Bruce Banner and Natasha Romanoff is overstated in some films, yet disregarded in others. This development might've worked on TV, a medium with the liberty to air a plot-focused episode followed by a romance-heavy episode, but feature films don't have week-by-week liberties to take, and the will-they-won't-they romances work best when they are doled out steadily.

As such, despite successes like Peter and Gamora, the will-they-won’t-they trope is simply better on TV. Two characters exchanging longing glances every Thursday night on your television in your living room creates an intimacy and propels audience members to become emotionally invested in them being together. The same type of longing glances being exchanged every couple years on big screens in movie theaters, though? Not the same.

The Guardians Are Pretty Much "The Others"

In comparing the MCU to Lost, it’s noteworthy that Guardians of the Galaxy premiered during Phase Two and Lost introduced “The Others” in Season 2. In both cases, the main characters had been established enough for focus to shift to newer characters, all in an effort to keep narratives from growing stale and predictable. In contrast to the will-they-won’t-they trope, this element actually worked better in film than it did on TV. But again, this is to do with the intimacy of the latter platform.

TV viewership is based on a tradition of inviting characters into one’s living room; audiences come back based on the promise that they’ll see the characters to whom they’ve grown attached. The introduction of The Others on Lost betrayed this promise, leaving some audience members frustrated by the narrative shift. Films audiences, however, are accustomed to seeing new characters almost every time they go to the movies, thus making for a smoother introduction to Peter, Gamora, and the rest of the Guardians crew.

Lost featured both flashbacks and “flash sideways,” a narrative technique meant to tell two timelines at once, two different versions of events existing in tandem. But Lost's time travel didn't stop with that. There was also the time when Desmond’s consciousness time traveled from 2004 back to 1996. Oh, and the DHARMA Initiative sent a transmission 30 years into the future. Overall, Lost was interested in pushing the narrative constructs of timelines, and so, too, is the MCU.

The MCU has had its own fun playing with the concept of time. The most obvious example is the Time Stone, which gives the owner the ability to control time. In Doctor Strange, Strange uses it to reverse time and put time on a loop, eventually defeating the antagonist through this manipulation of time. In Avengers: Infinity War, Thanos turns back time to retrieve the Mind Stone.

The use of the Time Stone is more on the mystical side, but the MCU dabbles in time travel in other films that more closely resembles the sci-fi time travel of Lost. For example, Ant-Man and the Wasp was a movie more concerned with a scientific explanation of time travel. It introduced the Quantum Realm, a place where time and space aren't relevant, which is accessible through subatomic shrinking. While it’s unclear how this will affect the rest of the MCU, many have theorized that the Quantum Realm may be used to stop Thanos, which brings up the next point…

This is not to say that Lost is the singular show that created fan theories, as fans have been theorizing about their favorite books/shows/films for decades. However, one cannot deny the fact that Lost pushed theorizing to mainstream territory. This is due, in part, to the fact that the show's narrative was rarely closed in an episode-to-episode basis. The series' mysteries spanned episodes, even seasons, which prompted fans to speculate and theorize about what would happen. But Lost also coincided with a time in which culture was changing. The show ran from 2004-2010, during which time online journalism was in its infancy. As such, Lost was one of the first shows with mass appeal that experienced digital coverage, helping spread fan theories further than ever before.

The effects of Lost's digital coverage can be seen in the coverage of the MCU. Following a movie's release, audience members can Google for Easter eggs they missed, call backs to earlier installments, and fan theories as to how each film will affect the reason of the universe.

Of course, these aren’t the only two properties that have spawned fan theories galore (hello, Stranger Things), but there is an innate part of both the Lost and MCU fanbases that are hungry for theories. And this hunger can be seen as a side effect of the narrative structure of both worlds, in which the singular episodes/films build towards something larger. When everything is building towards something, fans understandably want to figure it out ahead of time, and they try to do so by ascribing meaning to everything.

At their cores, it’s the narrative structures of the MCU and Lost that make the two so very similar. Both overwhelmingly ambitious for their respective mediums, the MCU and Lost capitalized on similar narrative blueprints, which allowed them to execute their individual aspirations in building specific worlds in which a large cast of characters exist. This is, of course, not to claim that the MCU stole Lost’s design, but rather to appreciate Lost’s ongoing influence across the entertainment industry. Die-hard fans of the show don’t have to go back to the island, because the series' influence is ingrained in so much of today’s entertainment, including one majorly successful film franchise.