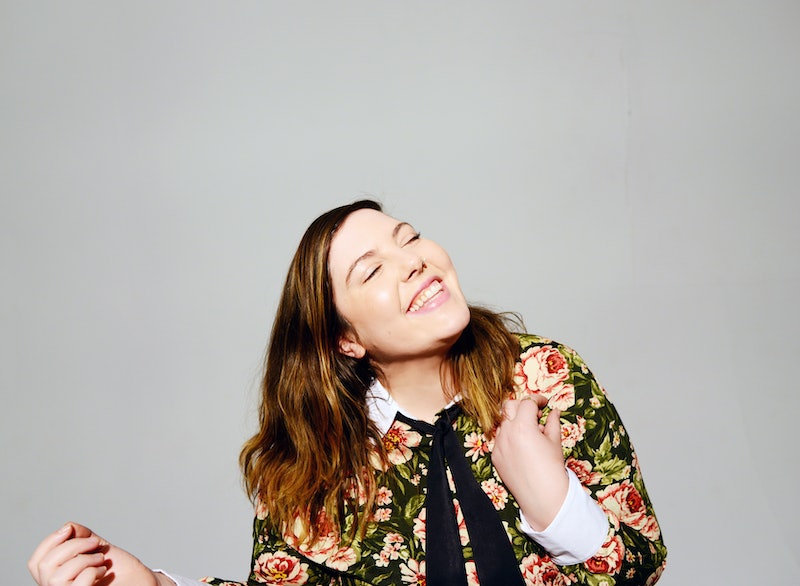 The ball is always in Mary Lambert's court — that's what happens when you make your own rules. As a singer, song-writer, and spoken-word poet who's absolutely "bursting with identity," Lambert doesn't shy away from speaking the truth just to make a pop song. That's why she doesn't have a label. Lambert lives life on her own terms, and her music and poetry are hypnotic, heart-wrenching reflections of that.

From the moment she began writing music as a child, Lambert's creations have primarily been for her — to help her process and overcome the more difficult hurdles life has thrown her way. In time, though, her music and poetry have become some of the most powerful anthems for those living similar experiences — whether with mental health, trauma, insecurities, sexuality, or size — assuring listeners that, in times of feeling painfully isolated, there is community. There is connection.

As part of Bustle's September Rule Breaker issue, Lambert spoke with Elite Daily's Style Editor Theresa Massony to discuss her upcoming album, the difficult yet necessary themes her music addresses, the need for endless self-interrogation, and how she plans to obliterate any notion that fat can't be synonymous with sexy.

Theresa Massony: What inspired you to start writing music?

Mary Lambert: My mom's a singer/songwriter, and so I grew up hearing my mom write songs, and kind of spin her turmoil into something productive and beautiful, and channel heartbreak and pain. She was in a series of abusive relationships, and as you can imagine that was sort of a tumultuous upbringing. To witness someone's ability to transform grief and pain into a song just really encouraged that sort of approach for me, so songwriting became a form of survival, pretty early on.

ML: Generally, I'll sit at the piano for about 15 minutes, and I'll let my hands do what they want to do. I would say probably 75 percent of the songs I write are really just for me, and for processing difficult things. I always say that writing sad songs, and processing grief in that way really affords me the ability to live a full joyful life, and if I didn't have that opportunity or that skill to express turmoil in that way I feel like I would be a very different, unhappy person.

TM: What are some of your favorite songs that you've written?

ML: I think as a quintessential artist I'm always most excited about what I'm working on right now. My next album I'm really, really proud of. I'm really excited about, it's really devastatingly heart-wrenching.

TM: I love that, that's my favorite kind of music.

ML: You're in for a treat. You're in for a real mental fuckery. There are a few songs on the album that I wrote just kind of in one of those divine connectedness to my heart and my relationship to the world that I'm really proud of.

This album is a sort of a concept album. I'd write a song, and then I would compose a string quartet reiterating some of those melodic ideas that lead you out of the song into a spoken word piece, sometimes about that same topic. These are topics of sexual violence, and mental illness, and breakups, and love, and childhood abuse, and then hopefully resilience, and hope.

I think most people can count on one hand the number of fat pop singers they know.

ML: I've always been that way. I'm such a loudmouth. I can't help it. I think I'm just bursting with identity. I don't know any other way.

TM: What are some aspects of your personal experience as a queer person, and as a plus-sized person, that people don't often realize that you have to deal with, but that you wish people talked about more?

ML: I think most people can count on one hand the number of fat pop singers they know. That's me, Lizzo, and Adele ... and I think there's a lot more insidious undertones within the industry that people don't realize are happening all at once.

Something that I really battled with was the idea that in order to be a good fat person, it's important to always be presentable, and it's important to always have makeup on, and it's important to be feminine. I always felt that the only way that I could be feminine is if I was petite, and could just fit in somebody's pocket. You know? There's really not a lot of room for someone my size to be considered in that way, or to be sexy. I mean, I just feel like in general, the basic thing people say is that fat people can be beautiful, but fat people aren't sexy. I really feel like it's one of my missions to just obliterate that.

TM: Have you ever found that people kind of criticize you for the amount of emotional songs that you write?

ML: Oh, 100 percent. I think when I was on a major label I got that so much. I was really told to not perform “Body Love” as frequently as I did, to not be as political as I was, or as I wanted to be, to refrain from talking about rape in my songs, or my writing. There's a desire for artists to be digestible in the industry, because it's easily marketable, so I understood it from a marketing standpoint of, “OK, we can market you as this sort of queer fat Taylor Swift, okay, we can do this, okay, but don't talk about rape, God. Don't talk about mental illness."

TM: Growing up, who were some kind of major sources of inspiration to you? Who helped you continue to accept your identity, and start to urge others to accept theirs, as well?

ML: I feel like it's going to be such a clichéd answer, but my mom, really ... But in terms of artists, I really loved Jewel. I knew she had sort of a tumultuous upbringing, as well, and channeled her heartaches into song, and she had such a strange, beautiful, unique voice, and it made me feel like maybe people might like what I do, as well. I loved her. I really loved the Dixie Chicks. Their political stance, and what they did was so fucking radical at the time. I don't think they got enough respect for what they did.

TM: For a lot of people it's not an easy process, but I'd love to know what were some of the biggest things, or biggest hurdles you had to jump over within yourself to accept and love your body the way it is?

If you would have told me six years ago that I'd be wearing crop tops I would have punched you in the face.

ML: When I was 19, I went over to my friend Shawn's house, and they had a magnet on the fridge that said, “riots not diets,” and it fucking blew my mind. It stayed with me — I have it on my computer, I have it on a tote bag. I think just the idea of not dieting blew my mind.

That’s when I wrote “Body Love,” when I was about 19. I performed that song every night for so many years, I performed it thousands of times, now, and every time I need it. Every time that I'm not just performing it for the audience it's become a mantra for myself. A reminder to not be self-destructive, or a reminder to extend kindness to myself.

If you would have told me six years ago that I'd be wearing crop tops I would have punched you in the face. I had this moment last year, I think I posted it on social media, where I bought this crop top online, and I put it on, and I immediately realized that you could see my back fat.Then I turned around, and I was like, “my back fat is cute,” and it was just such a radical moment for me.

TM: What do you hope that young LGBTQ individuals, plus-size people, people struggling with their mental health, and those recovering from abuse, learn from your music overall?

ML: When people listen to the album, I hope there's a sense of understanding that so many of us are experiencing our own mental landmines, and struggles, and that struggle is universal. That there's this sort of shared experience in that.

TM: What advice would you give to women who still feel confined to the arbitrary rules that society sets for us?

TM: What has brought you the greatest joy and satisfaction since your career took off?

ML: I would say producing my most recent album. I think that's been a really incredible, and informative experience to not have a straight white man dictating the music, or having their own agendas within my music. To really let my voice, and my perspective, and point of view as an artist supersede those structures that are heavily in place, especially in the pop world...I think that's been a huge turning point for me.

I hope to be more explicit in speaking about and dismantling sexual violence and the systems that allow sexual violent acts to occur.

I feel like sometimes I speak with disdain about my pop career, or the experience that had being on a major label, but I think that having a pop song on the radio with the first line saying, “I have bipolar disorder…” was really radical, and I was really proud of hearing that first line on mainstream radio.

TM: What are some remaining rules that you're still hoping to break in your life?

ML: Especially with the next album, and my book, I hope to be more explicit in speaking about and dismantling sexual violence and the systems that allow sexual violent acts to occur.

TM: What new “rules” are you hoping to set for yourself, and for society in the future?

ML: I'm really proud that I don't have a label. I don't have formal management. I have an assistant that works for me fulltime, and I have a team of people that support me, and really help carry out my ideas, and desires creatively, and personally. I hope that more artists, specifically female artists, are able to see that.