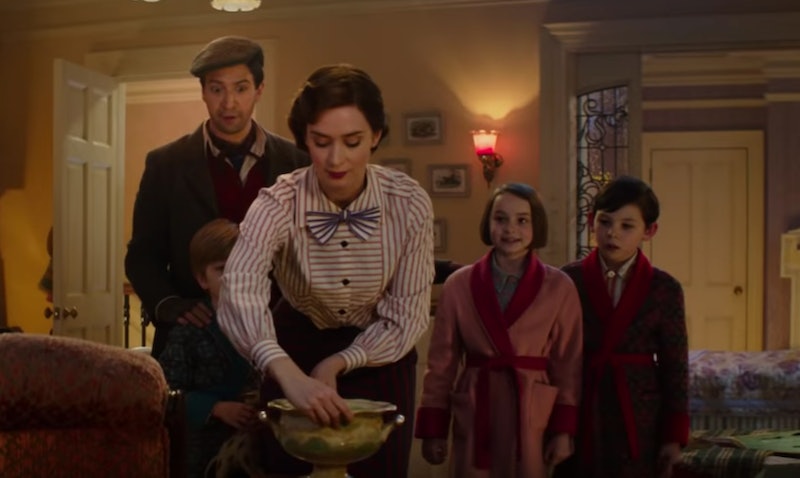 The Mary Poppins sequel may be arriving on the silver screen 54 years after the original movie hit theaters, but that doesn't mean that much has changed with everyone's favorite umbrella-flying nanny. Julie Andrews defined the character in the 1964 Disney classic, but now Emily Blunt has picked up the carpet bag's shoulder strap to reprise the role for a new generation of audiences. This could go on forever, but since Mary Poppins Returns doesn't have post-credits scene, it's still unclear if Blunt will play Poppins again. Spoilers ahead.

Even without a post-credits scene to preview a potential third Mary Poppins movie, Mary Poppins Returns provides some possibility for a future addition to the series. And there's more story to tell, considering the caregiving character returned for many iterations in the Mary Poppins children's books.

Author P.L. Travers began writing about Mary Poppins' adventures in babysitting with her 1934 book aptly titled Mary Poppins. From there seven sequels followed, so when Andrews' Mary Poppins soared into the sky above London at the end of the 1964 film, the character already had a much farther-reaching story written on the page.

If you look back at the ending of the original Mary Poppins, it leaves everyone — the characters in the film and the people watching it — hoping that they'll see the fabulous nanny again. Mary Poppins Returns has a similar effect of leaving its viewers wanting more, and it doesn't determine whether the series is finished for good. If another sequel were to come after the new Mary Poppins movie, Hollywood had better get started with it so that fans of the first two movies don't have to wait a whole other 54 years.

Just as Andrews and Dick Van Dyke defined the roles of Mary and Bert in the original movie, now Blunt and Lin-Manuel Miranda have likely become beloved by everyone who watches them play Poppins and her friend Jack, respectively. It's likely that the people who watch Mary Poppins Returns in theaters will want to see the movie's stars return as the same characters in the future, rather than having another pair of actors adapt the roles.

Miranda doesn't exactly play the same character that Van Dyke masterfully performed in the original Mary Poppins, as Jack is a lamplighter who Bert (Van Dyke) had trained. In an interview for British Vogue, Miranda explained how he attempted to play a character who was an homage to Van Dyke's. "Yes, I worked hard on trying to nail that cockney accent," he said. "If I've pulled it off, then you can thank Ms Blunt (if I haven't, then blame me)."

As much as the new Mary Poppins movie might differ from the original, Miranda revealed to Vogue that the new film's purpose is unchanged. "There's the same commitment to spreading happiness: to take people away from the craziness of today's world and give them a restorative shot of pure joy," the Hamilton creator said. If Disney were to create a third Mary Poppins movie after this one, it would likely have the same purpose, too, and that's exactly what makes the family films so special.