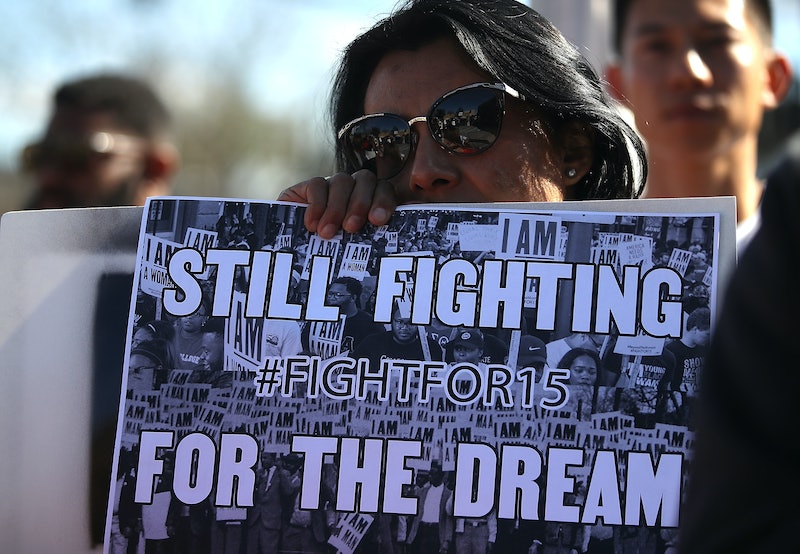 After a tense battle between the state's Democrats and its governor, Maryland raised its minimum wage to $15 an hour on Thursday, making it the sixth state to do so. According to Vox, the minimum wage bill was a source of great controversy in the state assembly. It was vetoed by Republican Governor Larry Hogan on Wednesday — but lawmakers in the state were able to garner enough support to override that veto a day later.

Upon vetoing the bill on March 27, Hogan penned a letter to lawmakers who supported the minimum wage increase, pointing out that Virginia, a neighboring state, has a much lower minimum wage floor. This discrepancy could hurt Maryland businesses, he argued. Per the letter, he wrote in part,

Small businesses faced with the choice between a $7.25 wage in Virginia or $15 in Maryland will be forced to create jobs in the lower cost location and possibly reduce jobs or eliminate operations in Maryland. Making Maryland’s minimum wage more than double that of Virginia could be too much for our economy to bear. How can we place Maryland’s workers at risk and Maryland businesses at so much of a disadvantage?

According to Vox, the state assembly voted overwhelmingly in favor of overriding Hogan's veto on Thursday, with a vote of 96-43 in the House, and a vote of 35-12 in the Senate.

Prior to this new increase, Maryland's minimum wage was $10.10. For a standard 40 hour work week (which would be a nine-to-five schedule), a worker on that salary would earn $21,008 per year, according to MinimumWage.org. Now, with $15 an hour, that salary will increase to $28,800 a year, approximately, according to The Huffington Post. To be clear, that's barely over the poverty line for a family of four, which is $25,750, according to the 2019 Poverty Guidelines released from the Department of Health & Human Services.

MIT's living wage calculator puts that salary into perspective for each state and county within that state. For example, in the Baltimore city area, MIT cites a "living wage" hourly rate for a family of four (with two working parents) to be $17.93.

As HuffPost notes, one of the most important (if not the most important) factors to consider when determining a poverty threshold is the cost of housing, which is becoming unsustainably high in many cities in America. According to Zillow, the median cost of a home in Maryland is $264,700. Perhaps more tellingly, per Patch, the estimated "cost of living" in at least 12 Maryland counties for a family of four is well over $28,000, when you take into consideration housing, child care, taxes, health care, food, transportation, and other necessities. In fact, none of those counties have a predicted cost of living that's lower than $76,000.

According to Maryland local news affiliate WBALTV, the minimum wage bill in Maryland will be instituted gradually. It will be $11 an hour next year, and will reach $15 an hour in 2025.