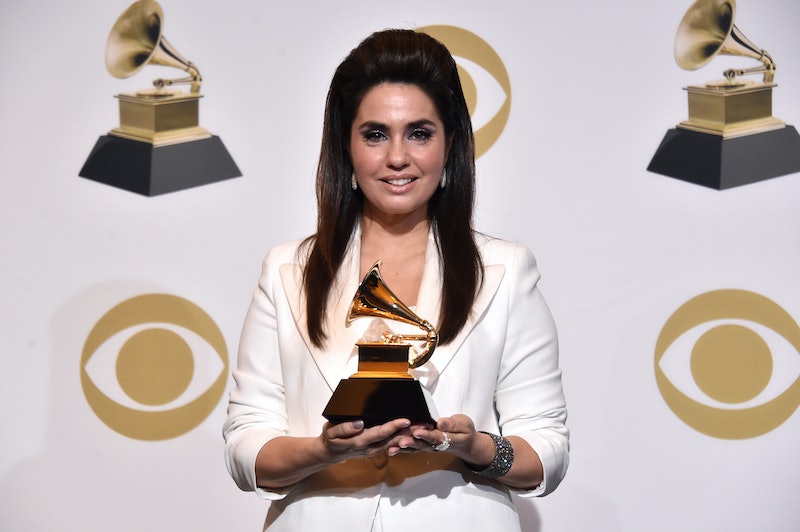 Beyoncé. Dolly Parton. Alanis Morissette. David Bowie. Wu Tang Clan. These iconic musicians are just a handful of the acts mastering engineer Emily Lazar has collaborated with over her storied career. In the industry, Lazar is known as an album whisperer. One of the go-to people for putting the final touches on music before it's released to the public. Touches like making sure that the album, track list, and song order all have a cohesive sound — so that when it's listened to as a whole, it tells a story.

While artists like Sia, Haim, and Coldplay now rely on Lazar to let their music truly sing, it was a long road to the top. According to USC Annenberg's study of the music industry, only 3% of music engineers are women. Lazar has felt this dearth firsthand. She spent years as the only woman in the room, experiencing what she calls "extraordinary" sexism in the music industry.

But Lazar is using her singular success as a platform for change. Like last year, when she became the first woman to win the Grammy for Best Engineered Album, Non-Classical for her work on Beck's Colors. As she collected her trophy, she shared a message of hope for the future: "I am so grateful to get to be one of the people... that young women see and they can say, 'I can see it. I can be it. That's cool career, I want to go do that.'"

Ahead of the 2020 Grammy Awards — where is Lazar is nominated for the fifth time, currently for Album of the Year with Vampire Weekend — Bustle spoke with the mastering engineer about her historic 2019 win, the advice she gives to Maggie Rogers, and the time David Bowie took a chance on a new kid.

Only 3% of music engineers are women. It's such a small group that Grimes has even called you the only one. How did you end up in this line of work?

Emily Lazar: I was originally an artist. I had a band and played guitar and wrote songs in college, so I was familiar with recording from that perspective. But I wanted to have a bit more control over how the songs that I was writing and producing came out and what they actually sounded like at the end of the day. So I started [mastering engineering] in the studios at Skidmore College. I had some great mentors up there that were really helpful, but I was the only woman in the classes.

I was aware that it was incredibly difficult. I was aware of all the obstacles on a theoretical level, but I was very busy trying to be me and do the best job that I could. When I got my first Grammy nomination for Foo Fighters' Wasting Light for Album of the Year, that was the very first time a female mastering engineer was nominated for that category. And that was in 2012. When I was nominated, someone asked me, "Has there ever been any women?" I was like, "I don't know." Then I did all this research and found out [I was the first]. It was super shocking.

So when I zoom out and look at the data, that's when it becomes very obvious to me. That's when I think about how we need to do better as an industry, and why I need to continue my focus on helping young women see that they can have these careers in STEM.

"There were so many horrible moments that I could walk you through and potentially ruin some people's lives out there. But that's not why I am on this planet."

You've mastered albums for some of the most famous musical acts in the world. Who's the first really big name to take a chance and hire you?

I did two records for David Bowie. The first was pretty early on in my career. David Bowie was working with a producer who did many records with him, named Tony Visconti, and I did a couple of other records with Tony as well. He's from a generation before me, so when he came up there were really no women. That showed some really great forward-thinking behavior on his part.

Did you feel that people were hesitant not only to take the chance on an up-and-comer, but with the sexism rampant in the field, to take a chance on a newcomer who was a woman?

Oh, the sexism was extraordinary. There were so many horrible moments that I could walk you through and potentially ruin some people's lives out there. But that's not why I am on this planet. I'm on this planet to make great records and try and change those things from whatever vantage point that I can to make a difference and illuminate for people why they shouldn't have those attitudes when they're walking into a room. But, you know it was terrible. I mean, it is terrible.

You now work with a lot of the female stars on the rise in music, like Maggie Rogers, Haim, and Clairo. What has it been like to now be the veteran in the room?

I'm working with Haim now on their third album and I've done their last two. Those three women are incredible. As I've grown up and aged into different roles with the bands that I'm working with, my conversations with Maggie Rogers and the Haim sisters and some of my other clients that are younger than me are a little bit different and really wonderful.

I wouldn't call myself a mentor, but I would definitely say that I love to help them feel empowered in the process so they don't have to experience the frustrations that they've had in the studio or they can have a dialogue where they actually feel heard. I'm very aware of [these problems] because they happened to me, but there's so many great women out there right now and I feel like we're making strides.

Last year, you won your first Grammy, making history as the first woman to win for Best Engineered Album, Non-Classical. You made sure that people everywhere knew it was a historic moment in your acceptance speech. What was it like to turn that moment into a rallying cry for representation?

Well, it was certainly very unplanned. It was important to me in the midst of #MeToo, and the fact that the Annenberg study had just come out, [to show] how big the accomplishment is for a woman to be standing up there, because it is so rare. It's important to be able to inspire young female engineers to know that, if you can see her, you can be her, you know? Here I am. I did it and you can do it, too.

We're seeing the potential for more of these firsts. For example, there's potential for the composer of Joker to become one of the first women ever to win Best Original Score at the Oscars. But before there can be these wins, there has to be the opportunity.

It's not just who wins, which is obviously a big deal, but it's that [women] aren't even being nominated. It's taken women in behind-the-scenes roles quite a while to bust through the door. I'm just really grateful to get to be someone who can try to inspire other people to jump in the game.

What would an Album of the Year win, which would make you the first woman to ever win this category, mean to you?

That's the biggest award of the night. They're all amazing records in the category, but I have a real soft spot for Vampire Weekend. [Lead vocalist] Ezra Koenig is an incredibly special artist who is a true visionary. He's specific about the artistic choices he makes and it's always a treat to collaborate with him. So winning for this album [Father of the Bride], which we worked on together over the span of quite a while, would be really fantastic.