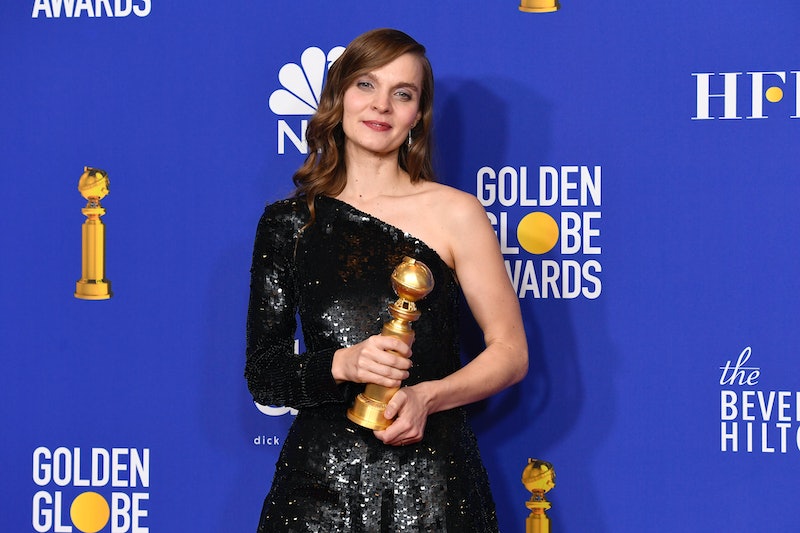 While Monday morning's Oscar nominations might have shut out female directors, cinematographers, and film editors — there's another category where a woman may make Academy Award history: Best Original Score. Icelandic cellist and composer Hildur Guðnadóttir was nominated for her work on Joker, the controversial film which led the pack with 11 nominations. Only seven women have been nominated in this category in the Oscars' 92-year history, with three having won, so far. But regardless of nominations, women are lucky to get hired for the job in the first place. According to a study done by the Center for the Study of Women in Television and Film at San Diego State University, of the top 250 films at the domestic box office in 2018, 94% were scored by men. So whether you love Joaquin Phoenix's gritty portrayal of Arthur Fleck — the mentally ill man who would become the Joker — or think that its nominations are one big, well...joke, Guðnadóttir is definitely a nominee to root for.

As a musician, Guðnadóttir's cello can be heard in films such as Sicario, The Revenant, and Arrival. She co-composed a number of under-the-radar films before landing the job of composing for Sicario: Day of the Soldato. Guðnadóttir's most recognized work before Joker was her haunting score for the HBO miniseries Chernobyl, a gig for which she visited the deserted site of the 1986 disaster to record ambient sounds.

For Chernobyl, Guðnadóttir was awarded an Emmy for Outstanding Music Composition for a Limited Series, Movie, or Special, and has received a Grammy nomination for Best Score Soundtrack for Visual Media. Earlier this week, she took home the Critics' Choice Award for Best Score for Joker. And last week, she won the Golden Globe for Best Original Score, becoming the first solo woman to ever nab the award. Needless to say, Guðnadóttir is on a winning streak, which makes her likely win at the Oscars all the more exciting.

Few women have won awards for composing film music, let alone been hired by major studios for the job in the first place. In addition to the dismal 6% figure provided by San Diego State, another 2018 study by the University of Southern California revealed that "for the top 100 fictional films at the box office every year from 2007 to 2017, only 16 female composers were hired, compared with more than 1,200 men," The New York Times reports. In that same Times story, a number of female composers interviewed cited "institutionalized sexism" and the lack of "female role models" as some of the reasons behind the dearth of women in the field. As an example, just last year, composer Pinar Toprak became the first women to score a Marvel film.

If there's one thing that stands out amongst all of their stories, it's the fact that while these women are excited to be celebrated, their hope is that the industry will get to a point where having a female composer will simply be the norm. As Guðnadóttir told Deadline this morning, "I think it's just wonderful to be a part of that conversation, and in the kindest way possible say, 'Hey, isn't this a bit ridiculous?'"

And in terms of recognition at the Oscars, the first woman to win an Academy Award for a musical composition wasn't until 1983, for Yentl. Lyricist Marilyn Bergman shared the win with her husband, Alan Bergman. But back then, the category was known as the Original Song Score and Its Adaptation or Adaptation Score Oscar, an award specified for musical movies. Over ten years later, Rachel Portman became the first solo woman to win a Best Score Oscar for her work on 1996's Emma. While just one year later, Anne Dudley won for scoring The Full Monty.

It should be noted, however, that both Portman and Dudley's Oscars were for Original Music or Comedy Score. Meaning, essentially, that if Hildur Guðnadóttir wins on Oscar night, she will actually be the first women to win the Academy Award for the all-encompassing category titled Best Original Score.

Guðnadóttir's possible win would indeed make history, but while her haunting score is critically adored, the film as a whole isn't without controversy. There's no denying that the Todd Phillips directed Joker is a divisive movie. Since its premiere at the 2019 Venice Film Festival, the film has been met with backlash. In one instance, family members of the victims of the 2012 shootings of The Dark Knight moviegoers in Aurora, Colorado even wrote a letter to Warner Bros. expressing their concerns about the film's violence.

Yet regardless of how you feel about Joker — whether you believe it's commenting on violence and male entitlement in society or simply serving as an example of such — a win for Guðnadóttir would not only be deserved, but a step in the right direction for the Academy's slow, plodding march towards inclusivity.

"I do feel like, in the last [few] years, there’s been so much awareness about the position of women in this industry, and as a result of all that discussion, people are noticing the situation more. That's the best place to start, is to talk about it," Guðnadóttir also shared with Deadline. "But I think the way to make actual change is to start trusting women and giving them chances."

It's amazing that, given the bummer statistics in the composing field, Guðnadóttir has been given this chance. Now let's hand out more chances along with those golden statues.

More like this
What Is Elvis Presley’s Net Worth? How The King Earned & Spent His Fortune
By Grace Wehniainen
The 'Hocus Pocus' Sequel Finally Has A Release Date & It Makes Total Sense
By Shannon Barbour and Radhika Menon
Everything To Know About 'My Big Fat Greek Wedding 3'
By Grace Wehniainen
Alicia Silverstone Has Recreated An Iconic 'Clueless' Scene
By Frances Stewart
Get Even More From Bustle — Sign Up For The Newsletter