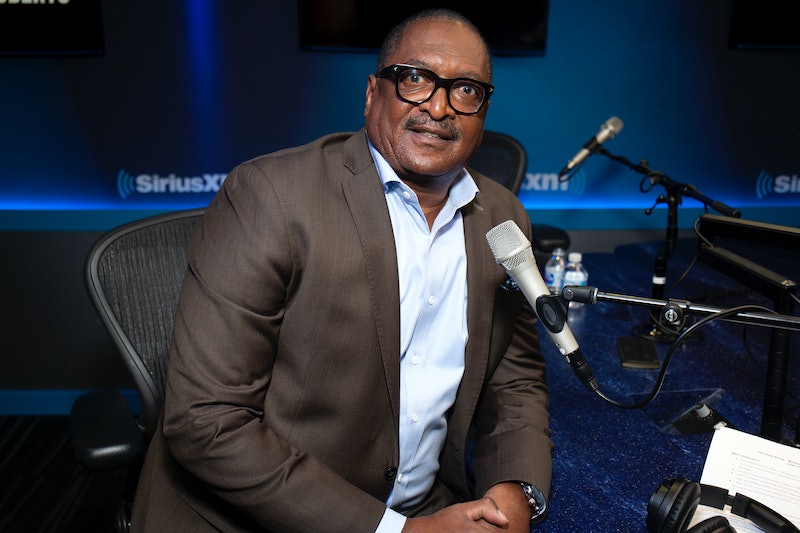 Speaking with Good Morning America, music executive Mathew Knowles revealed that he had recently been diagnosed with breast cancer and a BRCA2 gene mutation. The father of music and pop culture icons Beyoncé and Solange got checked out by a doctor after discovering small spots of blood on his shirts. Knowles is using his experience to encourage men to get screened for breast cancer.

"From a man's perspective," Knowles wrote about receiving his diagnosis, "I'm thinking, 'why me?'" After undergoing surgery at the end of July, Knowles said that he is doing "really good," but he wants men to know that early detection is the reason he's doing so well. "And I can't overemphasize the word early," he said.

Early breast cancer detection is especially important for people who aren't women, says Leigha Senter, a licensed genetic counselor at The Ohio State University Comprehensive Cancer Center. "Education about the possibility of male breast cancer is key," she tells Bustle. "It’s not something we hear about every day and knowledge can go a long way to promote early detection."

This early detection is important for people of all genders, given that trans women and transfeminine folks who take hormones are at higher risk of breast cancer than cisgender men, according to a 2019 study published in The BMJ. However, the study found that trans women still get breast cancer at much lower rates than their cis women peers.

However, the study concluded that overall, gender-affirming hormone treatment for people of any gender doesn't increase risks of cancer enough to be a deterrent to taking hormones. Still, according to the website of the American Cancer Society, nearly 3,000 cisgender men per year are diagnosed in the United States with invasive breast cancer, and the Society estimates that around 500 men will die of breast cancer in 2019 alone.

As Knowles highlighted, though, early intervention can make all the difference. Men and other folks who aren't women are often not taught to look for the signs and risks of breast cancer development. According to the Mayo Clinic, there are several symptoms of breast cancer development that men and people who were assigned male at birth should look out for. These symptoms might include the presence of painless lumps or breast tissue thickening; redness or scaling on your nipples, which might include discharge from your nipples; and a similar redness or puckering on the skin covering your breast.

This is especially so because you might be at higher risk for developing breast cancer on a genetic level. Senter tells Bustle that men with BRCA1 or BRCA2 mutations (genes that produce tumor suppressing proteins) aren't guaranteed to get cancer, but do have a much higher risk of developing breast cancer, as well as prostate cancer. "For men with BRCA2 mutations," Senter says, "the risk of breast cancer is about 6% compared to a 0.1% in the general population."

And with or without BRCA mutations, even cis women's risk of both developing and getting equal treatment for breast cancer varies depending on what kind of care you have access to, according to a 2007 study published in the American Journal of Epidemiology. For example, women of color with breast cancer are much more likely to have more advanced cases upon initial diagnosis than white women, according to a 2018 research letter published in the Journal of the American Medical Association: Surgery. In other words, the study concluded, women of color (especially Black women) are less likely to receive adequate screening and preventative health care in general and cancer care more specifically.

So for people of all genders, including men of color and Black men like Knowles, early detection and subsequent is of primary importance. "I'm hoping by me coming here today," Knowles said on Good Morning America, he will be "letting folks know that you can survive this."