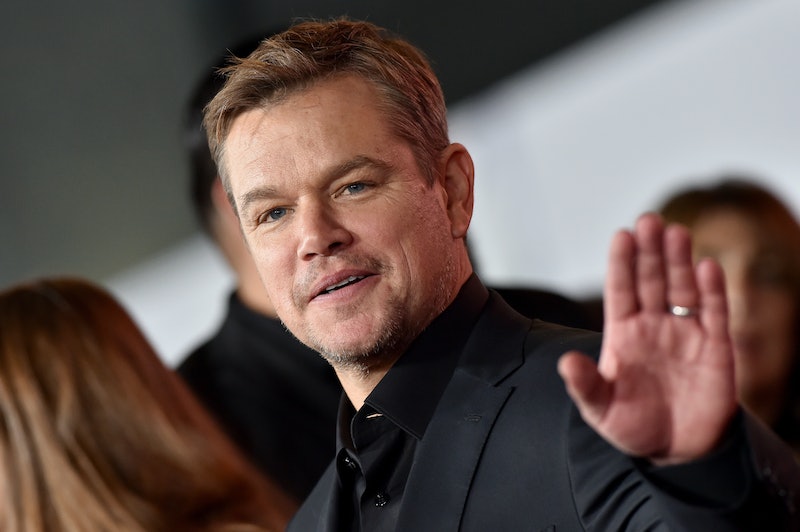 In April, it was revealed that Matt Damon has been 'adopted' by an Irish village during lockdown after a movie he was filming there got shut down. The star and his family have since been isolating in Dalkey, the cute seaside destination, of which the residents have become very protective over their new high profile resident. And in a new interview with an Irish radio station, Damon has finally spoken out about what it's been like for him and his family there — and, spoiler alert, he's totally loving it.

Local radio hosts Graham O’Toole and Nathan O’Reilly of Spin 1038 radio had been trying to get hold of Damon for a while now, in order to find out what life in Dalkey had been like for him. When Damon himself finally rang them up to give a surprise interview, O'Reilly could barely contain his excitement, stating: “look, Matt, I honestly feel like I’m about to throw up... this was a long journey in trying to track you down.” Damon revealed he had been listening to the duo every time he was in the car, and was waiting for their number to come up so he could get in contact.

Damon and his family came to Dalkey in mid-March, as he was set to film a new medieval drama movie called The Last Duel, directed by Ridley Scott. And while it may not be home, the family have found that the village has embraced the star as their own, even protecting him from Facebook groups which were revealing information about his whereabouts.

“The Dalkey people have protected you like a glorious gem,” O'Reilly told Damon on air, before O’Toole added that “a New York Times journalist also tried to infiltrate Dalkey,” and that residents “said, ‘No way. We are giving you no information on our prized possession, Matt Damon.’”

In response to this fierce protection, Damon expressed: “I laughed so hard when I heard that. That’s when I realised how great this place was and how protective everybody here is. I had no idea that all this was happening kind of behind the scenes.”

So what will life be like post-lockdown for the star and his family? Will he return to Dalkey to buy “a cheeky little holiday home" in the host's own words? Well, he will certainly plan to return to the area to finish his shoot, he said, before adding:

“Who knows what the world is going to look like. This would not be a bad place to wind up, though. I mean, we are really loving it.”