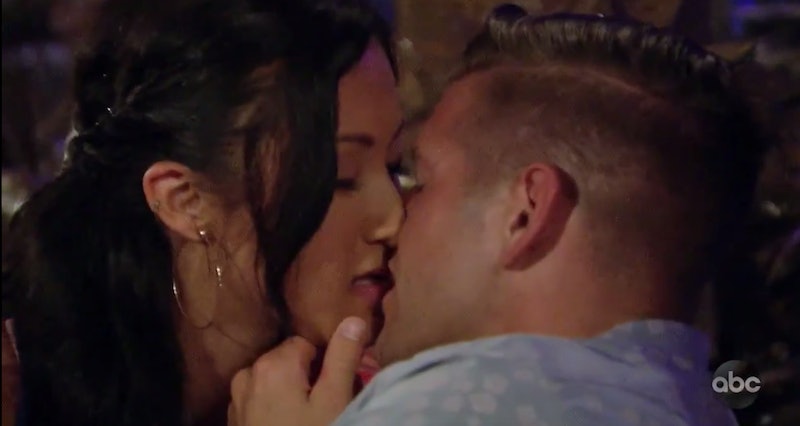 Ever since he showed up on Hannah's Bachelorette season with a tractor and serenaded her with a nursery rhyme, we've known Matt Donald was pure. But Matt Donald's tweet about his BiP kiss with Sydney only further proves it. In fact, he may be purest contestant to ever grace the show.

His reimagined lyrics to the classic nursery rhyme "Old MacDonald" included the phrase, "I'm Matt Donald and I'm really nervous," so we should've expected it in Paradise, but no one really anticipated the extent of his nervousness to be as intense as it was. He and Luke S. both got date cards, and he asked Sydney to join him. Sydney hadn't developed a strong interest in anyone on the beach throughout her entire time there, so she was excited at the prospect of finally finding a spark.

On their date, Matt talked about growing up in a deaf family and learning sign language as his first language, and when Sydney asked him to teach her some words, he set up a kiss perfectly by showing her the sign for "kiss me." But instead of kissing her, he just kept doing the sign. Both of them did, and stared at each other awkwardly before getting up to leave. In a confessional, Matt admitted that he couldn't stop thinking about what his mom would think if she saw him kissing a girl on national TV.

Sydney waited patiently because she felt a connection to Matt, and he continued to display very nervous behavior into the night. He was sweating profusely (like, so much that he asked John Paul Jones to dab his back with a towel), and almost every time he raised his voice to address the group, it cracked. Chris Harrison even poked fun at him by making a puberty joke. Poor guy.

Everyone on the beach persistently pressed Matt about kissing Sydney. They all gave him their best advice for making the first move. He said he wanted to kiss Sydney, but he's a gentleman and typically doesn't kiss on the first date. He was afraid of forcing feelings and moving too fast. So, whether or not he genuinely wanted to or just gave into peer pressure, he finally kissed her, multiple times, and everyone on the beach watched it happen.

Before it did, though, she verbally gave him permission to do it whenever he felt ready. "Can I kiss you now?" he asked, and she said, "Yeah, if you want to." Cue a sequence of truly epic editing: a rocket launched, a lion roared, a crowd cheered. Yet neither of them seemed particularly moved by it.

The next morning, newcomer Bri arrived with a date card and asked Matt on her date. Oddly enough, his apprehension faded immensely and he had no problem kissing her right off the bat. Unfortunately, that could mean he just didn't have feelings for Sydney and was too nice to tell her. Why? Because he's just a pure-hearted soft boi too good for the sin and debauchery of Paradise.