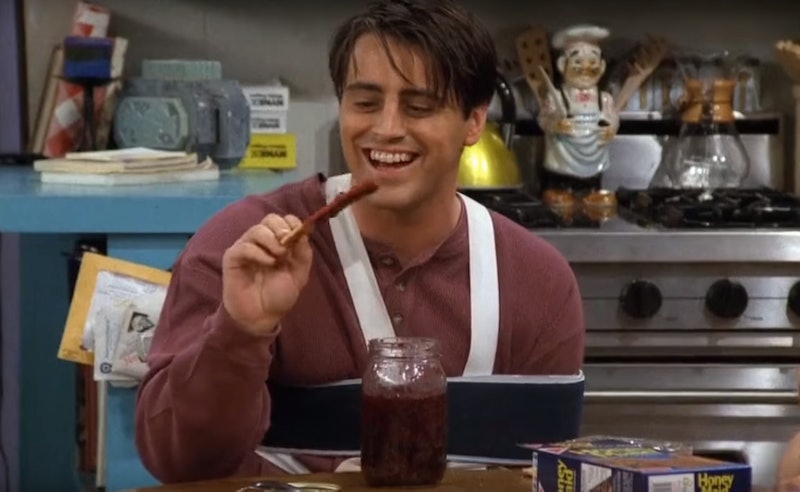 If you consider yourself to be something of a superfan of the show, then you likely recall the Friends episodes where Joey's arm is in a sling. It happens towards the start of the third season of the show and is attributed to Joey (adorably) hurting his arm after having jumped up and down on his bed. However, during Monday night's episode of Jimmy Kimmel Live!, it was revealed that Matt LeBlanc's Friends injury was real, sustained on the set of one of the show's most beloved episodes: "The One Where No-One's Ready."

As you may recall, that episode (which was the second of the third season) had Joey fighting with Chandler over a chair. The petty dispute escalated to ludicrous proportions, involving hidden underwear, airborne hummus, and some serious lunging. According to the Friends actor, the dispute also escalated to a dislocated shoulder.

LeBlanc explained about the scene in question:

"We both look at each other, look at the chair, and neither one of us are sitting in it. So we both race to the chair, and I have to just step over the coffee table and land on this big, huge comfortable chair. I don't even think it qualifies as a stunt. Somehow I ended up completely upside down. I was going to land on my head between the table and the chair, so I put my arm up to break my fall and exploded my shoulder."

Apparently, the whole audience thought it was all part of the act, and even laughed at him as he staggered off set.

To make the painful situation even funnier, LeBlanc also recollected how Anthony Edwards, who played Doctor Green on ER, which was filmed on an adjacent Warner Bros. stage, was watching the episode taping. He approached the actor backstage while he was suffering with the injury, to which LeBlanc apparently said to him, "wow, did I hit my head too? Because I know you're not a real doctor..."

Subsequently, Joey spent the next few episodes of the season with his arm in a sling. And though the show provided a convincing enough reason for that to be the case (because, duh, of course Joey would seriously injure himself doing something as childish as jumping on a bed), it was still always obvious that LeBlanc had actually injured himself in real life, too. Now, at least, we know why that was the case.