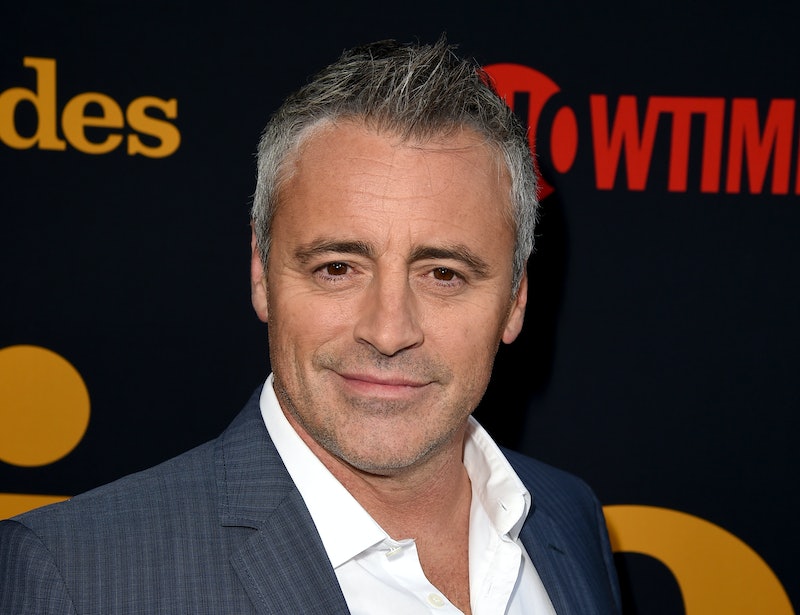 Call it the one where Joey gets nostalgic. The keepsake Matt LeBlanc took from the Friends set showed he really had a ball playing lovable ladies' man Joey Tribbiani on the iconic NBC series from 1994-2004. During a Jan. 25 interview on The Tonight Show Starring Jimmy Fallon, the actor first infused some of his trademark comedy chops. "I took from the show... It's funny. I took a [bleep] ton of cash," joked LeBlanc. (Indeed, each cast member eventually earned $1 million per episode, and is still making $20 million per year in syndication royalties as of 2015, per USA Today.)

But the star of the CBS comedy Man With a Plan quickly got real with Fallon. "No, you know what I have that's really cool?" he teased. "You know how in Chandler and Joey's apartment we had the foosball table? I have the actual ball from the table. The foosball. I mean, it's... I have it in my toolbox somewhere. Why it's in my toolbox, I don't know. But I ended up with the foosball."

Of course, Friends fans well recall the 1995 episode ("The One with the Dozen Lasagnas") where Joey and Chandler go shopping for a kitchen table but, true to form, come home instead with the foosball table, which, then, became a centerpiece of the apartment and subject of several storylines. (They could just as easily eat over the sink, after all.) Aside from the many games played, who can forget the disaster that ensued when the baby chick and duck got stuck inside the table?

And remember the famous Magna Doodle on the back of Chandler and Joey's apartment door? He admitted he also "clipped that at the end" because, as he joked to Fallon, he couldn't fit the couch in his car. Surprisingly, he didn't take the famous prop for himself, however.

"There was this one guy, Paul, on the crew, and he was the one that always drew whatever was on there," LeBlanc explained during the sit-down. "And he wasn't one of the writers, he was one of the electricians on the show. He just happened to be the artist that kind of drew always something relevant to the story that week on the thing. So I stole it and gave it to him, so he's got it. That was kind of cool, yeah. Could have sold it for a lot more, but..."

Although LeBlanc called his 10 seasons on the hit series "a blast," he also admitted that he has "a hard time watching it these days." The reason? "It's makes me feel 100 years old," he quipped to Fallon, who hilariously debated with his guest about the number of claps in the Friends theme song during the episode's cold open.

During an appearance on Live with Kelly and Ryan one day earlier, LeBlanc had elaborated on his feeling old, recounting one particular fan experience.

He does understand, however, how the "timeless" comedy has resonated with a whole new generation of fans — many who weren't even alive during Friends original run on NBC (and only know the show from re-runs or streaming it on Netflix). “It's great that people still discover the show, and it still feels kinda relevant," he said on Kelly and Ryan, noting that over the course of 10 years, they only included one topical joke. (If you're wondering, he added that it was an O.J. Simpson reference.)

“It’s about people in a phase of your life — that sort of after college and before your life starts,” LeBlanc previously explained to People in 2015. “There’s always going to be a new generation going through that, and they can identify with it because we kind of dealt with a lot of the issues that you deal with where your friends are your family. I think it’s good. I’m proud of it.”

And he should be proud because — even 15 years later — Friends is still there for you.