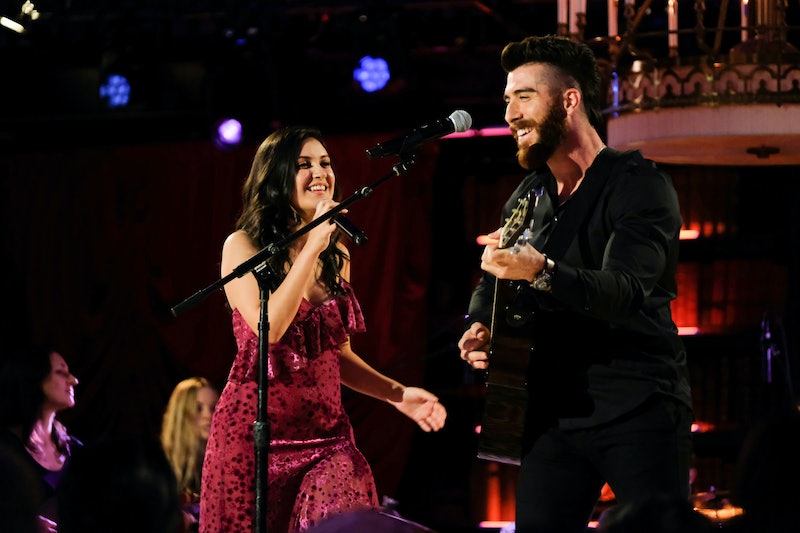 Rudi and Matt may not have been the last couple left standing on The Bachelor: Listen To Your Heart, but their future together — both as artists and romantic partners — isn't completely off the table just yet.In a post-show interview, Rudi and Matt revealed they still talk every day since leaving the show, indicating that not all hope is lost for Team Mudi.

Though they haven't been able to get together in person due to the coronavirus outbreak, Rudi admitted during an interview with Entertainment Tonight that they're still "feelings things out" in regards to their relationship and that despite the long distance "we don't go a day without talking to each other, so who knows what'll happen once we get to see each other again!" Matt echoed those sentiments during the same interview, adding, "We talk every single day. We will see what the future holds."

That's certainly a different tune (so to speak) from what Matt was singing during the finale, which ultimately led to them parting ways without ever going on their final date or performing in front of the judges. At the start of the episode, Matt confessed to Rudi that he didn't think they were at the same place emotionally with each other as the other two couples were and thought it would be best if they took themselves out of the competition. Rudi was understandably devastated, but they ended up separating on good terms.

Throughout the season, Matt has taken to Instagram to praise Rudi, both as a performer and individual, on multiple occasions. "I’m in absolute awe of you every time we perform," he captioned one video of the two of them singing. "Thank you for being who you are." He also shared a tribute to Rudi after the finale, looking back on their journey together and promising fans that there was "much more Mudi music to come."

Rudi hasn't been quite as forthcoming as Matt on her own account, though her posts about him suggest that she harbors no ill feelings toward him, even after everything that went down in Nashville.

Matt, however, definitely has some regrets when it comes to how he handled their relationship on the show. "I 100 percent regret what I said," Matt explained to ET, regarding his response to Rudi's declaration of love for him. "I wish I could have simply said I just wasn’t at the same point as Rudi, but I feel like we are moving in the right direction." And if anything, watching their romance play out on-screen only helps to solidify the growing feelings he's developed for her. "Watching it back only reaffirmed everything I already know, which is that I care so much for Rudi and we have an undeniable connection," he added.

As for how that connection will play itself out — musically or romantically — it seems only time will tell, but things are finally starting to look up for these two.

More like this
Brianna Revealed Why 'The Bachelor' Premiere Was Tougher For Her Than You Saw On TV
By Brad Witter
Bachelor Zach’s “Dream Job” Has Nothing To Do With His Work In The Tech Industry
By Brad Witter
Hannah Ann Got Engaged 3 Years After 'The Bachelor' & The Proposal Was Dreamy
By Grace Wehniainen
10 Photos Of The Wildest Limo Arrivals From 'The Bachelor' Premiere
By Brad Witter
Get Even More From Bustle — Sign Up For The Newsletter
From hair trends to relationship advice, our daily newsletter has everything you need to sound like a person who’s on TikTok, even if you aren’t.