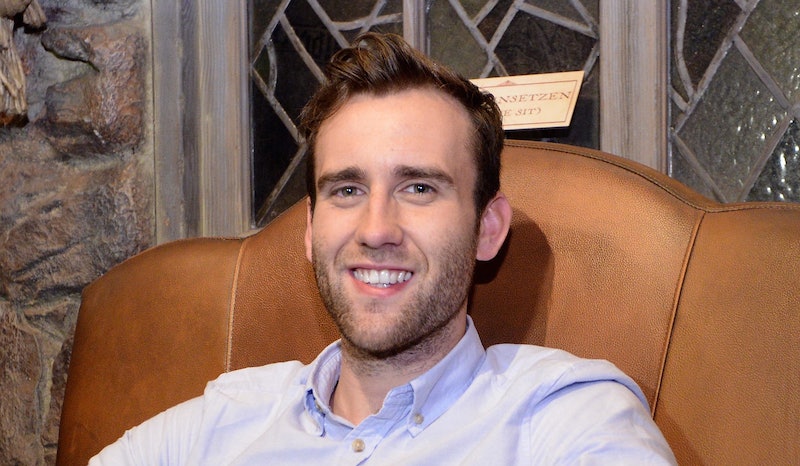 The Harry Potter cast may be all grown up and almost unrecognisable from the children who walked through the doors of Hogwarts in their oversized uniforms, but that doesn’t mean fans haven’t been holding out for a reunion all this time. In the words of Professor Snape, always. And one cast member has recently fuelled the fire in a big way. Matthew Lewis trolled Harry Potter fans with a tweet about an upcoming "reunion," and, when you hear the reason why, you won't even be mad about it.

Harry Potter must have one of the strongest fandoms out there. Children and adults alike are still obsessed and Matthew Lewis played on that this week as he tweeted out, “New Harry Potter film with original cast to begin shooting in 2020…” with a link.

To say that twitter went into a frenzy is an understatement. However, as hopeful fans clicked through to the link to establish what exactly this reunion would be, they were taken to the government website to register to vote. With the general election coming up, Lewis used his massive platform for good and I’ve got to say, I take my hat off to him.

And it’d seem like I'm not the only person who's impressed by Lewis’ efforts to ensure that everyone who can goes out and votes in December’s election. One person wrote under his tweet, “We Gryffindors know that sometimes the only way to make people do the right thing; is through manipulation. (In this case, a positive and a very clever one).” Another said, “This is clever. This is genius.” While there was some disappointment that Harry, Ron, Hermione, Luna, and Neville wouldn’t be going back to Hogwarts in 2020, everyone was pretty impressed by Lewis’ trick.

We stan a celeb who cares about what’s going on in politics, especially with something as important as the upcoming general election. Remember: you have until midnight on Nov. 26 to register to vote. Do it for Neville.

More like this
Fans Think Beyoncé’s “Break My Soul” Is Calling For A New Great Resignation
By Sam Ramsden
BTS Announced An Indefinite Hiatus & The ARMY Is Freaking Out On Twitter
By Sam Ramsden
Here's How To Stream 'Downton Abbey: A New Era' & The New 'Downton' Channel
By Alice Broster and Sam Ramsden
Twitter Has *A Lot* To Say About Justin Timberlake’s Beat Ya Feet Dance
By Sam Ramsden
Get The Very Best Of Bustle/UK