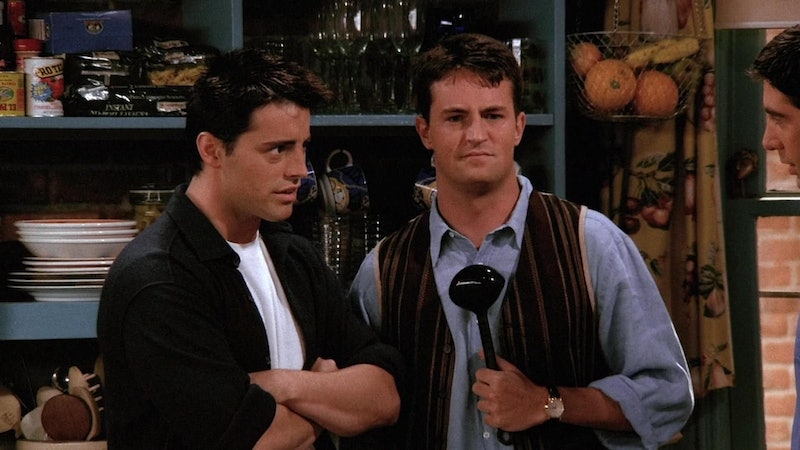 If you were a beloved actor with money, creative options, and nostalgic value, it might be hard to find something to have bad dreams about. So it was kind of touching to hear that Matthew Perry has nightmares about a Friends revival — because he's afraid a revival would be met with indifference. On one hand, it's easy to understand where he's coming from. But the one aspect of this story that doesn't totally add up is how the 47-year-old can truly believe that nobody would care about Friends coming back.

During an interview with Variety, the actor confided:

“I have this recurring nightmare. I’m not kidding about this. When I’m asleep, I have this nightmare that we do Friends again and nobody cares...We do a whole series, we come back, and nobody cares about it. So if anybody asks me, I’m gonna say no. The thing is: We ended on such a high. We can’t beat it. Why would we go and do it again?”

And, guys, come on. What series is more obsessed over and more loved than Friends? Given that the show has become a cultural touchstone for an entire generation, I'm on Perry's side. It's hard to imagine that a revival could ever meet the sky-high expectations we impose on the show. One can also understand the man we once knew as Chandler Bing's anxiety. Shows that we never thought would actually come back, like Twin Peaks, are back on your TV schedule. Go figure.

But, still. I know it's a nightmare, so that's his subconscious brain working rather than the logical part, but in what universe would we as fans possibly not care? While there's no official Friends twitter account, an account that tweets quotes from the show (which, it bears repeating, ended 13 years ago) boasts 411,000 followers. Similarly, when a fake David Schwimmer Facebook page uploaded what looked like a revival poster in May that appeared to suggest new episodes of Friends would be coming our way in fall 2018, Buzzfeed reported it was shared 235,000 times.

There are plenty of reasons to have nightmares about Friends coming back. A revival could be awful. It could leave people angry, disappointed and cynical about television. But, trust me, people would almost certainly care, one way or another.