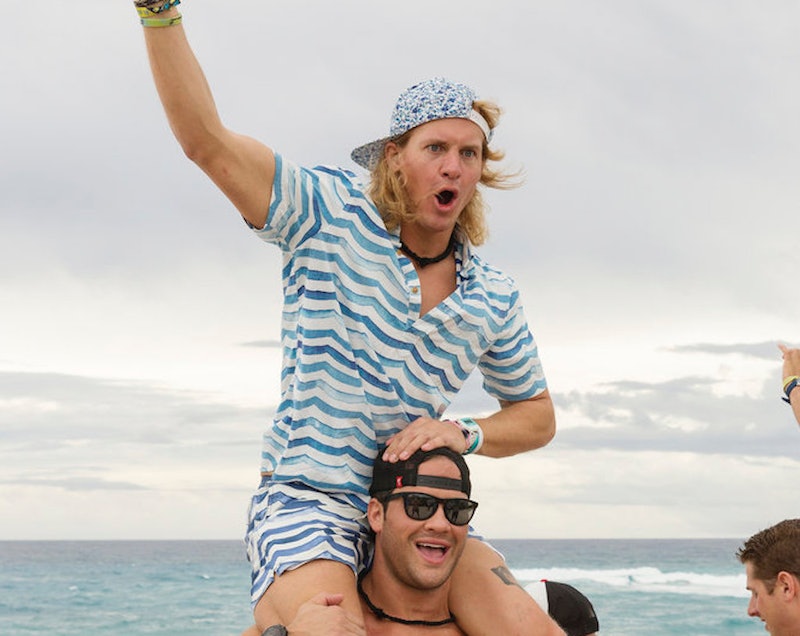 Bravo's new sailing show Unanchored is filled with fun-loving partiers. Perhaps none more so than Unanchored star Max Craddock. His Instagram keeps the party going 365 days a year, because even when he's not sailing around the world — he's traveling it.

Max would probably be the first to tell you that he's not ready to settle down, something that's frustrating to his fellow Unanchored star Vanessa Cavanaugh. The two have an on-again-off-again romance that has left Max wondering on the show if Vanessa could be a real girlfriend for him or just "a vacation girlfriend." Considering how many vacations Max takes, it's a good guess that he has a very strong opinion on the difference between the two definitions.

But while Max is good-natured, free, wild, and ready for fun at all times of the day, he's also had his serious moments. Or maybe moment. His Bravo bio says that he did graduate law school recently, and he had the intention of getting a steady job to settle down. But his bio says he failed the bar exam, so that's probably why he's back on the high seas partying in bars instead of studying for the bar.

But beyond what fans have learned about Max on the show, here's what his social media says about the star.

Yup, He's Always Been A Fan Of Traveling

Here he is in Norway.

He Briefly Moved To Australia

But not before traveling to LA, New York, Florida, Norway, Croatia, and Burning Man as he wrote in his caption. Wanderlust doesn't even begin to describe Max.

He Went Surfing On Christmas

When in Australia, do as the Australians do.

He's A Big Proponent Of The Sunset Instagram Pic

"Sunsets in LA are [key emoji]," he wrote in the caption.

Here's Another Sunset Pic As Proof Of His Obsession

This one was snapped in Italy.

He Also Loves A Good Sunrise

"Being up for sunrise is in, all the cool kids are doing it," he wrote in the caption of this Hawaii shot.

This is not a Craig on Southern Charm situation. Max really did finish law school, and this photo proves it.

He Prefers Being In Bars To Taking The Bar

"Studying for the bar? Nope. AT the bar," he wrote in the caption. In his defense, it would be hard to study while in Croatia.

"Sky's the limit with #Trump!" he wrote in the caption of this pic alongside the hashtag #pumpedfortrump. Not all reality stars will get political, but Max certainly isn't most reality stars.

He's Long Been A Fan Of Yacht Week

Here he is participating in Greece.

It fits his personality, for sure.

He Once Helped Transport A Large Wooden Bear

In a five-part photo series, Max — for some reason — decided to document the travels of this wooden bear.

Five Photos Later, The Bear Made It

It's not water sports only for this reality star.

He's Been Bitten By A Shark

He Just Cut His Hair

On Unanchored, Max is known for his lengthy blonde locks. But he's changed things up recently. He captioned this photo from August, "If you love something let it go!"

Perhaps that's also his current strategy with Vanessa on Unanchored...