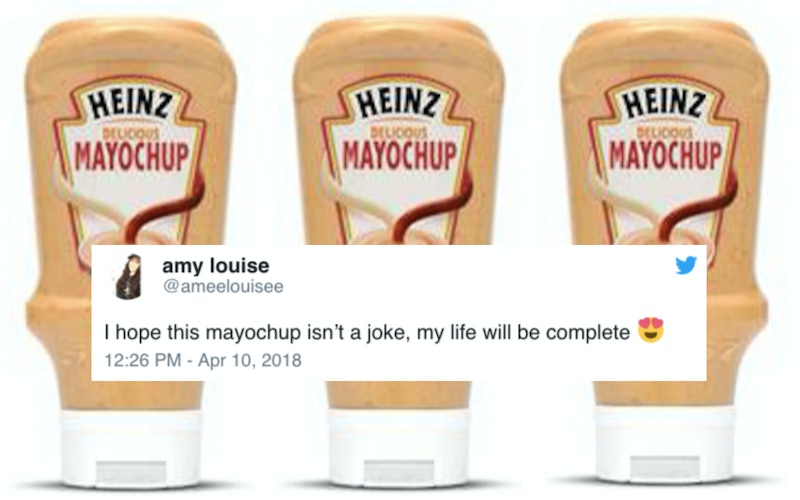 Friends, neighbors, fellow french fry addicts — we have all endured the timeless condiment struggle that is attempting to dip our beloved fried things in both ketchup and mayonnaise. The sense of ennui one feels when deciding whether to dip in the ketchup first and then the mayonnaise, or vice versa; the terrible, incessant cramping in our hands when we switch from one glop of condiment to another; the suffering that knows no bounds and has no name. Until now. Until this day in history, when it comes to my attention that Mayochup, a combination of ketchup and mayonnaise, is a real condiment from Heinz that a human can buy. Not just a condiment — a balm to soothe all that has ailed you for far, far too long.

Does it sound like the name of a rejected Pokemon evolution? Yes. Is it an embarrassing testament to the lengths humans will go to avoid doing an extra two degrees of moving their hands? Absolutely. Will you go to aggressive lengths to procure it anyway? Heck yes.

And those lengths truly will have to be aggressive, fellow Mayochup stans, because according to Heinz, the new concoction is only selling right now in the Middle East. If you live in the U.S., you're still going to have to mix your ketchup with your mayonnaise like the common food consumer that you are. In case you have forgotten how that works, Heinz has generously provided the internet with an instructional guide below.

Yes, my hand is cramping just looking at it, but Poseidon save me if it isn't worth it for that sweet, sweet Mayochup taste.

In the meantime, people obviously have a lot of strong #thoughts about this, because Twitter is nothing if not dedicated to hot takes on random food offerings in other countries. Unsurprisingly, many people are with me on Team Why The Heck Hasn't Mayochup Dominated The Market In Every Single Known Continent.

Some, however, are less than thrilled.

Others are just here for the memes.

And many people are coming out of the woodwork with their own versions of the true nature of Mayochup. Some are likening it to Pink Sauce, a sauce commonly used in spaghetti that is a combination of marinara and alfredo; while it does combine a creamy sauce with a tomato-based sauce, this may still be a bit off the mark. Others are comparing it to Marie Rose sauce, which is a ketchup and mayonnaise hybrid, but is typically also mixed with cayenne pepper or Tabasco sauce for an extra kick. Some people are also calling it out for being similar to Fry Sauce, another mayonnaise and ketchup hybrid that seems to be regionally popular.

But — scarily enough — the fate of Mayochup appears to be in our hands. Or half of a million of them, that is. The official U.S. Heinz Twitter account just promised (OK, tweeted — but TWEETS ARE BINDING BY LAW) that if they get 500,000 votes in favor of Mayochup, they'll bring it to the states. Do it for America. Do it for the children. Do it for that brief, three second pause during brunch when you look to see if there is both ketchup and mayonnaise at the table and have to reach out twice to grab them both.

In the meantime, if you're really, really aching to get your Mayochup fix and cannot fathom the horror of buying two separate condiments and mixing them yourself (what is this, 2017???), there are other versions of Mayochup available on Amazon. But they are probably more expensive than you were bargaining for, and, most upsettingly, are not called "Mayochup," which has become an unfortunate new favorite word in my lexicon. Have a Mayochup day, America, and to all a good Mayochup.