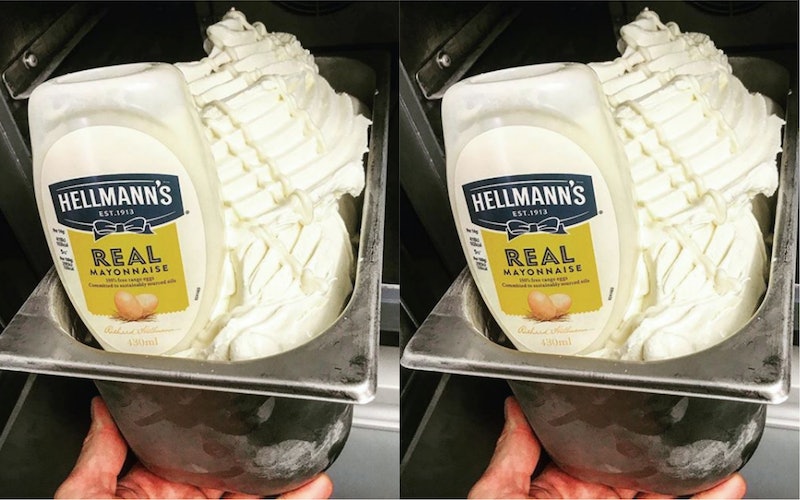 In a strange twist of culinary fate, mayonnaise ice cream is sweeping the internet — and truth be told, folks are torn. A creation of ice cream parlor ICE, based in Falkirk, Scotland, the mayonnaise-flavored ice cream is getting some pretty mixed reviews, and even mayo lovers are confused. Who knew that condiments could be ice cream, but more to the point: Should condiments be ice cream? TIME notes that the internet-fueled epicurean melee began when ICE introduced the new flavor via Instagram with the caption, “Who knows a mayo addict?” And, accordingly, Twitter is now awash in opinions, ice-cream-inspired anxieties, and even a little outrage. But according to a Today interview with ICE owner Kyle Gentleman, the controversial mayonnaise ice cream flavor is a “full on hit of fat and cream followed with a eggy, milky aftertaste.” That actually sounds somewhat promising?

I mean, mayonnaise is one of those things that’s great in moderation, right? Just a smidge is wonderful under the right snacking circumstances. But get too much mayo going, and things get weird real quick; because mayo runs a fine line between delicious and gross. To wit: There is such a thing as too much of a good thing. So a full bowl or cone of the mayo-flavored stuff? I’m not so sure how to feel about that, folks.

Mayo aside, the artisan ice cream makers at ICE specialize in offering some truly scrumptious sounding flavors. According to their website, their Falkirk shop houses such offerings as Strawberry Cheesecake, Caramel Wafer, Fresh Watermelon, and Nutella — and anything involving Nutella is alright by me. Sorbet flavors include Lemon, Pineapple, and Strawberry, and you can also grab some warm desserts at ICE like two flavors of chocolate chip cookies. And for those who love a good milkshake, you can snag either the classic chocolate or strawberry. Already garnering a strong customer base, the new Scottish spot is poised to launch “our very own brand of ice cream,” while remaining focused on creating original flavors for their unique and inspired array of house made ice creams.

TIME further observes that lots of folks are very much in their feelings about the new mayo-flavored ice cream launch, with one Twitter user likening the notion of mayo-flavored ice cream with “total depravity.” Still, there are others who seem willing to suspend their disbelief, and give the new flavor a chance: Like this user who said that “ice cream is eggs and milk and sugar,” while mayo is made with eggs and oil — so the new flavor might work in a custardy sort of way. And while the new ice cream parlor stands by its new flavor in a true spirit of culinary pride, for now, you’ll have to travel to Falkirk to try some. And if you’ve ever tried a chocolate cake made with a bit of mayo or sour cream, you know that this could work, people — it really could. So for those in the Falkirk area, maybe try the new mayo flavored ice cream with a scoop of chocolate, and godspeed, folks.