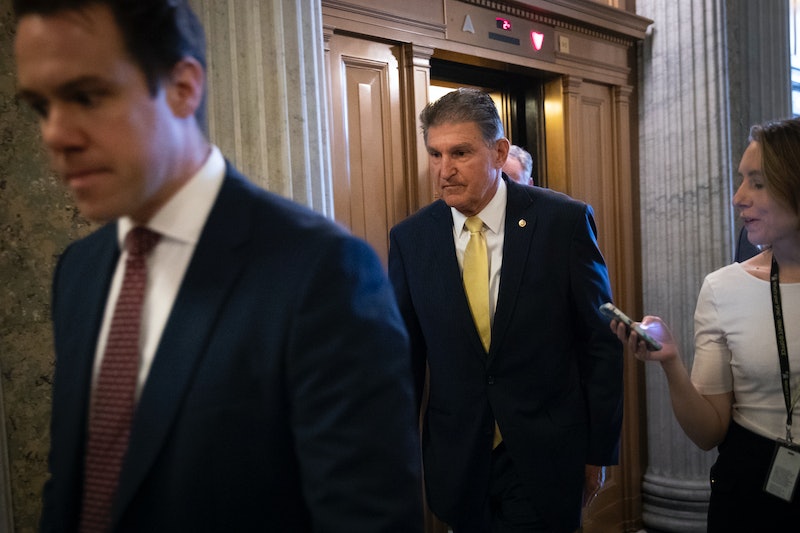 The senior senator from West Virginia broke rank — and it still might not make a difference. On Sunday, Senate Majority Leader Mitch McConnell said Republicans will campaign against Joe Manchin despite the senator's vote in favor of confirming Brett Kavanaugh to the Supreme Court.

On CBS's Face the Nation, host John Dickerson asked the Kentucky senator if Manchin's vote in favor of Kavanaugh's nomination to the Supreme Court would mean the GOP wouldn't campaign against him. "Will you recommend to the president that he not campaign against Joe Manchin who is up in 2018?" Dickerson asked. McConnell said Manchin remains a member of the Democratic caucus, regardless of his vote for Kavanaugh.

"Joe Manchin's still a Democrat and we're trying to hold the majority," McConnell told Face the Nation. "We appreciate his vote for Judge Kavanaugh." Manchin was the only Democrat to vote to confirm Kavanaugh to the Supreme Court. When he cast his vote, a lone protester from the Senate gallery shouted in a clear voice: "Shame! Shame! Shame!"

A day before the final vote, Manchin released a statement to confirm his plans to vote for Kavanaugh. "With respect to any cases that may come before him impacting the 800,000 West Virginians with pre-existing conditions, Judge Kavanaugh assured me personally that he would consider the human impacts and approach any decision with surgical precision to avoid unintended consequences," the statement read.

It continued, "That is why I voted to confirm Judge Kavanaugh’s nomination to serve on the Supreme Court because I believe he will rule in a manner that is consistent with our Constitution.”

But while McConnell agreed with Manchin's vote, it's separate from the election. "I think it was the right thing to do, but we're trying to win seats," McConnell said. A forecast from FiveThirtyEight estimated that there's a nearly 78 percent chance that the Republican Party maintains control of the Senate.

"And ironically the behavior of first Democrats on the Senate Judiciary Committee, and then the overreach of the protesters at the Capitol have actually energized the Republican base particularly in the red states where we're trying to pick up seats out across America," McConnell told Dickerson. The Senate majority leader then thanked the anti-Kavanaugh protesters.

During the Face the Nation interview, McConnell also defended the GOP's eight-month refusal to vote on then-President Barack Obama's nomination of Judge Merrick Garland to the Supreme Court. Dickerson and McConnell went back and forth on the history of the treatment of Supreme Court nominations by the Senate.

"You're completely misconstruing what happened. What I gave you is the history of this," McConnell told Dickerson after a back-and-forth about the reason Garland didn't receive a hearing. "I know the history of this. I've spent a lot of time on this throughout my career. What I did was entirely consistent with what the history of the Senate's been in that situation going back to 1880."

In another Sunday interview — this one with Chris Wallace of Fox News — McConnell left open the possibility of the GOP confirming a third Supreme Court justice under President Donald Trump in 2020. "The answer to your question is we’ll see whether there’s a vacancy in 2020," McConnell said.

CORRECTION: This piece previously misstated the state Manchin is from; it has been updated.