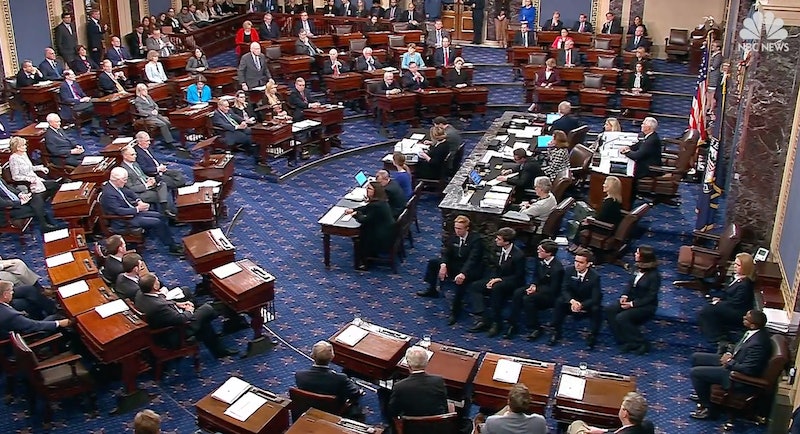 USA Today reported that the protesters started almost immediately after Vice President Mike Pence began the voting process. Pence was on hand for a potential tie, as the president of the Senate. Pence could be heard saying at least half a dozen times, "The sergeant at arms will restore order in the gallery," as protesters attempted to interrupt the voting roll call multiple times. The sergeant at arms "serves as the protocol and chief law enforcement officer" in the Senate, according to its website.

When Republican Arizona Sen. Jeff Flake cast his vote for Kavanaugh, one protester shouted, "You are a coward Flake, a total coward," according to USA Today. After West Virginia Sen. Joe Manchin, a Democrat, cast his "yes" vote, someone yelled in a clear voice: "Shame! Shame! Shame!" According to Politico's tally of the final vote, Manchin was the only Democrat to vote for Kavanaugh's nomination. He's up for re-election in November, according to The New York Times.

"History is watching. We will not forget," one protester yelled at Manchin, according to USA Today.

Not long after Manchin's "yes" vote, Pence announced the final vote. "On this vote, the ayes are 50. The nays are 48," Pence said. "The nomination of Brett M. Kavanaugh to be an associate justice of the Supreme Court of the United States is confirmed."

Then Senate Majority Leader Mitch McConnell asked that President Donald Trump be notified of the action immediately. One more protester shouted from the Senate gallery. "This is a stain on American history. Don't you understand that?" the protester shouted.

And once again, Pence said, "The sergeant at arms will restore order in the gallery."

The day before, the organizers of the Women's March helped organize a mass protest against Kavanaugh's confirmation, which ended at the steps of the Supreme Court. And on Thursday, hundreds of protesters, including comedian Amy Schumer and model Emily Ratajkowski, were arrested at a protest at the Hart Senate Office Building, according to The Washington Post. The newspaper reported that at least 293 people were arrested on suspicion of unlawfully demonstrating.

Time will tell if the protests will continue to be organized as Kavanaugh is sworn into his position on the nation's highest court.