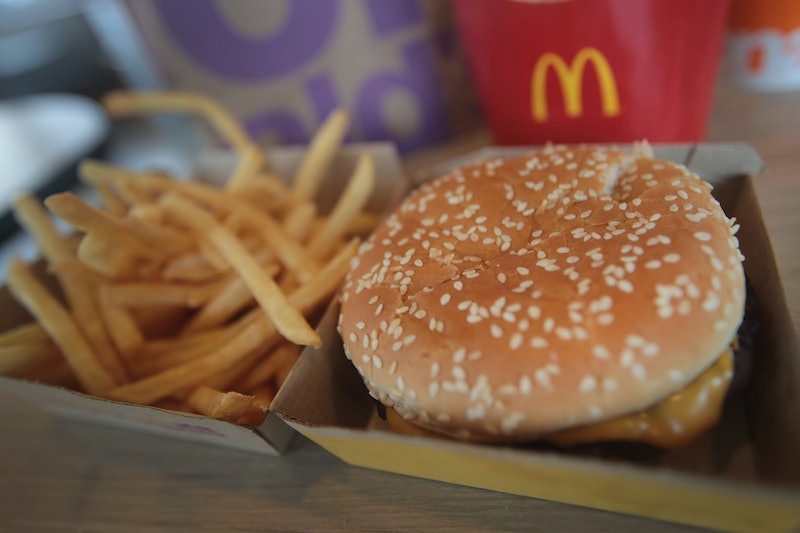 At last, the fast food gods have heard the pleas of their Northeastern customer base. This week, McDonald's delivery expanded to New York, New Jersey, and Connecticut, along with a few other cities scattered across the country. Considering how easy it is to get pretty much anything delivered in the Big Apple, I'd say this news is long past due, but it's still a cause for celebration. Never has it been so easy to have greasy, salty deliciousness delivered straight to your dinner table — or, more accurately, the couch where you've been watching Netflix for the past 12 hours.

Of course, any fast foodie worth their high sodium content already knows that it was already possible to get McDonald's delivered through third-party services like Postmates and DoorDash. Mobile ordering, which offers curbside pickup, has also been available for some time. In January, however, the fast food chain partnered with UberEATS to test out their own method of delivery in a limited number of cities in Florida. The testing process was a success, which comes as no surprise, and McDonald's has announced that "McDelivery" is available in more than 1,000 new locations right now. Yes, you read that correctly — if you're in one of the areas reached by delivery, you can have an order sent to your door at this very moment.

According to a press release, delivery has expanded to locations in Los Angeles, Chicago, Seattle, Dallas, the New York metro area, and more. Currently, it's available in more than 2,000 McDonald's restaurants in the United States, and the company plans to reach 3,500 by the end of June.

If you're interested, all you have to do is place an order through UberEATS, either online or via the app. According to Eater, you can order anything but soft serve cones, and a McDonald's representative told Bloomberg that on average, delivery takes less than half an hour. The service does charge a flat fee of about $5, but depending on the cost of your order, that may be more affordable than the sliding fees of other third-party delivery services.

The expansion has been met with a mixed reception online. While some are excited by the prospect of ordering a Big Mac (or a Frork) without leaving their blanket burrito, others are less than enthused.

For anyone on Team McDelivery, though, 2017 is a clearly great time to be alive.