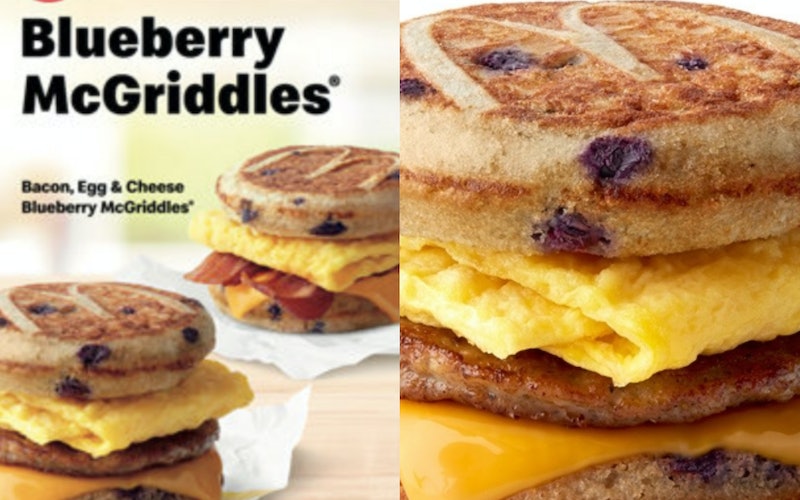 We are in the thick of summer and that's evidenced in the heaps of blueberries available at the market — and at McDonald's. Yes, you heard me! Our favorite fast food is getting in the summer spirit. McDonald's is testing three new Blueberry Breakfast McGriddles and my body is ready. Move over, blueberry pancakes, there's a new berry based breakfast in town. Or, well, at least one town.

Per Chewboom, the three new breakfast McGriddles are being tested in Washington D.C. only. They'll be available at more than 100 locations across the metropolitan area. And because blueberry season isn't forever, they'll only be available at participating locations for a limited time — and only during breakfast hours, because, those are the rules. Listen, I wish summer and breakfast lasted forever too.

If sausage isn't your thing, but bacon is, you'll be delighted to know there's a Bacon, Egg and Cheese Blueberry McGriddle sandwich too. The melty cheese, fluffy egg and blueberry griddle cakes will all still be in attendance. Bacon will substitute for the sausage. The third and final McGriddle being tested is for those who like to keep things basic. The Sausage Blueberry McGriddles sandwich is just that. Sausage and blueberry griddle cakes. In other words, sweet and savory harmony.

"The flavors from the real blueberries balanced with the sweet taste of maple, reminds me of the blueberry pancakes my mother used to make for us growing up. Imagine that combined with your choice of sizzling breakfast sausage or thick cut bacon nestled under a creamy slice of American cheese and fluffy egg," Carol Martino, Culinary Innovation Spokesperson for McDonald’s USA, said in an official press release. It's all the best parts of breakfast — sweet and savory — built upon each other for the most epic morning bite.

The testing comes after local customers articulated their desire for a more indulgent breakfast item. "Our customers have told us they are looking for a more craveable breakfast option on the go, so we listened. McDonald’s is always looking for ways to innovate, and the Blueberry McGriddles breakfast sandwich is the newest way to indulge in sweet and savory brunch flavors while sticking to your weekday morning routine," the press release states. Next time you're at your local McDonald's, speak up!

There's no official word on whether the Blueberry McGriddles will grace McDonald's menus in other cities once the initial response has been gathered. But here's hoping that the powers that be are ~berry~ pleased with the results so that us non-D.C. residents can get a taste.

The newest fruit freckled McGriddles to hit D.C. join the menu's classic McGriddles, which are widely accessible to breakfast lovers across the nation. The classic McGriddles are also listed as items on McDonald's All Day Breakfast. I will consider any quick savory breakfast past 11am from McDonald's — blueberries included or not — a win for those of us who are not residing in Washington D.C.!