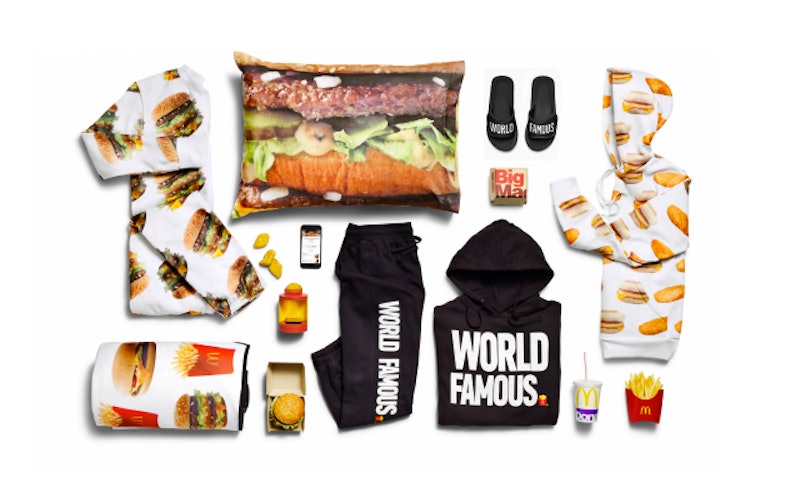 You've probably heard of this fast food company's McPick 2 deal, but it's about to get even better. McDonald's created a merch line and they're giving away the items for free — sort of. I'm talking everything from Bug Mac-printed onesies to "World Famous" slides. All you have to do to get the apparel is to order form McDonalds. It's that simple! Pinch yourself, because this is not a dream.

Merch lines might have picked up steam in 2016, but this year they're taking a quirky turn. Most recently, KFC jumped on the clothing line bandwagon with their "Finger Lickin' Good" necklaces and trendy tees. Now it looks like McDonald's is doing the same. To promote their new delivery service — yes, you read that right — McDonald's created a line of merch to giveaway with every order. There are six different items to choose from, ranging from pillow cases to sweatshirts.

According to their Instagram announcement, all you have to do to get in on the merch is order McDonald's from UberEATS. The ride company will be delivering meals in select cities on July 26 at 11 a.m. ET. This is only a one-day deal, according to the social media post, so set your alarms.

At this time, there's nowhere to buy the merch from. The only way to stock up on the apparel is to order on July 26. It's also unclear whether you'll be able to pick your favorite items or get the items at random. One thing is for sure though — this deal won't be around forever. The merch is only available while supplies last, so the sooner you get hungry the better.

According to their website, UberEATS has been delivering food from McDonald's since January. This is the first time that they're giving away merch with the meals though. While you do have to order food to get the items, everything from McDonald's is so cheap that you really can't go wrong.

Bottom line: stop what you're doing and set you alarms right now. You won't want to miss out on the deal, especially when you can get it all without leaving the house.