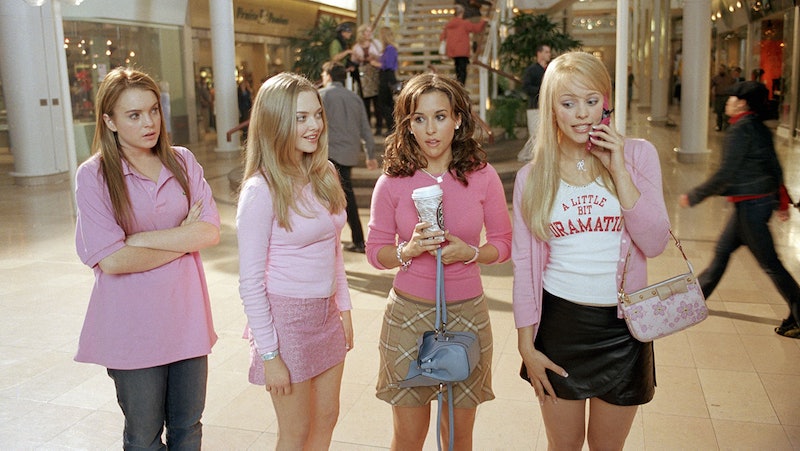 "It's October 3rd." How could we have known all those years ago that these three little words — a direct quote from the 2004 cult comedy Mean Girls — would result in a holiday so fetch, we're still as excited about it as we were 13 years ago? Considering the Mean Girls memes and tweets that are floating around the interwebs on Oct. 3, it really might as well be a national holiday since it is so widely celebrated year after year. In case you need a little refresher, Mean Girls brought us gems like the word "fetch," Karen as a whole, and some of the best one-liners of all-time, like "On Wednesdays, we wear pink." The flick is not only one of the most quotable movies ever, it is also the inspiration behind some of the best squad Halloween costumes from sexy mouse to, of course, those classic and ever so tasteful Christmas costumes.

We celebrate this day of course, in honor of all things Cady Heron (Lindsay Lohan) and Aaron Samuels (Jonathan Bennett) because Oct 3 was in fact the day that things kind of, sort of but not really, started to get serious between the duo when, on Oct. 3, Aaron asked Cady during calculus class what day it was. "It's October 3rd," Cady replied.

In honor of this national treasure of a movie, I've compiled a few amazing Mean Girls memes and tweets from celebrating fans to get you in the holiday spirit.

The Quote That Started It All

I mean, it sort of is like a birthday. But better.

The Classic, No Other Words Needed

Bless dear Gretchen's heart, she really tried to make fetch happen. Of course, we all know how that one worked out. Opposite of fetch, Gretch.

An Underrated, But Classic Line

This one is classic Regina being the badass biotch we all know and love. It's also just one of those lines that's so cutting and hilarious that it never seems to get old. Also, A+ for the visual.

I'm Sorry People Are So Jealous Of Me

If You're Wearing Pink, You're Doing It Wrong

Keep in mind that even though it is Mean Girls day, it's still a Tuesday in 2017, and we don't wear pink on Wednesdays. That said, when Oct. 3 does fall on a Wednesday in 2018, it's gonna be liiiiiit.

Probably An Inside Joke

I feel like this meme is actually probably some sort of inside joke for whoever actually attends mandatory floor meetings every Wednesday at 9 p.m. in the lounge, but I still appreciate it, because Toaster Strudel.

Can anyone blame her? I would even go so far as to say their quote choice matters as well, because whether someone prefers a Kevin G quote over a Cady quote says a lot about them. (I'm a Glen Coco gal, myself.)

Oh I See What You Did There

The limit does not exist in math and in how many times I'm going to tell people that they go, Glen Coco on this day. I don't even think I've ever met a Glen Coco, but I feel like on this blessed day, we are all Glen Cocos. So, that said: Four for you, Glen Coco. You go, Glen Coco.

Not a meme, but even more important: On a more serious note, I'll leave you with this one from Jarett Wieselman which is promoting the cast of Mean Girls' current goal to help raise money for the victims of the devastating attack in Las Vegas on the morning of Oct. 1. Check it out, and donate here.

More like this
23 Super Sweet Things To Write In A Valentine's Day Card
By Karen Belz and Lexi Inks
21 Galentine’s Day Memes To Celebrate Your Best Friends
By Meghan Bassett and Mia Mercado
Twitter Is Burning As Phoebe Dynevor Reveals Daphne’s 'Bridgerton' Exit
By Sophie McEvoy
Twitter Is Saying The Same Thing About Beyoncé's Renaissance World Tour
By Shahed Ezaydi
Get Even More From Bustle — Sign Up For The Newsletter
From hair trends to relationship advice, our daily newsletter has everything you need to sound like a person who’s on TikTok, even if you aren’t.