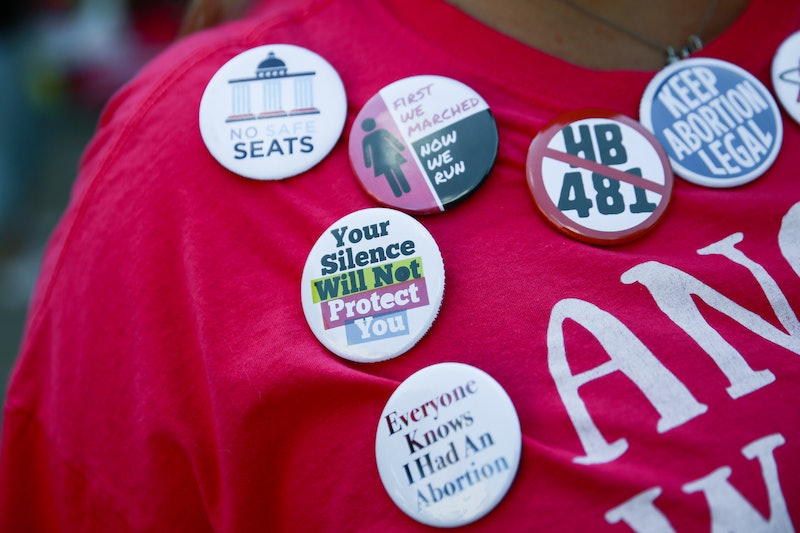 Sept. 30, 2019 marks 43 years since lawmakers passed the Hyde Amendment, a budget provision that bans federal funding for abortion. It affects Medicaid recipients, and people in the military, the Peace Corps, or any other position with federally-funded health insurance. There are only exceptions to the amendment in cases of rape, incest, or when the pregnant person's life is in danger. Despite the fact that the amendment has been passed every year since 1976, a new poll shows that Medicaid coverage of abortion is becoming increasingly popular with voters.

The survey, released Monday, was conducted by Democratic polling firm Hart Research Associates and commissioned by All* Above All, a group that works to restore public insurance coverage for abortion and opposes the Hyde Amendment. It found that a majority of voters across the country and in battleground congressional districts support Medicaid coverage of abortion services — and that the intensity of their support has increased in recent years. According to the poll, those who "strongly favor" Medicaid coverage for abortion increased from 31% in 2017 to 38% today.

The results reflect increasing support for access to abortion in the face of recent attempts by Republican lawmakers in some states to severely restrict the procedure or ban it altogether. And though the Hyde Amendment has been renewed every year, the new Hart Research poll suggests there is less public support for the amendment than lawmakers might think.

From Aug. 28 to Sept. 6, the poll asked 1,413 registered voters nationwide — and 407 registered voters from 44 battleground congressional districts across 24 states — questions about insurance coverage for abortion. It found that 62% of voters nationally favor Medicaid coverage of abortion services, compared to 38% who oppose it. That support is even stronger in battleground congressional districts, where 69% of voters favor coverage of abortion services under Medicaid while 31% oppose it, according to the poll.

Destiny Lopez, co-director of All* Above All, points out that the poll found the majority of voters across races, ethnicities, and in battleground districts believe the country is headed in the wrong direction when it comes to abortion access.

The Hart Research poll didn't ask about the Hyde Amendment by name, instead describing Medicaid and noting that Congress currently denies coverage for the costs of an abortion. Voters were asked if they would "favor or oppose enabling a woman enrolled in Medicaid to have all her pregnancy-related healthcare covered by her insurance, including abortion services."

Not only did the majority of voters favor Medicaid coverage for abortion, but the majority of voters across the political parties included in the poll — Democrat, independent, and Republican — said that, to some degree, they "believe politicians have no place denying insurance coverage for abortion for people who are poor or struggling financially."

The poll put two statements side by side and asked voters to choose which statement is much closer or somewhat closer to their point of view. The statements are:

However we feel about abortion, politicians should not be allowed to deny insurance coverage for it just because a person is struggling financially.

Using taxpayer dollars for abortions forces all of us to pay for them–even those of us who do not believe in abortion.

The majority of voters nationally, 63%, agreed with the first statement more than the second statement, according to the poll. In battleground districts, that number was slightly higher, with 67% of people agreeing more with the first statement. The poll also found 63% of Republicans nationally, and 59% of Republicans in battleground districts, agreed with the second statement more when it was pitted against the first.

Lopez points out that supporting Medicaid coverage for abortion, or access to abortion in general, doesn't match up with media depictions of battleground voters as anti-choice conservatives.

"We're seeing these numbers that are actually higher than our national sample in terms of the support for lifting abortion coverage bans like Hyde" in battleground districts, Lopez says. "If you think about who makes up the battleground vote now, it's suburban women. And as we know and has been well reported, I think suburban women are pretty outraged by what's happening with all of these abortion bans around the country, and I think that shows in our poll."

All of the 2020 Democratic presidential candidates support repealing the Hyde Amendment or codifying access to insurance coverage for abortion into law in some other way, according to Vox. Former Vice President Joe Biden is the one candidate who previously supported the Hyde Amendment and has since changed his position, saying at a Planned Parenthood forum in June that he supports repeal.

The Hart Research poll also found that a majority of voters consider the effects of restrictions on abortion — such as women being more likely to fall into poverty when they're denied an abortion — a "big concern."

"Medicaid withholding insurance coverage of abortion continues to be an insurmountable barrier to obtaining an abortion for [a] substantial minority of women," Sarah Roberts, an associate professor and researcher with Advancing New Standards in Reproductive Health (ANSIRH), a research group at the University of California, San Francisco's Bixby Center for Global Reproductive Health, tells Bustle.

Roberts and other researchers with ANSIRH surveyed 269 women presenting at first prenatal visits in southern Louisiana from 2015 to 2017 and asked those who reported having considered abortion whether Medicaid not paying for the procedure was a reason they hadn't had one. The researchers estimated that about 3,000 women in Louisiana who have Medicaid give birth each year instead of having an abortion because Medicaid doesn't cover it.

But Roberts says she and her team found that Hyde doesn't necessarily prevent people with federally-funded insurance from getting abortions. People on Medicaid can still pay for an abortion out of pocket, which Roberts says is often a significant financial burden that can delay the procedure. She points to a 2014 study she and other researchers at ANSIRH conducted, which found that, for more than half of women whose abortions weren't covered by Medicaid or private insurance, the out-of-pocket costs were equivalent to more than one-third of their monthly personal income. The study found the costs were equivalent to two-thirds of monthly income for people receiving later abortions.

Dr. Jamila Perritt, an OB/GYN who works at Planned Parenthood facilities in Washington D.C. and Maryland and a fellow with Physicians for Reproductive Health, says that the Hyde Amendment creates a "two-tier" health care system in which people who have private insurance are likely allowed to access all the services they need. By contrast, she says "if you rely on the federal government for your healthcare insurance coverage, then they decide what you're able to access and what you're not."

People with lower incomes who need an abortion not only have to pay out of pocket, but they might also have to travel long distances to a clinic and take off time from work, depending on the state in which they live.

"If you're talking about folks with lower incomes, those relying on Medicaid, then those additional burdens make it nearly logistically impossible to be able to access this care that those of us with private coverage or financial means can get when we desired and needed," Perritt tells Bustle.

The new Hart Research findings reflect what Perritt says people should be able to agree on, regardless of how they feel about abortion: "Politicians shouldn't deny anybody coverage because of how they're insured, and the Hyde Amendment is a really clear example of this happening."