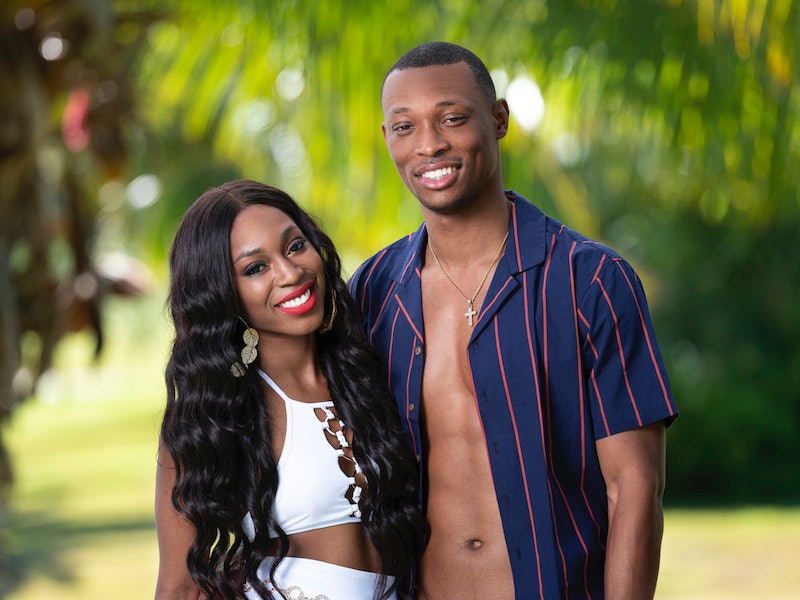 Spoilers ahead for Episode 2 of Temptation Island Season 2. Following Thursday night's Temptation Island episode, fans are probably pretty curious if Ashley G. and Rick are still together after the season — and that's putting it mildly. Ashley said she came on the show in order to test whether or not Rick could resist temptation, considering he'd been unfaithful in the past. But after a night with KB, it was her waking up next to someone else — and that was just based on initial attraction. She and KB seemed to get even closer on their date, while Rick explored his connection with Medinah. It's only been one day and already the couple seems like they couldn't be further apart, so one can only imagine where they might stand by the end of the four weeks.

Neither Ashley or Rick have confirmed whether or not they're still together, because obviously, they want people to watch the show (and are probably bound by a pretty firm non-disclosure agreement á la The Bachelor). But there are a few clues to be gleaned from social media. Not only are they both following each other on Twitter and Instagram, but they've been "liking" each other's posts. And just three weeks ago, Ashley wished Rick a happy birthday in a comment on one of his photos. That could be a cordial message from an ex, or it could be a subtle comment from a girlfriend who can't reveal that they're together until the season finale (although if they are together, couldn't she have told him happy birthday in person?).

That being said, Ashley is also in touch with KB, and it seems unlikely that Rick would be cool with her staying in contact with the man she cheated on him with if he was still in a relationship with her. "Hey @agoldsun u ain't so bad ya self," KB commented (along with, and this can't be stressed enough, a winking smiley face) after she posted a Temptation Island promo clip in which she's seen saying, "He's so handsome." Ashley responded simply with, "You're trouble" — something she also said during their flirty exchanges on the show.

Then again, Ashley tweeted that she's in touch with multiple guys from the season, so it's possible (however improbable) that Ashley and KB are just friends.

And Ashley isn't the only one who still talks to some of the cast members. Rick and Medinah also follow each other on social media. He even commented with some fire emojis on her Aug. 27 Instagram post, but again, it's unclear if he wrote that as a friend or something more. You can only tell so much from an emoji!

One person who is definitely not friends with Medinah is Ashley. The women have engaged in some heated exchanges on Twitter.

On Oct. 3, Medinah even posted a video of Rick kissing her... and tagged Ashley to make sure she saw it. And posted it again on Twitter.

Unfortunately, all that leaves us with is a whole lot of mixed evidence. But one thing that is clear? The Temptation Island drama is just as heated on social media as it is on TV.