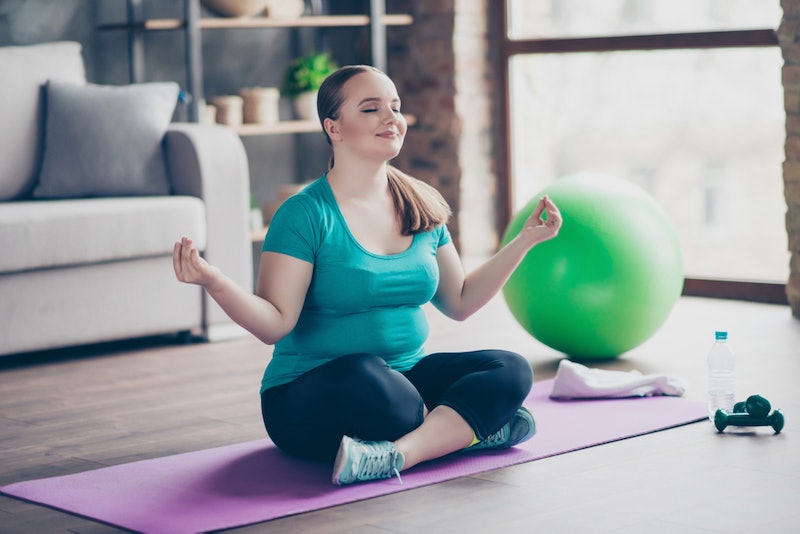 Here's the thing — you're not taking enough vacations. According to an analysis by Project Time Off, millennials take the least amount of vacation days compared to previous generations despite being given the most paid time off. Technology likely plays a role in this deficit. Even when you're away, you're still tethered to work via your best friend/worst enemy, also known as your phone. The good news is, according to a new study published in the Journal of Positive Psychology, meditating for 15 minutes a day can be as relaxing as one day of vacation.

Obviously, meditating is not as fun as going on vacay. But as someone who recently took her first non-working vacation in three years and who meditates every day, I can attest that my meditation practice relaxes me more than that vacation did. Because I have patched together a career that consists of multiple side hustles, and I don't have paid time off, I lost a week of wages by taking a vacation.

Not very relaxing. In addition, I returned to 700 emails that took an entire day to get through, and multiple projects that needed my immediate attention. I had to meditate just to be able to handle the aftermath of my vacation. Whether you have PTO or not, returning to work after a vacay can be so stressful that you might conclude taking time away simply isn't worth it. Same.

And while this whole millennials-not-taking-vacation thing is an issue for sure, it's unlikely to get solved any time soon. The study found that meditation provides similar benefits to taking a vacation. So even though I'll be working on my vacations, I can still get all the vacation feels by meditating.

"We examined the relative impact of 15 minutes of meditation compared to a day of vacation over eight weeks of daily life. On days participants meditated, they reported lower levels of negative affect as well as higher levels of well-being, positive affect, and the mindfulness facets of observing, describing, and nonreacting. We found similar associations of a day on vacation with all of the same outcomes except describing," the study reported.

Part of the reason meditation works is because it creates space in your brain between stress triggers and reactions. Over time, things that once worked you up into a frenzy won't bother you as much. However, to get continued benefits, you need to commit to meditating every day. The study found that just like the high of a vacation wears off, when you cease meditating your stress and anxiety can return.

And it goes without saying, you could use less stress in your life. Project Time Off noted that another reason millennials take fewer vacations is rooted in lingering economic fears. The report revealed that millennials are twice as likely as baby boomers to fear losing their jobs if they take a vacation. And being afraid of being out of work is not unfounded. I have friends with graduate degrees who have been looking for steady work for years. I mean, let's be honest, finding a full time job with benefits and PTO is basically the American dream of the 2010s.

While you're waiting for those dreams to come to fruition, mediation can be a pretty enjoyable way to pass the time. I use the app Insight Timer, which has tons of free meditations, all which can be done while lying down. This means I can meditate and take a mini nap at the same time. If lying down in the middle of the day is not your jam, you can also try an active practice like a walking or running meditation.

While I've gone through periods of meditating followed by long periods of not meditating, I've been committed to my current practice for a few months, and it's making a big difference. If you've been resistant to meditation, and taking a vacation is not an option for you, you have nothing to lose by giving it a try. Setting aside just 15 minutes each day to chill out might help you relax enough over time to feel less bajiggity about taking a real vacation. Because in case no one has told you lately, you totally deserve one.