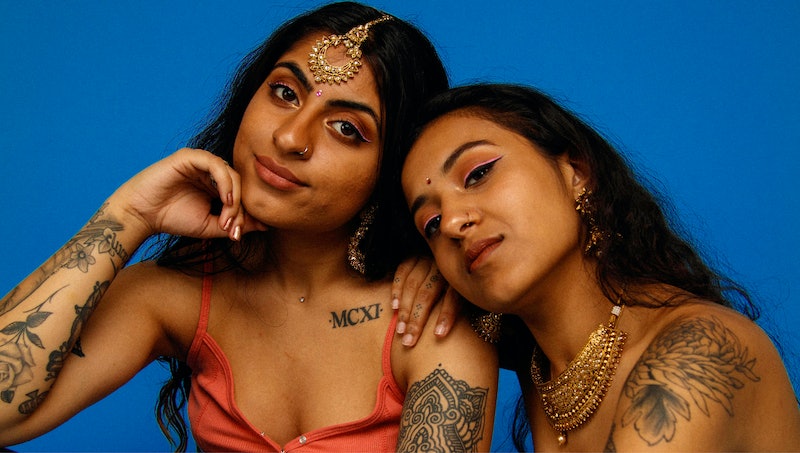 A cursory scroll of various tattoo studios’ Instagram pages and you could easily think tattoo patrons and artists are predominantly Caucasian. Rarely do #tattooartist or #tattoowomen feature designs on skin shades that stray beyond this. Even a glance at newsstand tattoo magazines reveals that they’re undeniably marketed to white audiences. Barely, if any, feature women of colour on their covers. Tattoos — and tattoo artists at that — it seems, are assumed to be the sole preserve – and interests – of Caucasian audiences.

It’s this stereotype that initially discouraged Leicester-based tattoo artist Heleena Mistry, one of the few women of South Asian heritage working as a tattoo artist in the UK, from considering a career in the industry. “I remember telling someone I wanted to be a tattoo artist and they laughed in my face,” she recalls. “I didn’t fit the stereotypical tattoo artist ‘look’ and to this day, I don’t. [I was told] that brown girls shouldn’t get tattoos, let alone do them on other people.”

Encountering a number of setbacks is the norm for aspiring tattoo artists, Mistry reveals. Apprentices are rarely hired and if so, they usually to perform menial tasks. Meanwhile, it wasn’t uncommon that she was expected to give 50 percent of her earnings to the parlour, thus making around £15 a tattoo, irrespective of how hard and long she worked on it.

Fears of not fitting in, given the invisibility of South Asian women in the industry at large, "made it even harder" according to Mistry. She recalls the stereotypes she faced in her first apprenticeship:

“My mentor told me that he’d only hired me because ‘Indians work hard’. Back then, I was ecstatic that being Indian benefited me. But now it fills me with rage."

London-based tattoo artist Nikki Kotecha, also one of the few women of South Asian heritage in the industry, acknowledges that the average tattoo shop can be daunting, given that it can be overwhelmingly inhabited by Caucasian men. In her career, she’s been fortunate not to have faced the same barriers Mistry initially did. “I work with white, middle-aged men but they don’t judge me for being different," she tells me. "They completely accept me.” The lack of representation of South Asian women in the industry also didn’t deter her: “I never gave it enough thought for it to put me off. I thought ‘I’m going to go in and make my mark’.”

Tattoos have long been stigmatised in Britain’s South Asian communities. This is odd, given that tattoos have a rich and historic tradition in the South Asian subcontinent. Lower-caste Hindus first tattooed their bodies and faces as an act of defiance and devotion a century ago after routinely being denied access to temples, while the Munda tribe continue to tattoo historical events on their bodies.

Even so, negative attitudes persist. The practice, for one, is considered synonymous with criminality among the older generation, Mistry reveals. She attributes this to the legacy of Western interpretations of tattoos. “Western colonisers deemed it to be savage and barbaric and now there’s barely any traces of Asia’s tattooing history,” she laments. Ironically enough, tattoos in the West today are now synonymous with self-expression. A 2015 study by YouGov found that 44 percent of adults in the UK wouldn’t think differently if they noticed someone sporting a large tattoo; on the contrary, they’re more likely to perceive them positively.

Tattoos, too, are assumed to be indicative of unemployment or an "inferior" job within this community, given that some "respectable" professions, including law or the police, have policies in place prohibiting visible ones. This could perhaps account for the invisibility of South Asian women tattooists.

With these assumptions in mind, it’s not uncommon for South Asian women to be routinely discouraged from "defacing" their bodies. Tattooed women are often derided as "unfeminine" or not "marriage material." The latter was certainly the case for Mistry. “My mum was worried that no one would marry me because of my tattoos and she thought my potential mother-in-law wouldn’t accept me,” she reveals.

The potential backlash their tattoos might elicit from their wider communities has compelled both women to carefully consider their clothing choices. “I often wear long sleeves in places or around people that I fear might not be accepting,” Mistry says. In Kotecha’s case, it’s to protect her immediate family. “I know they’ll judge, my grandparents and my mum,” she adds. “My mum’s a single parent and I wouldn’t want them thinking that she’s failed in bringing me up because I have tattoos, which is obviously not the case. [Otherwise] usually, I’d have no shame walking down the road with my tattoos on show.”

For some women of South Asian heritage, their tattoos can serve as a symbol of their reluctance to conform to the already problematic trope of a "Good Asian Girl." Conversely, this wasn’t the case for Mistry. She doesn't consider her tattoos transgressive: instead, they’re integral to her self-confidence.

“When I didn’t have tattoos, I had no self-confidence. I was incredibly insecure. But now I love myself and my biggest fear is that one day, I’ll wake up and my tattoos won’t be there anymore.”

Kotecha echoes these sentiments, maintaining that her tattoos have been instrumental in accepting herself, while simultaneously protecting her from the inevitable judgement she might face.

“I don’t mind getting them out in the gym. It makes me feel that people will look at my tattoos, not the little bit of hair growing or that I’m not in the most Instagrammable shape.”

For Mistry and Kotecha, tattooing also serves an opportunity for them to celebrate their heritage. For Mistry, reclaiming her pride in her background after decades of rejecting it is integral to her work and is deftly interwoven in her designs. Most are inspired by those she grew up with at home, including Mughal miniature paintings, block print tapestries, and Indian tribal tattoos.

“My designs are a way of reconnecting with my culture. I spent a large part of my life rejecting my heritage to fit in with growing up in Britain. But now I couldn’t be prouder of my culture.”

It’s a particularly hard-won achievement, not least as she recalls feeling compelled to compromise on this during the early stages of her career. “I drew a lot of Westernized, neo-traditional tattoos because I wanted to fit in with the very white dominated industry,” she recalls.

Her tattoos, she adds, evoke nostalgia, not just for herself but for her clients of South Asian heritage, who usually had similar imagery in their own homes. “We all grew up exposed to that traditional style of artwork,” she says.

For Kotecha, her childhood memories of having mehndhi, an ancient art form of henna painting, applied on her influences her work "massively." She does a lot of pattern work today, likening it to a permanent piece of jewellery.

Discovering Kotecha on Instagram was an "overwhelming" experience, according to Mistry. “I was so excited! She followed me and I looked at her profile picture and saw a brown girl,” she recalls. “I had to DM her instantly and rudely asked if she was Indian!”. For Kotecha, it was a relief to discover that “at least there’s two little fish in a huge pond!” While she’s relieved that she’s yet to face issues on account of her skin colour or gender, it’s comforting that Mistry would likely be on hand should she experience it in the future: “I’d have someone who’s probably gone through the same thing I have.”

Though both women might be providing much-needed representation for South Asian tattoo artists in the UK, brown women reclaiming tattoos as a form of self-expression seems to be a burgeoning movement Stateside and beyond. In 2016, U.S.-based Brown Girl Magazine highlighted the body art of their staff to "prove that brown girls get inked too." Meanwhile, the Heartwork Tattoo festival in India hosted its fourth edition last November.

The shift, albeit slow, is starting to take place on British soil. The most rewarding aspect of Mistry’s work is tattooing fellow brown women in the studio she now owns. “To me, there’s no greater honour than that,” she says. “I love how every day, I meet and talk to people that share the same love for Indian culture as I do and that same experience as me, in terms of being South Asian in the West. There’s a huge sense of community.”

Kotecha recalls one client travelling from Manchester “just to get tattooed by me because I’m a South Asian female tattoo artist”. Even so, she cautions that there’s still challenges ahead: “I can’t see [change] happening in the next two-three years,” she says.

“I’m tattooing a few South Asian girls that get tattoos in places they can hide from their parents. If that’s still happening, I don’t think there’s going to be a sudden influx of us coming out of the woodwork.”

While Mistry concedes that it’s "incredible" to be one the few female South Asian tattoo artists in the UK, ultimately, both her and Kotecha hope that they might encourage a new generation of women tattoo artists of South Asian descent after decades of their erasure from their industry. As Kotecha affirms:

“If I opened a doorway for other young South Asian women in the industry, I’d take that as a huge honour. I’d be like ‘that’s me, I helped do that’.”

“I’m proud of myself for going for what I wanted,” Mistry agrees. “But it breaks my heart that so many others felt they had to let their dreams go. Never give up if you want to tattoo or just have tattoos. Don’t let anyone discourage you. I really hope that I’ve [showed] you don’t have to fit the norm to be successful.”